Does Israel Have Something to Fear from Donald Trump? 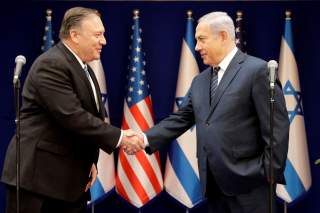 As a direct result of President Donald Trump’s precipitous withdrawal of American forces from Syria, Israel’s strategic situation deteriorated significantly overnight. In the preceding period, Israel was part of an informal anti-Iran coalition that includes Saudi Arabia as well as the United Arab Emirates and had the backing of the United States. There have been numerous and growing contacts among Israel and the Arab states, which for decades were among Israel’s sworn enemies. There were even some discussions that Israeli warplanes might refuel in Saudi Arabia on their way back from striking Iran. Trump’s peace plan was based on these Arab states recognizing Israel and pressuring the Palestinians to make major concessions.

All this is now history. The Arab states no longer assume that they have U.S. backing. (Indeed, they realize that even if Trump loses the election, they cannot necessarily expect better from a Democratic president. Bernie Sanders congratulated Trump on his decision to abandon the Kurds in order to get out of the Middle East. During the most recent debate, the Democratic candidates differed on how to get out of the Middle East—but not about the fact that the United States should quit.) The combined militaries of the Arab states are no match to that of Iran, and they are therefore rushing to find some way to accommodate Iran, the new dominant power in the Middle East. They are now quick to distance themselves from Israel, which Iran considers an evil incarnate.

The Israelis are concerned that Trump will change his mind about supporting them in the same cavalier way that he switched his position with regard to the Kurds. “The conclusion we draw needs to be unequivocal: Trump has become unreliable for Israel. He can longer be trusted,” declared Shimon Shiffer in a column in Yediot Ahronot, the Israeli newspaper with the widest circulation in the country.

Even before these recent developments, Israel faced what I call an asymmetric proxy war, to its disadvantage. In a typical proxy war, the major powers’ homelands remain unscathed while the proxies of each side are devastating each other. This was the case when South and North Vietnam were fighting each other while the USSR, China, and the U.S. homelands suffered no casualties. The same symmetry can be observed in the Korean War and when American and Soviet proxies were fighting each other in Afghanistan. Israel’s greatest immediate threat is from Hezbollah, an Iranian proxy, but Israel has no proxy to hit back. In a war between Hezbollah and Israel, Iran may well be able to remain out of the fray, despite some Israeli statements. (Saudi Arabia finds itself in the same pickle, as it fights an Iranian proxy, the Houthis, but has no proxies to do its bidding. Hence, the Saudis and the Houthis bloody each other while Iran is left untroubled.) All this requires some elaboration.

Hezbollah has amassed, with the help of Iran, some 150,000 missiles, many based in private homes. Iran is now moving to make these missiles much more powerful by equipping them with a precision guidance mechanism, and Hezbollah is building a factory for such guidance systems. Although Israel has slowed down this very significant increase in Hezbollah’s armament through numerous airstrikes, studies show that there are limits to what such strikes can achieve. Above all, now that the United States is withdrawing from northern Syria, Iran has a secure land bridge to supply Hezbollah. One must also note that Hezbollah now has several tens of thousands of highly experienced fighters. Moreover, Hezbollah has shown in Syria that it learned to engage in very large-scale operations, some involving as many as six thousand fighters. Nicholas Blanford, a Beirut-based journalist and author, noted that “Hezbollah may be the most formidable non-state armed sector in the world.”

The Israeli infrastructure and military are particularly vulnerable to missile attacks. If two of its water desalination plants are hit, then it would lose much of its water supply. Israel has only one international airport. As a very small country, Israel can hardly disperse it forces as a defensive maneuver. Its missile defense systems will be overwhelmed when they are challenged by a large number of missiles and decoys coming in at the same time. The Israeli standing army is composed to a large extent of high school graduates, the kind of kids we know as first-year college students. The reserves gain some fighting experience in Gaza and many show up for annual retraining. However, as one who served both as a combatant and as a reservist in the Israel Defense Forces (IDF), the training has rather limited value, and the reservists are very concerned about their families and businesses. Israeli intelligence is vastly overrated. Among the IDF’s many failures, it recently was unaware of the fact that Iran was mounting missiles to hit Saudi Arabia, and it was unable to trace their flights. Last, Israeli arrogance also exacts a toll. An investigation showed that the Israel military suffered many unnecessary casualties during its last incursion into Lebanon because it attacked in broad daylight. When Israel sent a warship to shell targets in Lebanon, it did not turn on its defensive measures and was severely damaged when Hezbollah unexpectedly fired an anti-ship missile.

One must also take into account that Israeli plans call for marching into southern Lebanon to neutralize its missiles. Bombing the Shia neighborhoods, which Israel did to serve as a deterrent, raised moral issues because of the civilian population involved, and experience shows that it will not stop Hezbollah. (After more than twenty days of fighting in the 2006 Israel-Hezbollah War, including Israeli bombing of Beirut, Hezbollah fired more missiles than in the beginning of the war, launching 231 missiles into Israel in just one day.) Additionally, Hezbollah will have the great advantage of an army that is attacked in its homeland. Hezbollah is extremely well-prepared for Israeli attacks; it dug many tunnels that allow it to attack troops from areas they believed they cleared, laid redundant fiber-optic cables to provide for secure communications, and fortified many defensive trenches.

If Israel lives up to its threat to hit Iran, then it would have to divert some of its forces already engaged in a tough fight with Hezbollah. Firing some missiles from submarines will not cow Iran, which stood up to eight years of attack from Iraq. And if Israel strikes Iran even if it is attacked only by Hezbollah, then it would bring Iran into the war at a time when Iran is making considerable advances in its missile technology and cyber capacity. If Israeli civilian casualties mount, if high-rise buildings in Tel Aviv are flattened or go up in flames, and if people jump out of the windows as they did in NYC, as practically all analyses expect, then Israel may be driven to engage in extreme measures. It is reported to have loaded nuclear weapons on its planes when it was overrun by Egypt and Syria during the Yom Kippur War.

In short, the removal of American troops from northern Syria is like one of those rather small pebbles whose movements can trigger a devastating avalanche.

On a personal note, someone recently used the comment section at the bottom of one of my op-eds to describe me as an Israeli Zionist Jew. I hold that arguments cannot be refuted by pointing to who made them. For the record, I became an American citizen in 1963 and served in the White House, which required FBI clearance. I am a Zionist, which means that I believe that Jews, like all people, are entitled to a state—as are the Palestinians.