Does Kafka's 'The Trial' Have Lessons for Today? 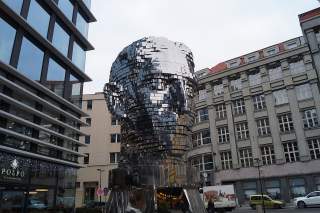 Paata Tsikurishvili, the founding artistic director of Synetic Theater in Arlington, Virginia, is famous for his wordless productions of plays ranging from Shakespeare to Moliere to Dante. His cast of actors fuses mime, dance and music to create dramas that may refer to the present but have an artistic merit that also transcend it. The theater is known for its avant-garde approach and symbolic vision, which carry viewers into a deeper understanding of the plays.

When I interviewed Tsikurishvili this past weekend, he noted that “there are times when we have to keep silent, and there are other times when we just can’t, when we have to speak up.” Tsikurishvili’s production of Franz Kafka’s novel The Trial, which was published posthumously in 1925, is a case in point. The play recently concluded its run at Synetic, where it featured the surrealism, disorientation and overwhelming sense of dread that one would expect from Kafka. Kafka, a German Jewish novelist who lived in Prague during the final decades of the Austro-Hungarian empire, focused on themes of despair, alienation and solitude. The term “Kafkaesque” has itself become a synonym for a nightmarish and illogical situation. In a diary entry, Kafka wrote, “Enclosed in my own four walls, I found myself as an immigrant imprisoned in a foreign country.”

In Tsikurishvili’s captivating production, which imagined protagonist Josef K. as the lone human in a world populated with anthropomorphic insects, the messages conveyed by the performance is loud and clear. Tsikurishvili’s play ran against a compelling national political backdrop of ongoing debates surrounding government surveillance, and questions about the inherent fairness of the legal system. There is no question that global terrorism and other threats have made it necessary to increase surveillance, but their impact on human liberty and dignity also raises real and serious questions.

The play introduces the protagonist with a sudden and immediate state invasion of his privacy when two police officers, displaying no form of identification and carrying no warrant, accost and arrest him in his home. Josef’s possessions and his person are both immediately subject to seizure by the state, despite there being no evidence that Josef has committed any actions to justify such harassment. At various points, officers of the court seem obsessed to learn what Josef, portrayed as a fictional manifestation of Kafka himself, is writing about, and express an entitlement to be a party to Josef’s most sacred and intimate thoughts. Josef is allowed to move freely about town despite having been arrested, but only because the court’s constant surveillance of his person guarantees that the authorities can track and monitor him as easily as if he were physically detained. A conversation between Josef, who is ostensibly a free man, and a priest revealed to be acting in his capacity as the prison chaplain clearly illustrates the extent to which Josef’s autonomy exists in name only.

The ease with which the government could violate Josef’s privacy almost inevitably evokes an image of the modern surveillance state. The court created by the Foreign Intelligence Surveillance Act (FISA) has approved a staggering 99.7 percent of warrants since its inception, and the same law allows for the warrantless collection of “hundreds of millions of video chats, instant messages, and emails under Section 702 by compelling companies like Facebook, AT&T, and Google to hand them over.” Furthermore, Executive Order 12333, originally issued by President Reagan to allow for foreign-intelligence investigations, has subsequently been broadly interpreted to allow for the collection of billions of mobile phone location records. This action, combined with the pervasiveness of state-run video surveillance and the increasing use of facial recognition technology by law enforcement agencies, reminds one that, like Josef K., they need not be physically detained to have their whereabouts and actions closely monitored.

Equally striking is the opaque nature of Kafka’s court. The court’s proceedings occur in camera and on their own schedule, often rendering Josef a passive participant in his very own trial. The audience is told that “someone must have been telling lies about Josef K. He knew he had done nothing wrong but, one morning, he was arrested.” But no explanation is ever provided for what crimes Josef is purported to have committed—or who even accused him.

Similarly, the American justice system has become increasingly comfortable operating behind closed doors. FISA court hearings are conducted in a clandestine fashion, creating what the New York Times editorial board referred to as “a secret and unchallenged body of law on core Fourth Amendment issues.” Additionally, just as Josef is denied the ability to raise a meaningful defense against his unknown accuser, the Seventh Circuit Appeals Court ruled in 2014 that defense counsel could not review classified evidence gathered against their client under FISA, preventing them from truly contesting the charges. The term “Kafkaesque” has come to embody the absurd dread associated with struggling against a force designed to disrupt any efforts to navigate it successfully, and there is perhaps no better term to describe the prospect of mounting a serious defense against a secret court system that shields its evidence and reasons behind closed doors.

Finally, it is difficult for viewers of Tsikurishvili’s version of The Trial to escape the sense that the persecution of Josef is somehow personal. As the sole human in a world of insects, Josef visually stands out as divergent from the hive, further explaining the fascination the authorities have with reading Josef’s written works. While the audience is never told what crime Josef is said to have committed, the play renders this question entirely irrelevant by presenting Josef’s guilt as ontological. In the words of Tsikurishvili, himself an immigrant from the former Georgian Soviet Socialist Republic, The Trial “illustrates the interior life of those who are persecuted, with the collusion of the authorities, for no reason except who they are.”

Josef’s final monologue, delivered at the point of his execution, acknowledges that everyone is “out there” and vulnerable to some form of persecution when the state, comprising an impenetrable and all-encompassing bureaucracy, can target individuals on the basis of their thoughts, beliefs or identities, as many states have done in the past. While it would certainly be an intellectual disservice to interpret a piece as complex as The Trial exclusively as a critique of the bureaucracy or the legal system, the works of both Kafka and Tsikurishvili do point to some parallels. Though impossible for Kafka to envision the states that would emerge in the years following his novel’s penning, the knowledge that we possess the technologies to carry out a “trial” akin to that of Josef K. forces the modern audience to consider, for better or worse, the scope of the system that we created for ourselves.

In meditating on the role that artists such as Kafka can yet play in such political discussions, Tsikurishvili aptly invokes Bertolt Brecht: “Art is not a mirror to reflect the world, but a hammer with which to shape it.”