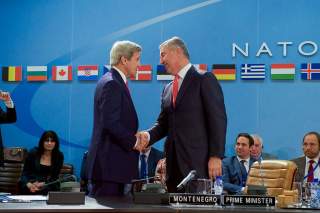 If all goes as planned, Montenegro will be the newest member of NATO. According to NATO Deputy Secretary-General Rose Gottemoeller, “The accession process is moving forward smoothly” and “pending all those parliamentary processes being complete” Montenegro could become a NATO member in the spring of 2017. But how does the tiny Balkan nation of Montenegro contribute to NATO’s collective security and – by extension – U.S. security?

The short answer is: It doesn’t.

There are currently 28 countries in NATO. Outside of the United States and Canada, they are all European nations. If European defense is the raison d’être for NATO, it’s hard to see how Montenegro contributes to the alliance. The combined GDP of NATO’s European members is over $17 trillion. With a GDP of $4 billion, Montenegro’s economic capability to contribute to NATO is infinitesimal. Indeed, Montenegro’s GDP is about a third the size of Albania’s, NATO’s smallest economy.

Rather than adding a country with such a tiny economy, NATO would be better off getting all of its member nations to meet the 2 percent of GDP defense spending requirement. Right now, the only countries spending at least that much are the United States, Greece, Poland, Estonia and the United Kingdom. Germany – NATO’s largest European economy – spends only about 1 percent of its GDP on defense. The resulting shortfall of Germany and other countries not contributing their fair share to NATO is something like $100 billion. So adding Montenegro will do little to close the deficit.

And with a military consisting of some 2 thousand active duty service members, the Montenegrin Army, Navy and Air Force – such as they are – are not going to add any significant military capability to NATO.

From a U.S. perspective, adding a country like Montenegro to NATO is a negative prospect. First, Montenegro doesn’t add any real capability – economic or military – to the alliance. Second, under NATO’s Article 5, the United States could be obligated to defend a country that is irrelevant to U.S. national security. Not that anyone is threatening Montenegro, but if the country were invaded by a foreign power – even Russia – it wouldn’t make the United States any less secure. So why should the United States risk war with a foreign power – including Russia – over a country that doesn’t matter to U.S. security? Moreover, Montenegro would be yet another European country not spending 2 percent of its GDP on defense – meaning even more freeriding at U.S. taxpayer expense.

If anything, adding Montenegro to NATO is potentially dangerous since Russia is not too keen about the prospect. Indeed, Russia has warned that Montenegro’s accession would result in unspecified “retaliatory actions.” But why poke the Russian bear? Russia is not a direct military threat to the United States or even to Europe. Its military is a pale shadow of the former Soviet Union’s and – despite annexing Crimea and military intervening in Ukraine – Russia is not threatening to invade and overrun Europe. Given that NATO’s European members’ GDP is more than ten times Russia’s and they spend about five times more on defense, calling Russia a threat to Europe borders on hyperbole.

That said, Russia still has nuclear weapons and that last thing the United States needs to do is needlessly antagonize the one country in the world that poses a potential existential threat. Nor would it help to fuel the paranoia that the United States and NATO are trying to encircle Russia (not an unreasonable assumption if the situation were reversed.)

Charles V. Peña is a senior fellow with Defense Priorities. He has more than 25 years of experience as a policy and program analyst and senior manager, supporting both the Department of Defense and Department of Homeland Security. Peña is the former director of defense-policy studies at the Cato Institute and author of Winning the Un-War: A New Strategy for the War on Terrorism.