Does Poland Hold the Master Plan to Scare Off a Russian Invasion? 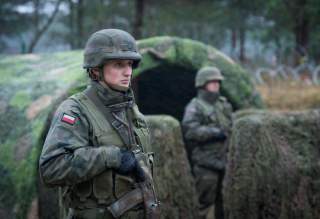 The war in Ukraine has rightfully jarred military planners into reviewing effective deterrence strategies. The tried-and-true method of simply moving more troops to the front lines is no longer an effective deterrent. In particular, eastern European NATO members need to address asymmetric and conventional means of Russian force projection. New defense strategies must also be reconciled with the reality of American war weariness. The primary method of deterrence in eastern Europe should build on Poland’s militia initiative. It would include three components: augmentation of the regular army with militias, improved antiair capacities and formalized civil resistance. This asymmetric approach would enable Europe to take responsibility for its own defense, reduce costs for the United States, make any possible incursions by hostile forces unpalatable and provide reassurance to Moscow of NATO’s peaceful intentions.

Despite hysteria about hybrid warfare, there is substantial evidence that Russia is not engaging in anything particularly revolutionary or new. By blurring the line between war and peace—the “gray zone”—Russia has conducted war in all but name. While it is tempting to think that more U.S. troops on the border would prevent any Russian incursion, this notion is flawed. Eastern Europeans are quick to forget the conundrum of U.S. war weariness and questions of NATO’s relevance. Many Americans seem to believe that U.S. troops should be seen as force multipliers for European armies, not core combat units. President Obama and Donald Trump have expressed similar concerns over supposed free riding by allies. Creating more militia units, as Poland is doing, could help to ossify and diversify a strong core of native assets for European defense.

Utilizing militias and focusing on defensive forces has two major benefits. The first is that having units in which citizens are trained part-time as soldiers and focus exclusively on defense is significantly cheaper than sending more U.S. soldiers to defend European territory. Many eastern Europeans appear eager and willing to volunteer to defend their homelands, with Poles again being the primary example. Supplying volunteers with training and uniforms is surely more cost effective—politically and financially—than more American troops. Additionally, this asymmetric counterinvasion force would more realistically account for possible military scenarios that may unfold on Europe’s eastern flank. The second major benefit of militias is that they would help to better combat “little green men” and, particularly, “volunteers.” This phenomenon makes it difficult to distinguish between Russian irregulars and civilian combatants. Local militias could suss out such forces and would be more capable of rapid reaction than the regular army.

Such militia units would be best suited for training in guerilla warfare; Survival, Evasion, Resistance and Escape (SERE); antivehicle measures; and reconnaissance. These skill sets would ensure that an invasion force would be extremely limited in its ability to conduct operations and resupply. Control of the border would also be paramount, and these asymmetric units would make travel across the border incredibly difficult for invaders. On-the-ground assets to provide intelligence—another area of possible training—would be incredibly useful in buttressing the regular army. If all-out war occurs, U.S. airpower would be critical to reestablishing control over territory, and militias would be invaluable in helping to locate antiaircraft artillery (AAA). These militias, further, could function as spotters for artillery systems. Combined with the use of small-scale drones for surveillance—as seen in Ukraine—precision artillery strikes would make any military excursion incredibly costly.

As Russia has been focusing on anti-access/area denial (A2/AD), it would be cost effective and advantageous to beat them at their own game. Deploying AAA in Poland and the Baltic states would make reinforcement of Russian positions nearly as perilous as it would be for NATO allies to move into the Baltics under a Russian A2/AD umbrella. Additionally, AAA would discourage Russian flybys and aerial incursions. Russian state media—ever eager to hyperbolize the threat of the antiballistic missile shield in eastern Europe—would find it difficult to construe such measures as aggressive. While it could, “theoretically at least,” pose a threat to Russia, the case for interpreting AAA as aggressive is tenuous at best.

Despite being reported with a pinch of sarcasm, advice from the Lithuanian defense minister could also be extremely useful in deterring a potential Russian attack. According to Juozas Olekas, engaging in passive sabotage and “doing your job worse than usual” would tank the economy, rendering occupation unsustainable. The Ukraine case has demonstrated that tenacious civilian resistance can inflict a heavy burden on an occupying force. Considering the difficulty in controlling what amounts to approximately two provinces in Ukraine, it is not unimaginable that any further potential territory grab in Europe would be just as costly or even costlier. A nationwide program informing the public on how to disrupt and nonviolently resist would ensure that the financial costs of trying to seize territory by force would outweigh the benefits. A scaled down version of Finland’s concept of total defense could be a jumping-off point.

Calls for more U.S. and European troops in the Baltics are misguided. A recent war game conducted by RAND concluded that the Baltic nations would collapse in the face of a Russian invasion. While these war games operate on shaky assumptions over Russian motives, defending the Baltic territory is, indeed, precarious. Any realistic strategic planning should assume that this area is essentially indefensible. The focus needs to be on how to counterattack if full-blown war occurs.

If the Russians ever decided they wanted to deal with the aforementioned militias and civil resistance, they would have to deal with the full force of NATO as well. Rather than positioning U.S. military forces, already spread thin across multiple theaters, in the Baltics, NATO would be well advised to station rapid-reaction forces in Germany or Poland. Having tank battalions and the rapid-reaction forces ready to counterattack, but not directly stationed in an indefensible area, would prevent the forward troops from either being annihilated or requiring evacuation à la Dunkirk.

In short, this three-tiered strategy of territorial defense would be difficult to construe as aggressive. It is easy to paint Moscow as the antithesis of European values, but it is a necessary part of the security equation on the continent. Formulating an explicitly defensive strategy might even help convince Russian elites that NATO is not, in fact, conspiring against Moscow. This would, in turn, provide eastern European NATO members with a degree of comfort, while cultivating conditions amenable to cooperating with Russia on wider international security and reducing costs for the United States in Europe’s defense.

Blake Franko is assistant editor at the National Interest.