Does Putin Want a War? 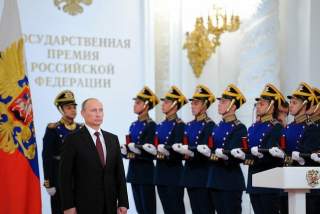 Does Vladimir Putin want war with Ukraine? Given Moscow’s failure to help implement the April 17 Geneva statement and its bellicose tone, it is increasingly difficult to escape that conclusion. The United States and Europe need to apply sterner sanctions immediately if they hope to have any chance of dissuading Mr. Putin from more aggressive action.

Russia illegally occupied Crimea by force in March. The Kremlin, however, wants more than that peninsula. It seeks a weak and compliant Ukrainian neighbor, a state that will defer to Moscow and not develop a significant relationship with the European Union.

Since annexing Crimea, Moscow has done nothing to defuse tensions. It has instead sought to destabilize the interim government in Kyiv, piling on economic pressure and keeping tens of thousands of troops on Ukraine’s border. The Kremlin has supported—by all appearances, with Russian special forces personnel—armed seizures of government buildings in eastern Ukraine. In these operations, local politicians and reporters have disappeared, and at least one was murdered.

The April 17 meeting of the U.S., Russian, Ukrainian and European Union foreign ministers offered a chance for a diplomatic solution. Little appears to have come of it. One week later, Russia has done nothing to get illegal armed groups in cities such as Donetsk or Slavyansk to disarm or evacuate the buildings that they occupy. Indeed, the Kremlin’s agreement to the statement seems to have been to delay further sanctions from the West while continuing to run an insurgency in Ukraine’s east.

Mr. Putin last week denied Russian soldiers are present in the buildings. His denial must be dismissed. It came in the same telethon in which he admitted that Russian troops had seized Crimea—in contrast to his March 4 press conference, in which he attributed that seizure to “local militia” and denied the involvement of Russian soldiers.

If Moscow wanted to deescalate the crisis in Ukraine’s east, it clearly could have done so. Instead, Foreign Minister Sergey Lavrov threatens military action if the Ukrainian government moves to secure its own cities. It almost appears that Russia wants a pretext to use force.

A Russian military invasion of eastern Ukraine would differ greatly from the Crimea operation. The Ukrainian military may be under-resourced and out-gunned, but it would fight. Some civilians would take up arms. Recent polls show that an overwhelming number of people in eastern Ukraine do not want the Russian army. It could be ugly and bloody.

In that case, the West almost certainly would slap harsher sanctions on Russia. But they would come too late to help Ukraine or prevent a total crash in West-Russia relations.

Some U.S. and EU sanctions, focused on individual Russians and mostly applied in the aftermath of the March annexation of Crimea, are in effect. They have had some impact. According to the Russian finance minister, Russia’s economy this year may experience zero growth while capital flight in the first quarter reached $50 billion. The Russian Central Bank has burned through billions of dollars defending the ruble.

But the sanctions thus far have failed in their primary purpose. Mr. Putin’s aggression against Ukraine continues. He apparently calculates that, by creating facts on the ground “covertly,” he can ensure a weaker Western response that he can weather.

If Washington and Brussels wish to change that calculation, they must now apply additional and more meaningful sanctions.

First, the United States and European Union should greatly expand the list of individual Russians—inside and outside of government—targeted for visa and financial sanctions. Sanctions should apply to family members as well.

Second, the West should sanction key parts of the Russian economy, beginning with its financial sector. It should target at least several Russian financial institutions. The European Union, particularly Britain, must join in, with the aim of halting international credit to Russian entities. That would further stress the slowing Russian economy.

Third, the United States and European Union should block their energy companies from new investments to develop oil and gas fields in Russia. With Moscow dependent on oil and gas sales for seventy percent of its export earnings, such a measure would send shudders through the Russian energy sector.

Since coming to power in 2000, Mr. Putin has offered Russian citizens a trade-off: diminished individual political space in return for economic growth and rising living standards. The West should undermine his ability to deliver on the economic side. Mr. Putin may retaliate, but the combined economies of the United States and European Union dwarf Russia’s by a factor of well over ten to one.

This is a menu of serious actions. Mr. Putin’s continuing aggression against Ukraine calls for a serious response. A failure to act now will allow him to believe that he has a free hand regarding Ukraine. That is not in Ukraine’s interest, or the West’s.