Does Rubio Know What He's Doing? 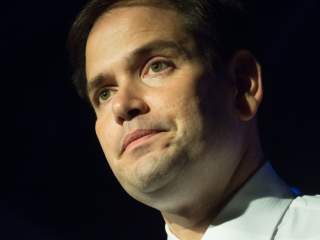 Does Marco Rubio know what he’s doing? Apparently not, at least during last night’s debate in New Hampshire. Three times he responded to New Jersey Governor Chris Christie’s blitzkrieg attacks that he’s a trained puppet by reciting, “Obama knows what he’s doing.” Christie was openly contemptuous of Rubio, treating him like a teenage boy. The choice of the word “truancy” to describe Rubio’s failure to vote on anti-terrorism legislation was hardly accidental.

Until the debate, the forty-four-year-old Cuban-American senator seemed like the candidate on the upswing, the antidote to Jeb Bush’s low-energy. He has everything the establishment in the GOP admires, which is why a phalanx of billionaires, including Paul Singer and Sheldon Adelson, seem receptive to him. A neocon foreign policy—his advisers include Elliott Abrams, Robert Kagan, Max Boot and Jamie Fly—a milder policy on immigration than his adversaries and a willingness to intervene abroad whenever and wherever he pleases add up to a rather truculent would-be commander-in-chief. Donald Trump was quite right to remind the audience that he had not supported the war in Iraq and that “I’m not the one with the trigger. Other people up here, believe me, would be a lot faster.” Consistent with his tough guy stance, however, Trump also lauded the merits of waterboarding and “a hell of a lot worse. . .”

For all his foreign policy truculence, Rubio is careful to wrap it in the gauze of a ‘new American century,’ as far as possible. Rubio seems, or seemed, like the guy who could sand off the sharp edges of the GOP in a general election. But if last night’s performance is any indication, Hillary Clinton—maybe even Senator Bernie Sanders—would likely make mincemeat of him on the campaign trail.

The fact is that Rubio, like House Speaker Paul Ryan, has been a professional politician for most of his life. It’s unclear what he’s actually done other than campaign for office and receive donatives from the likes of his mentor Norman Braman, a wealthy Miami car dealer. Braman's munificence apparently even extended to hiring Rubio’s wife to work as an adviser to his philanthropic foundation, according to the New York Times.

Still, Christie may have been slightly unfair when he said that Rubio has never made a “consequential decision.” Actually, he has. He’s aligned himself, more or less, with the potentates of the GOP, which helps to explain his avidity for Israel, his eagerness to intervene abroad and his somewhat more emollient domestic stands. When Jeb Bush tried to corner Rubio on the question of abortion, Rubio quickly pivoted to a softer stance, indicating that while he personally opposed abortion in cases of rape, incest and life of the woman, he would approve a bill that contained provisions making exceptions for them.

But it seems doubtful that the debate last night will actually prove decisive in determining the fortunes of the candidates. There are, at this counting, seven of them. The assaults on Rubio may even the score a bit, but no knockout blow was delivered, at least for now. The candidates seem to be engaging in a serial form of political tag teaming. Whoever is the frontrunner next week will get the treatment that Rubio just received. If Trump is up, then everyone will pile on him next week. And so on. This makes for great theater and even greater television ratings. But does it serve the interests of the Republican Party? Reince Priebus, the head of the Republican National Committee and his cohorts, must be groaning in despair. The whole point of this primary was to try and anoint a frontrunner early on, then target Hillary Clinton.

Instead, it appears that the GOP race could go on inconclusively for months, as long as the candidates are willing to gut it out. If Ohio Governor John Kasich or Jeb Bush makes what is perceived as a good showing in New Hampshire, then the media will get to toy with a new comeback kid for a week or so. The febrile state of the GOP primary race continues to suggest it will result in a raucous convention this July in Cleveland.