Does Russia Want War With Ukraine? Not Really—Or Not Yet 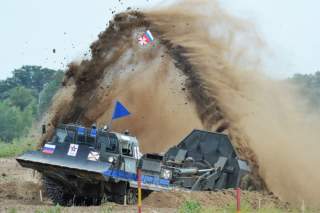 The recent escalation of hostilities in eastern Ukraine’s Donbass region and increased military-political tensions around Crimea bring to mind the refrain of a popular song from the times when both these territories were still part of one country: “Do Russians want war?” Upon examining conflicting reports of allegations that Ukrainian agents crossed into Russian-controlled Crimea on August 7 to attempt acts of sabotage and of Russia’s reaction to that alleged incursion, my answer is: “Not yet.” While pro-Russian forces in Donbass may be ratcheting up armed violence, the “full-scale Russian invasion” feared by Ukrainian leaders appears unlikely, if only because no territorial gains, short of an occupation of Kiev, would advance Russia’s main, minimally acceptable demand vis-à-vis Ukraine: the latter’s military-political neutrality.

A number of questions about the events of August 7-9 in Crimea remain unanswered to date. Did Ukrainian saboteurs clad in camouflage fatigues really sneak into Crimea under cover of night August 7-8 to realize an evil plot for “killing tourism” in the peninsula, as Russian authorities insist? Or did Russian secret services kidnap an innocent Ukrainian citizen and force false confessions out of him, as Ukrainian law-enforcers would want us to believe? Russia seems to have produced greater volumes of what Russian Foreign Minister Sergei Lavrov has described as “irrefutable evidence” of the alleged Ukrainian sabotage. Yet Kiev continues to deny that any Ukrainian “green men” crossed into Crimea. In doing so, the Ukrainians may be borrowing a page from the Russians’ own playbook for Operation Crimea-2014, which redefined the notion of what constitutes a covert operation: In an age when multiple nations maintain 24/7 eyes in the sky, “covert” is no longer what you manage to expertly conceal, but what you staunchly deny.

The disagreements between Moscow and Kiev on whether there were any armed skirmishes in Crimea at all and, if so, which side initiated them, did not stop international media from sounding alarms that a war may soon break out between Russia and Ukraine. “Putin looking for ways to ‘justify a war’, Ukraine warns,” screamed a headline in the August 10 issue of Britain’s Independent. “Is this a prelude to another Russian military campaign?” long-time Russia watcher Owen Matthews wondered in Politico on August 14. Indeed, Russia’s reaction to the incident gave journalists and pundits plenty of reasons to believe a war might be imminent. Vladimir Putin sounded very belligerent in his reaction to the incident, vowing that Russia will respond with “serious additional measures” to what may have been the first intentional firefight between regular Russian and Ukrainian soldiers that Russia has acknowledged since taking Crimea. “We obviously will not let such things slide by,” Putin warned on August 10 as he ordered reinforcements into Crimea and announced he would not attend the so-called Normandy Format peace talks on Ukraine next month. Putin’s remarks were followed by equally combative statements by his ministers. Putin’s Prime Minister Dmitry Medvedev said Russia might break off diplomatic relations with Ukraine, while the Defense Ministry announced military exercises in the Black Sea and Mediterranean. Finally, a source close to the Russian Defense Ministry told Russia’s Vedomosti newspaper that Moscow may “cease to hold back the actions of the army of the Donetsk People's Republic” (DNR). Reports of Russian troop deployments in the south have also raised concerns. In an August 12 report the Institute for the Study of War claimed that Russian troops were deploying near Donetsk. “An ongoing Russian military build-up on Ukraine’s borders may indicate preparations for conventional military conflict,” this U.S.-based organization warned. And on August 17 the Free Beacon’s Bill Gertz claimed the Pentagon has identified eight staging areas in Russia where large numbers of military forces may be preparing for crossing into Ukraine. Most recently, on August 18 the Financial Times reported claims by Ukrainian intelligence that a Russian air defense regiment has been “embedded” with DNR forces and that a trainload of Russian tanks has arrived at the Ilovaisk railway station located to the east of Donetsk. All these Russian words and movements obviously didn’t escape the attention of Ukrainian president Petro Poroshenko, who warned on August 18 that a “full-scale Russian invasion” is possible.

Invasion Not Impossible But Unlikely

In my view, however, while not impossible, a full-blown Russian invasion is rather unlikely because it won’t satisfy the essential minimal demand that Russian leaders formulated vis-à-vis Ukraine in the early stages of the conflict and that remains valid to date: the “neutral military-political status” of Ukraine. A hypothetical invasion would not advance Russia’s vital interest in having neutral neighbors unless it culminates in Russian tanks rolling along Kreshchatik to replace the government in Kiev, which is something Russia can accomplish but won’t because such an occupation would most definitely cause Western countries to impose significant long-term costs on Russia. Russia is more likely to channel its response via proxies. For instance, pro-Russian separatists in Donbass may be encouraged to escalate violations of the ceasefire established by the Minsk-2 agreement.  Casualties from such violations have already exceeded last year’s levels and both sides are now accusing each other of having resumed the use of heavy artillery this week.

If this escalation is indeed managed from Moscow, then it is probably meant to signal to Kiev that the conflict is not frozen and that Moscow wants Kiev to integrate Donbass on Russia’s terms. At the same time I believe Russian leaders would be reluctant to back or condone any major offensives in Donbass on the scale of the August 2014 counteroffensive at Ilovaisk, as such operations would bury whatever hopes Moscow has that the EU may lift some of the sectoral sanctions set to expire in January 2017, without achieving any qualitative improvements for Russia in this conflict. Moscow realizes that in the event of such an offensive by the separatists, it would be Kiev collecting political dividends thanks to reignited Western support in place of the Ukraine fatigue now once again spreading among Western leaders. The pro-Russian separatists, meanwhile, benefit from any major escalation in the conflict because it stymies Russian leaders’ ability to pressure them on the terms for reintegrating with Ukraine. Whether Moscow’s leverage vis-a-vis the separatists is sufficient to prevent such opportunism is unclear.

In contrast, if Russia ensured there were no major escalation in Donbass while also producing plausible proof that Ukrainians did cross into Crimea, then Western countries would be more amenable both to lifting sanctions and to pressuring Ukraine to fulfill its obligations under Minsk-2, including its clauses on decentralization. In fact, in my view, Russia’s reaction to the Crimea incident, including the belligerent rhetoric and troop build-up, serves to signal to Poroshenko that he needs to start delivering on Minsk-2, so that Donbass can be reintegrated into Ukraine as an autonomy and serve as an impediment to Ukrainian attempts to enter NATO.  Poroshenko is obviously not content with such a scenario—hence Kiev’s tactics of stalling on implementation of some of its key obligations under Minsk-2 while blaming Moscow for the separatists’ failure to implement their obligations. Many in Kiev see Donbass as an obstacle and would be happy with the current arrangement under which Moscow has to bear the burden of propping up the region and Donbass has no way of directly participating in Ukraine’s national politics.

Should Ukrainian leaders continue to ignore these signals, however, Moscow could eventually be expected to condone a major escalation in Donbass to intensify pressure on Kiev to deliver on Minsk-2. But even then the end purpose of any Russian-backed major offensive or territorial gain would be to coerce Ukraine into accepting Russia’s demand rather than simply to gain more land. After all, the last thing the world’s largest country needs is more land.