Does Saleh's Death Signal the End of the Yemen War? 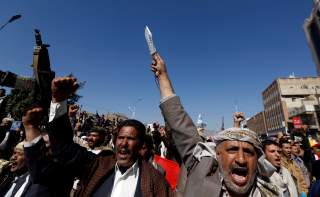 Ali Abdullah Saleh’s violent death on December 4, after a weekend of intense conflict in the Yemeni capital, Sana’a, brings to an end the remarkable three-decade-long career of Yemen’s most dominant political leader since the establishment of the Republic in 1962. He will be remembered for both the good he did, such as engineering Yemen’s unification in 1990 and promoting many of the steps to modernize the country over the course of his rule, but he will be remembered for some bad things, too. Saleh’s corrupt reign deprived Yemen’s people of billions of dollars that could have been used to advance its social and economic development, and his failure to foster real institutional development left the country ill-prepared to carry on after a popular uprising in 2011 forced him from office.

Not content to retire quietly after his resignation in 2012, Saleh maneuvered continuously to undercut his successor, Abdu Rabbu Mansour Hadi, and to obstruct the political transition he accepted in 2011. Ultimately, his effort to regain his position at the top of Yemen’s political hierarchy led to his improbable alliance with the arch-rival Houthis. It was never a comfortable arrangement, and as the years of conflict ground on, the level of distrust between the parties grew until the Houthis successfully isolated and marginalized him. It was that reality that led to Saleh’s dramatic “Hail Mary” gambit over the weekend to renounce his Houthi allies and seek a rapprochement with the Saudis and their coalition. It was quintessential Saleh, “the man who danced on the heads of snakes,” and it failed spectacularly.

Where does this leave Yemen? Probably not in a greatly different position than it was in before the weekend’s events. While Saleh had joined with the Houthis in 2014 as a co-equal and brought military capability and tribal support to the partnership, the Houthis had successfully eliminated his advantage over the ensuing months and years. Infiltrating pro-Saleh military units, including the Republican Guard, the Houthis replaced Saleh loyalists in the officer corps with their own followers. When the conflict started, it was Ali Abdullah Saleh’s forces that were able to utilize Scud missiles in the fighting, including cross-border attacks into Saudi Arabia. In recent weeks, it is clearly the Houthis who are in command of Yemen’s Scud arsenal, benefiting from training and assistance from the Iranian Revolutionary Guards and Hezbollah elements. While the remaining units loyal to Saleh may abandon the Houthis and join forces with the anti-Houthi coalition, it’s not clear that their defection will alter the balance in the year-long military stalemate between the Houthis and the government/Coalition forces. Tribes, forever with their finger to the wind, will be reluctant to commit to an anti-Houthi uprising absent some clear sign that the effort will succeed.

Similarly, it is too early to judge if or how the end of the Houthi-Saleh coalition will affect prospects for a political resolution of the conflict. Although many Yemenis and the international community had long hoped that Saleh would bring the Houthis to the negotiating table and help strike a deal to restore the political transition, that optimism always appeared exaggerated. Through three rounds of UN-sponsored negotiations, there was no evidence that Saleh had any influence on Houthi negotiating positions.

But, in eliminating Ali Abdullah Saleh, the Houthis have introduced a complication into their situation. His absence from the scene does deprive the Houthis of an important symbolic presence that gave them some credibility as a broad-based movement that advocated good government and opposed corruption. Without Saleh, the Houthis will be perceived more nakedly as a pro-Iranian, sectarian Shi’a movement with millenarian aspirations to reestablish the Zaydi Shi’a Imamate that ruled North Yemen until 1962. This is not a vision that will appeal to most Yemenis. Thus, the Houthis are likely to suffer a further decline in their popular support, which was already waning as a result of the never-ending conflict, their rising involvement in corruption, and their violent, abusive tactics against the civilian population. The big question is whether this new reality will force them back to the negotiating table or lead to their further intransigence.

The Yemen civil war will eventually come to a conclusion as all wars do. One further consequence of Saleh’s assassination will be the effect it will have on the political movement that he founded—the General People’s Congress or GPC—which for thirty years has been Yemen’s governing party. When the time comes to bring competent, experienced personnel into the government to build institutions and operate a modern state, only the GPC will have the skill and experience needed to take on the requirements of governance. What happens to the party with Saleh gone will be a key consideration in the negotiations going forward. While Saleh’s son, Ahmed Ali, will likely seek to assert leadership of the party, there is little evidence that he has his father’s political skill or capability. Thus, new leadership will be needed. Doubtless understanding that, the Houthis are reportedly mounting manhunts throughout Sana’a aimed at capturing or killing Saleh loyalists. This is an ominous sign for Yemen’s future.

Amb. Gerald Feierstein is the Middle East Institute’s director for Gulf affairs and government relations. He retired from the U.S. Foreign Service in May 2016.