Does the New York Times Want America In Iraq for One Hundred Years? 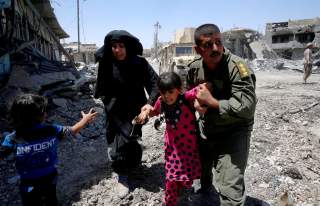 The headline of the New York Times piece was breathless: “Iran Dominates in Iraq After U.S. Handed the Country Over.” The content was only slightly less so: “But after the United States’ abrupt withdrawal of troops in 2011, American constancy is still in question here—a broad failure of American foreign policy, with responsibility shared across three administrations.”

The statement is curious. “What about U.S. history of involvement there tells you it’s going to end well?” asks Hussein Banai of Indiana University Bloomington. Arango’s reporting, which advocates for “American constancy” in Iraq, “contributes to this mythmaking on all sides that all Iraq might need is a U.S. stablizing force,” says Banai. “And it’s just ridiculous.” (Iran’s foreign minister, the veteran diplomat Javad Zarif, also complained about this piece in comments to the National Interest on Monday).

The evidence suggests the 2011 withdrawal was anything but “abrupt.” Barack Obama, an original opponent of the war and supporter of withdrawal, won the 2008 election on an anti-war wave. Leading figures in U.S. life had been calling for withdrawal since the war took a turn for the worse shortly after the fall of Baghdad in 2003. But most importantly, the exodus of U.S. forces in 2011 had been negotiated in 2008 by President Bush; not abrupt. And “it had been working it ways through the Iraqi parliament for some time” before that, Banai notes.

The importance of the American withdrawal, in terms of that event spurring a major upshoot in Iranian influence, is likely overstated. “Iran’s influence in Iraq is... ascendant,” Arango writes. But hasn’t it been for some time?

Trita Parsi, president of the National Iranian American Council, tells me: “Iranian influence in Iraq started much sooner,” than 2011. “The United States had essentially lost Iraq the minute it invaded Iraq but had no plan for the day after . . . The idea that Iraq somehow fell in Iran’s after 2011 is simply wrong. Just listen to the very same critics who before 2011 were arguing that Iran has too much influence in Iraq.” Banai adds: “The major message of that piece is what? That since U.S. withdrawal, Iran has effectively taken over Iraq’s national sovereignty.” Iran was a player in Iraq from the beginning last decade—“there is just nothing to empirically support” that Iran has largely taken over because of U.S. withdrawal. The pair worry about the implications of such thinking.

Indeed, at one point in the piece, Arango uncritically quotes a former aide to the “the Iraqi politician” Ahmad Chalabi, who died in 2015--without mentioning that Chalabi had significant ties to neoconservatives and provided tranches of fabricated evidence to sell the 2003 war. Then there is Arango’s portrayal of an Iraq dominated by Iran in the political and economic realm. Most concede the stentorian military influence Iran has in the country. But Parsi, Banai and others take issue with the characterization of all ties, particularly economic, as inherently insidious. The idea that “a country like Iran would not have influence in its neighboring country, Iraq, is preposterous,” Parsi says, adding that “part of the problem of the article is it depicts American intentions in the best possible light,” versus “Iranians are selling detergent and food to Iraqis because of their desire to subjugate Iraqis.” The New York Times does point out that Iraq’s Shia rank-and-file “also hold close their other identities as Iraqis and Arabs,” putting limits on the Islamic Republic’s ability to strictly appeal to heaven.

One takeaway from Arango’s piece could be a hard lesson: the United States should never go looking for trouble in the Middle East ever again. But one could read it the other way: Iran is ascendant because the United States got out too early (or at all), and is now well on its way to establishing a “Shia crescent” from Afghanistan to Morocco, in direct challenge to our allies; Tehran must be confronted and toppled. The consequences of following such dialectical thinking have, of course, been laid bare by recent history. But the New York Times, for one, does not appear to have wholly absorbed them.