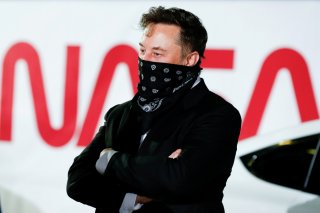 The war in Ukraine has been good for Elon Musk, allowing him to grab headlines and commercial opportunities. Online followers delighted in his waggish posts (including a mano-a-mano challenge to Vladimir Putin) even as Musk earnestly advanced his business agenda. Amid the torrent of Elon-tinged ink spilled since the Russian invasion—his $44 billion pending Twitter acquisition, his ongoing battle with the Securities and Exchange Commission, a new service order by NASA, and more successful satellite launches—the following merit a shout-out:

First, Russia suspended joint space missions with the United States—creating momentum for Musk’s own Lunar and Mars initiatives. Second, the Russian Space Corporation (a Musk competitor for satellite launches) was sidelined by sanctions, allowing him to pick up new customers. Third, Musk’s space-based broadband operation was lauded for gallantly donating satellite receivers to Ukraine. Fourth, unmentioned was the vexing fact that U.S. taxpayers subsidized the “gift” to the tune of $3 million dollars, shipping included.

Such commercial and public relations mastery has allowed Musk to restore space travel to the public imagination. But the business bravura obscures the dark side of Musk’s space-based entrepreneurialism. As he opportunistically elbows out competitors, Musk’s satellite launch and operating business has been systematically crowding out the Earth’s orbit.

It has become commonplace to observe that space is dangerously congested, and that Musk’s SpaceX is the principal culprit—as even his main customer NASA now acknowledges. In addition to plenty of errant space junk, there are more than 7,000 satellites, both active and inactive, currently in orbit around the earth. And as many as 100,000 new satellites could be operational by 2030—more than ten times the number that have been launched since Sputnik first entered orbit in 1957. The overwhelming number of these will be low-earth orbit satellites (LEOs)—networks of hundreds, or thousands, of small, rapidly moving spacecraft that cost less to manufacture and launch than traditional high-orbit geostationary satellites (GEOs). LEOs’ closer proximity to the Earth also has the advantage of providing more bandwidth and reducing latency. One source expects 170 different LEO constellations to be operated by as many private companies by the end of the decade.

Of the four main LEOs players, the most ambitious is Starlink, a division of Musk’s SpaceX, whose satellites account for a quarter of all LEOs. Starlink has plans for tens of thousands more satellites—as many as 42,000 total.

LEOs are a bold private sector undertaking and Starlink is the boldest. The research and development around them is driving innovation and wealth creation: last year witnessed a record level of start-up investment and M&A activity in the satellite sector. Satellite broadband constellations alone are valued at $235 billion. Perhaps the greatest hype around LEOs is their claim to revolutionize global connectivity and bridge the “digital divide”—the gulf between those with broadband access and the 3.7 billion without it.

The business opportunity around that vaunted prospect is as compelling as its promise to transform society: SpaceX estimates the global Internet access market to be $1 trillion per year. Previous satellite broadband initiatives sought to crack that market, including Google’s Loon (air balloons providing a 4G LTE network) and Facebook’s drone-based Ascenta project. However, both proved functionally and economically untenable.

And yet in physical geographies with remote, dispersed populations where there is no business case for fiber deployment, satellite delivery remains the only option for Internet connectivity. During previous GEOs business cycles, satellite operators made similar promises of solving broadband inequality. However, burdened with heavy upfront capital expenditures for the design, manufacture, and launch of the satellites, those operators chose to prioritize the predictable demand for services from telcos, broadcasters, and governments over a fickle consumer market. Since then, operators claim, advances in technology and greater capital availability have enabled a new business model. This time, they say, it’s different.

But simply because this infrastructure will exist doesn’t mean that these services will provide a viable solution to global inequality of broadband access. LEOs require consumer equipment that is relatively complex and expensive to manufacture: their sophisticated “smart” terminals must follow the signal hand-off among the many satellites in the constellation. Even heavily subsidized consumer equipment has an upfront cost of $500+ and a monthly subscription cost of $100+. At that price, these services will be well out of reach for most cyber have-nots in the developing world. The product/market mismatch is stark.

It’s not merely that SpaceX, Blue Origin, et. al. have oversold the prospect of consumer broadband from low-earth orbit. And it’s not simply the technological solutionism—an inflexibly engineered fix for a complex social problem—that rankles. The LEOs operators themselves recognize the failed math of the consumer business model. Their proposed solution to the digital divide is a bid by well-funded entrepreneurs to move fast and break things before the regulators can even sharpen their pencils. It’s the corporatization of space wrapped in democratic talking points.

Non-commercial participants in the satellite industry take the critique further still. According to one, SpaceX is seeking nothing less than “Musk sovereignty in space.” The director of the European Space Agency points out that one person owns half of all active satellites and is de facto making the rules: “The rest of the world is just not responding quick enough.” But that’s not wholly accurate. In fact, the world’s governments are actively assisting SpaceX in its dash to stake its claim in space and crowd out competitors.

The U.S. government and NASA, most notably, fully embrace SpaceX’s vision of commercialized low-earth orbit. Their subsidies and patronage to date have included: $106 million in federal loans, guarantees, and bailout assistance; a $653 million five-year contract with the U.S. Air Force for National Security Space launch services; a $2.89 billion contract with NASA to take astronauts from lunar orbit to the moon; and, most controversially, $886m allocated last year through Build Back Better’s Rural Digital Opportunity Fund meant to bring high-speed Internet service to homes and businesses in rural areas of the United States. The latter was particularly controversial: SpaceX, which pledged to provide services to 600,000 under-served locations in thirty-five states, was the fourth-highest recipient of those funds. Upon discovering that some of the money would be used to provide enhanced connectivity to existing private sector facilities such as parking lots and airports, the Federal Communications Commission (FCC) challenged the award.

All of the foregoing have helped build a $125 billion valuation for SpaceX in its last funding round. However, in its relationship with the company the U.S. government is effectively an investor and financial sponsor without the benefits of equity ownership. It’s the opposite of a typical public-private partnership (PPP) where private sector funding is made available in the service of large-scale government infrastructure projects. Here the government bears both the financial and operational downside risk of traditional PPPs. One could call it a reverse PPP: the conflation of legitimate public purpose with private, for-profit activity—rent-seeking at the expense of taxpayers. When viewed through this lens, SpaceX resembles a modern-day version of Elizabethan-era privateering or outsourced extra-territorial conquest as practiced by the East India Company.

Developments in Ukraine have reminded us of the strategic stakes of space. Shortly after the invasion, SpaceX competitor Viasat’s satellite network was hacked by Russia, disrupting Ukrainian and other European civilian and military communications. Russian military failures during the conflict have also highlighted the price paid by Russia for the corruption that has undermined its once prestigious defense and space programs. By contrast, Musk’s virtuoso business initiatives have revolutionized the cost structure of space and created clear strategic competitive advantages. That’s why the industry and public cheer him on in spite of Musk’s moral ambiguity. But we mustn’t let the odd fascination with billionaire space tourism and the manufactured drama of Netflix SpaceX documentaries cloud our judgment.

As satellite costs decline and demand for connectivity rises, talking points around the digital divide will proliferate as a pretext for commercializing space. Perhaps someday, with transformative changes to LEOs operators’ business plans, they may even become more than just PR. However, in the near term, the unregulated crowding of low-earth orbit will aggravate threats ranging from collisions to signal interference to climate concerns to security vulnerabilities, diminished night sky visibility, and potential conflict among nations. The only path to averting an orbital tragedy of the commons is through a more muscular regime of global governance and international rules for space.

Space safety and equity are addressed primarily through the United Nations’ dedicated committees and offices. However, historically UN member states have often simply ignored decisions by these bodies, even in the face of obvious adverse consequences: last year’s Russian anti-satellite rocket mission (which created dangerous orbital debris that will persist for decades) is a stunning case in point. While non-state players such as SpaceX are obliged to arrange frequency usage and orbital altitudes through the United Nations International Telecommunications Union, much of the real decisionmaking over private-sector satellite projects takes place at the national level—for example, through the FCC and in the courts, where national interests and business advocacy prevail over broader concerns for optimal global use of space resources. The FCC has given tacit support to the view that, as a private entity, SpaceX isn’t bound by existing protocols such as the UN’s Outer Space Treaty, effectively relegating outcomes to the market.