Don’t Believe What the Defenders of Myanmar’s Junta Say 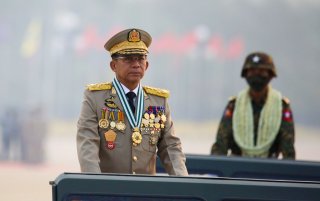 As the Burmese junta has faced growing pressure from the international community, pro-military voices have sought to polish the irretrievably tarnished image of the Burmese military. Recently, they have become more active in disseminating narratives favorable to the military, called the Sit-tat by the Burmese people, to international audiences. Some shared these narratives in the media. Some brought them up to policymakers. Some distributed them in discussion rooms. Despite the use of different platforms, their narratives invariably echo arguments put forth by the military junta since the first day of the coup.

In their narratives, the Sit-tat is perennially portrayed as “the essential national force” and “the force of stability.” They state that only the military can preserve territorial integrity and ensure national unity and stability. Their narratives defend the military coup as constitutionally justified by the repeated failures of the government under the National League for Democracy (NLD) party to resolve electoral irregularities alleged by the Sit-tat. Some even go further, claiming that the Sit-tat remains committed to the democratic transition mandated by the 2008 constitution, and state that it will hold new elections during the promised time frame. These voices promote the notion that it is impossible to exclude the Sit-tat from the political space in Burma as it is the only force capable of restoring democracy to the country. At the same time, they also discredit the National Unity Government (NUG) and the People Defense Forces (PDF) as “terrorist organizations” perpetrating acts of violence and undermining the stability of the country.

Some of the shrewder pro-military voices position arguments around trending issues such as “the geopolitical significance of Burma in the Indo-Pacific strategy” and “the unsuccessful United States intervention in Afghanistan.” The key aim of these narratives is to convince the international community, especially the West and democratic countries, to re-engage with the Sit-tat based on the argument that they will lose leverage over the generals as Burma enters the embrace of China.

Yusuke Watanabe’s December 11 article in the National Interest is a classic example of these types of narratives. Yusuke is the son of Hideo Watanabe, an eighty-seven-year-old Japanese former politician who reportedly has close relations with the Sit-tat. Hideo is a founder and Yusuke is secretary general of the Japan-Myanmar Association, a private group that campaigns to bring Japanese investments to Burma. Reuters recently reported that Hideo “is also pursuing a $42 million shopping mall investment in a tie-up with a firm linked to a sanctioned army conglomerate.” The Watanabes also have a long track record of working closely with the Sit-tat, and have become outspoken advocates of the junta after the coup. They have constantly pushed the international community to re-engage with the junta. Yusuke’s recent article is their latest attempt to advocate for the junta.

Yusuke’s article, titled “On Myanmar, Japan Alone Must Hold the Line,” amplifies the crudely contrived and unconvincing narratives of the Sit-tat, deliberately mingling falsehood with distorted facts. First, it attempts to interpret the coup as a “constitutional transition of power” to the military, which Yusuke claimed is a “constitutionally-recognized fail-safe mechanism supporting the country’s lingering aspirations to democracy.” However, the military’s seizure of power, as Professor Andrew Harding rightly remarked, “is very clearly unconstitutional, even by the terms of the 2008 constitution.” At the time of the military takeover, there was no sufficient reason, according to the 2008 constitution, to declare a state of emergency. The country did not then have “an emergency which may disintegrate national solidarity or loss of sovereignty,” and there were no “acts or attempts to take over the sovereignty of the Union by insurgency, violence and wrongful forcible means.”

In fact, what the Sit-tat itself had done was a seizure of power by “insurgency, violence and wrongful forcible means.” The disintegration of national solidarity and loss of sovereignty have become possible scenarios only as a result of the coup and the military’s indiscriminate violence. Moreover, the 2008 constitution stipulates that the power to declare the state of emergency rests only with the president, and the arrest of the president and high-ranking civilian officials on the day of the takeover, therefore, means it was an outright coup and not a constitutional transfer of power. The designation of the Sit-tat’s seizure of power as a “military coup” has become a well-established fact contrary to the military’s repeated rejections.

Later, Yusuke echoes the Sit-tat’s narratives that it still retains its constitutional commitment to democratization under the Five-Point Road Map it laid down after the coup. However, the weight of historical and contemporary evidence instead indicates that Myanmar’s Sit-tat has little regard for any political arrangements, such as democracy and federalism, but only power for itself. It is, in the words of David Matheson, “an army of darkness” that has been obsessed with power and its prerogatives, and it remains prepared to employ atrocious violence against its own people to maintain that power. In the most recent coup, the military jettisoned the very constitution that it wrote to entrench its own prerogatives at the first sign of any diminishment of its power. Ridiculously, Yusuke eulogizes “the Sit-tat,” that ruthlessly killed off the nascent democracy of the country, as “the last line of defense for the democratic future” of Burma.

Another selling point of the military apologists is that the Sit-tat is the essential national institution, and the exclusion of the Sit-tat from the political realm would result in disaster. The modern history of Burma proves otherwise. Former U.S. ambassador to Burma Scot Marciel claims that this pro-military narrative ignores the Sit-tat’s own record of fostering conflict and division and mismanaging and subordinating the country’s interest to its own obsession with power over more than fifty years.

These are the same forces that committed brutal crimes against the Rohingya minority that a UN fact-finding mission labeled a “genocide.” Thus, “a force of chaos”, as Andrew Nachemson labeled it, fits perfectly as a descriptor of the Sit-tat. Past interventions of the Sit-tat in Burmese politics did not resolve but only aggravated political crises. Based on these experiences, Marciel warned that “Myanmar is likely to continue to suffer from conflict and instability for as long as” the Sit-tat “remains in power and continues to operate in its current form.” Therefore, it is time to give up that futile narrative to find a genuine solution to the longstanding political crises of Burma.

Yusuke again echoed the official narrative of the Sit-tat when he described the anti-coup resistance movement and the NUG/PDF as “so-called peaceful demonstrations” that “immediately turned violent” and resorting to terrorism. In reality, the entire world has witnessed how the junta’s security forces have ruthlessly and lethally “terrorized the peaceful protestors with weapons of war“ since the coup. The Sit-tat has no compunctions about ramming a car into peaceful protestors or burning villagers alive. These horrifying examples of extreme violence occurred prior to the recent escalation in armed conflict, not in response. A BBC investigation found that the Sit-tat carried out a series of mass killings on civilians in July, about two months before the declaration of defensive war by the NUG, in Kani township in Sagaing region.

One could argue that it was the military’s violence that triggered the renewed civil war by driving the people to the conclusion that they have no other options but to defend themselves. However, even under the intensified oppression of the junta, the people have not renounced non-violent resistance. Non-violent flash-protests continue on an almost daily basis, and nearly the whole country actively joined in the recent “silent strike” against the military junta. Yusuke’s article neglected to mention ongoing non-violent protests, as well as the atrocities and indiscriminate killings committed by the Sit-tat. He even attempted to defend the military’s actions as a “response to the growing threats of domestic terrorism and insurgency.” In so doing, Yusuke attempts to distort the reality of the post-coup violence and legitimize the Sit-tat’s atrocities for international audiences.

A litany of distorted analysis seeps through every sentence of his article. For example, he incorrectly claims that “NUG consists of numerous elements from the decades-long communist insurgency led by the Communist Party of Burma (CPB).” The CPB in fact disintegrated during a 1989 internal mutiny, and its few exiled members have not been significant in Burmese politics since then. It is also well-known that the NUG is composed of ousted parliamentary members, ethnic political representatives, protest leaders, and civil society activists, not former insurgents from the CPB. This argument only serves to delegitimize the NUG and seemingly link it to China.

Moving beyond Burma’s internal situation, Yusuke also targets international actors. For instance, he claims that “Western disregard for Myanmar’s constitution is a flagrant infringement of the spirit of sovereignty.” In fact, it is the Sit-tat that has disregarded and disrespected Myanmar’s constitution it drafted. Just before the coup, Commander-in-Chief of the military General Min Aung Hlaing publicly said that ”the constitutional must be repealed if the law is not abided by.”