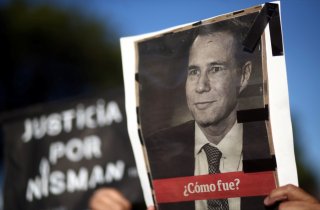 Alberto Nisman was found dead in his Buenos Aires apartment on Sunday, January 18, 2015. The cover-up of his murder started immediately, with evidence seeping out like water from a leaky faucet that won’t stop dripping even after multiple attempts to plug it.

Nisman had spent a decade as the head prosecutor investigating the deadliest bombing in Argentina’s history. Eighty-five people were killed and hundreds more wounded on the morning of July 18, 1994, when, according to Nisman’s findings from his exhaustive investigation, Iranian officials at the highest levels of government had planned the bombing which its proxy Hezbollah carried out. A van carrying 606 pounds of ammonium nitrate plowed into the five-story AMIA Jewish community center building. The souls of the victims’ families are still scarred.

Nisman had filed a complaint with Federal Judge Ariel Lijo’s court on Wednesday, January 14, 2015. He alleged that then-President Cristina Fernandez de Kirchner had made an agreement with Iran to absolve the Islamic Republic of responsibility in the AMIA terrorist attack and to lift the INTERPOL red notices on the Iranian officials Nisman had implicated. In exchange, Iran would sell oil to Argentina and Tehran would receive grain, and possibly weapons, according to the complaint filed with Lijo. A Memorandum of Understanding, or MOU, was signed between the two countries, a document that is now public.

Kirchner’s allies scrambled to learn what else Nisman had on her.

Days after his death, Kirchner disbanded the SIDE, the top intelligence agency, knowing some agents had cooperated with Nisman. She created a new spy agency, Agencia Federal de Inteligencia, led by her cronies.

After long delays, Prosecutor Eduardo Taiano pursued the complaint Nisman had filed with Lijo. On March 5, 2018, Kirchner and a dozen of her associates were indicted in federal court for obstructing the investigation into Iran’s role in the bombing.

Within hours after he was found dead, Kirchner immediately—and falsely—announced Nisman had committed suicide. Soon after, she posited other false conspiracy theories. None have stuck. The evidence was not there.

Diego Lagomarsino, Nisman’s technology consultant indicted as an accessory to the murder, claimed the prosecutor had asked him to bring him a gun. It was Lagomarsino’s .22-caliber Bersa gun that killed Nisman. Police investigations found no residue from Lagomarsiono’s gun on Nisman’s hands.

The investigation into his death was so bungled that one can only surmise the sloppiness was intentional. Then-Vice Minister of Security Sergio Berni tracked through the apartment with his muddy shoes. Viviana Fein, the prosecutor in charge of the investigation, stepped in pools of Nisman’s blood. Evidence that ought to have been preserved was not taken into custody until months or even years—after Nisman’s death.

Nisman had bodyguards protecting him in his Puerto Madero residence. On that Sunday, for twelve hours, he was suspiciously left unprotected. Many of the cameras in his usually secure building were inoperable that day.

Nisman’s complaint was one of a dozen judicial cases against Kirchner.

Kirchner sought to defend herself against Nisman’s allegations. She insisted on taking actions that had no basis in Argentina’s justice system, demanding to address the court and to have her court statement publicly broadcast. Neither of these demands was permissible under Argentine law because the trial had not yet begun. And yet the panel of judges acquiesced.

In an hour-long speech, Kirchner argued that she had committed no crime and that therefore the trial should not proceed, and the case should be dismissed. In his earlier reports, Nisman had agreed that Kirchner’s conduct of foreign relations was part of her executive duties, but maintained that under the constitution, her executive authorities could not intrude into the judiciary’s authority. That is, in carrying out her foreign relations work she was not allowed to absolve Iranian citizens that Argentina’s judiciary had implicated in the killing of eighty-five Argentine citizens. That, he said, was the crime she had committed.

To the shock of victims’ families, last October the three-judge panel dismissed the case before the trial of by now Vice President Kirchner had even started, before the evidence was presented, and before 300 witnesses were to speak—witnesses who were not afforded the opportunity to address the court and the nation. The miscarriage of justice continued. As she did with corruption cases against her before other courts, she successfully unwound this case. Victims’ families appealed the case before a higher court where a decision is pending.

Also in October 2021, major evidence of an alleged attempt to obstruct an investigation into Nisman’s death emerged. The respected Clarin journalist Hector Gambini uncovered what had happened in the Casa Rosada—the presidential offices—the day before Nisman was found dead. At 4:15 pm, a fire broke out in the room holding the electronic data tracking all those entering the presidential offices. The data was destroyed. The fire took place during the same afternoon that technology consultant Lagomarsino would later claim he was bringing Nisman the gun he claimed Nisman had requested.

Anibal Fernandez, then Kirchner’s chief-of-cabinet (now minister of security), denied there had been a fire in the Casa Rosada. He later acknowledged a fire but claimed it had occurred on February 21. When time-stamped photographs were published showing the fire had taken place on January 17—the evening before Nisman was found dead, not thirty-five days after—he asserted it was inconsequential. Was it?

As many as 130,000 records of those who entered the presidential offices from 2011 to 2015 were destroyed in the fire. It’s the same period during which Nisman found, according to wiretaps he had obtained, that negotiations about the MOU with Iran were taking place.

Was it inconsequential that the fire destroying critical data took place just three days after Nisman had filed his complaint against Kirchner?

Was it inconsequential that Casa Rosada staff were directed to record the fire as accidental so that it would not trigger a judicial investigation?

Was it inconsequential that Kirchner’s top aide Fernandez assured the public there was a backup of the data when in fact he had ordered the technicians not to back up the data, according to evidence published by Clarin?

Was it inconsequential that the electrical overload only destroyed the visitor access records but not any other digital files in the Casa Rosada?

Was it inconsequential that while several firefighters suffered injuries from smoke inhalation, it was recorded as just a “fire alarm”?

Why did the summary of the incident indicate that “no journalists were nearby?” Was it to keep secret a possible conspiracy to destroy evidence?

Who was seeking to bury evidence and for what purpose?

Those who successfully plotted to kill Nisman didn’t want to just bury his body. They wanted to bury the body of evidence he had collected while investigating the bombing of the AMIA, and, perhaps, the data that might have corroborated the incriminating evidence he had accumulated from some 30,000 legally obtained wire taps he said implicated Kirschner and her associates for seeking to whitewash Iran’s role in the bombing.

Today, AMIA-related INTERPOL red notices for current and former Iranian officials, including Mohsen Rezaei, and a Lebanese national remain in effect. Last week, the world witnessed Nicaragua hosting Mohsen Rezaee for whom Argentina also has an arrest warrant in connection with the AMIA bombing. He is also on Argentina’s terrorism list and is sanctioned by the United States.

Argentina issued a bland statement criticizing Nicaragua but did not fulfill its own obligation in a timely manner to seek his arrest and extradition so he could stand before an Argentine court of law to face justice. Argentina’s justice system is failing both the victims of the AMIA bombing and the Argentine public. Those with the legal duty to seek the truth have done just the opposite. They are seeking to bury Alberto Nisman and his investigation once again.

Those who care about justice, about holding Iran accountable and denying Hezbollah the means to carry out its malign activities, will seek to designate Hezbollah the terrorist outfit that it is. They will ensure that Iran’s entities and proxies perpetrating its terrorist activities abroad will be sanctioned and denied the legitimacy that they seek. Those who care will not let Argentina—or the world—rebury Alberto Nisman and his incriminating, meticulously assembled incriminating investigation.

Toby Dershowitz is senior vice president for government relations and strategy at the Foundation for Defense of Democracies, a nonpartisan research institute focusing on national security and foreign policy. Follow her on Twitter @TobyDersh.