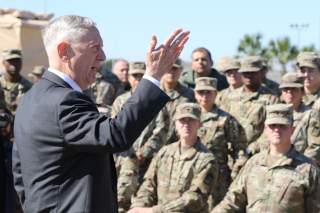 The publication of Gen. James Mattis’s new book, Call Sign Chaos: Learning to Lead, which he co-authored with Bing West, has been met with much attention and fanfare. Concurrent with the book release, the former secretary of defense has given a number of television and radio interviews. Most of the early responses have been positive, although a few people expressed disappointment that Mattis was reluctant to criticize Donald Trump the same way he critiqued his other former bosses, Barack Obama and George W. Bush. There’s much to admire, though, such as his impressive accomplishments, his call for the study of military history, and his refreshing views on leadership.

Indeed, it’s hard to argue with a leader as noble and successful as Mattis, particularly as he stands in contrast to the excesses and social-media tweets of the current president. He is one of the country’s most courageous battlefield commanders and effective public servants. Nevertheless, admiring Mattis’s career and personality does not require one to accept all of his ideas about American foreign policy.

In particular, we need not buy his views on grand strategy, which is the theory that a country uses to define and pursue its goals abroad. The Mattis perspective of how best to protect the national interests is based upon the now familiar, and tired, strategy of primacy: that the U.S. should, with its unrivaled military might, continue to police most, if not all of the world’s regions; that it should do this with and, more importantly, because of U.S. allies; and, finally, because the “enemy gets a vote,” the United States can never leave the regions where its troops currently fighting. The last eighteen years have taught Mattis that the problem with U.S. foreign policy is that policymakers don't show enough resolve to pursue primacy. If things aren’t working, then the United States must just try harder—not rethink its goals and methods.

There are at least three reasons to doubt Mattis’s views on grand strategy.

First, he wrongly assumes the lessons of history are self-evident. If we all read enough diplomatic and military history, then we will share Mattis’ conclusions. “If you haven’t read hundreds of books, you are functionally illiterate, and you will be incompetent, because your personal experiences alone aren’t broad enough to sustain you,” Mattis and West proclaim in their new book. One problem with this approach to the past is that it ignores context. Not everything Xenophon wrote about ancient Mesopotamia will apply to modern Iraq. Still further, the implications of historical events only look crystal clear when interpreted by the frameworks and theories we all explicitly, or as is more often the case, implicitly hold in our heads. Mattis reads history as a proponent of primacy, that the United States can and should sustain its place as the world’s preeminent power and global policeman.

Second, even though he is a student of history, he ignores the historical evidence suggesting that his preferred grand strategy, primacy, is unsustainable. Mattis notes, “We have a million troops around the world who are trying to defend this experiment called America.” A student of history would remind Mattis that for preeminent national powers, nothing lasts forever. Great powers rise, and then they inevitably fall, especially when military spending becomes a drain and adversaries discover new avenues of competition. We only have to remember a few of history’s greatest hits, which ultimately flopped: Hapsburg Spain, Louis XIV’s France, Imperial Germany, Pax Britannica and the Soviet Union. By the way, these last two countries spun their wheels in Afghanistan, too. Oh, and because Mattis likes to mine antiquity for gems, don’t forget Rome. The historical challenge is not showing the will to sustain primacy, but rather to anticipate changes in the balance of power to avoid painful declines. It’s not hard to imagine the glee in Beijing and Moscow as the United States squanders its relative power in the Middle East.

Third, in Mattis’s view of grand strategy, the United States should never change course. Nowhere is this more apparent than in Afghanistan. “The example of South Korea is instructive,” Mattis argues. “Since the cease-fire in 1953, we have kept tens of thousands of U.S. soldiers there. Our large troop presence and steady diplomacy safeguarded the transformation of that war-torn country from a dictatorship into a vibrant democracy. But it took forty years.” According to Mattis, “In Afghanistan,” he countered, “we were unwilling to devote the resources and time needed to transform the country, decade by decade, into a thriving democracy.” If South Korea is the model for Afghanistan, then it begs an important question, especially for a society like ours, which is more like Athens than Sparta: When do we get to leave dangerous places, or is the plan to garrison the planet? The best available research suggests military occupations are far more costly and difficult than Mattis envisions. Moreover, if we want to avoid the fate of history’s other over-extended preeminent powers, then the United States needs to start making some choices about where to spend its limited blood and treasure.

Mattis, is right, however, to demand more from policymakers. If civilians are going to exercise prudent control over the military, then they need to begin by crafting realistic grand strategies. We should aim for strategies where means and ends align. To his credit, Mattis wants more resources for more ambitious ends. The defense budget isn’t too big; it’s not big enough! There’s a rationale here, but it’s not clear we can afford it. And, unfortunately, many proponents of primacy, irrespective of their love for quantitative metrics, never tell us how big the defense budget should be.

An alternative grand strategy would envision civilian leaders pursuing more restrained ends, preserving resources for use at home and for greater challenges down the road. Policymakers would do well to start asking when it is feasible and prudent to pass the torch to allies when it makes sense to do less, and more fundamentally, what places in the world are really worth fighting and dying for when the United States clearly has limited resources. Since the end of the Cold War, the United States has pursued a grand strategy with few constraints. The last twenty-eight years have demonstrated the limits of U.S. military power, especially in the Middle East. With the rise of China, and facing fiscal constraints, American policymakers have some hard choices to make when it comes to the U.S. role in the world.

This is the real lesson about strategic leadership, but it cannot be found in Mattis’s book. And no one should expect Mattis to provide all the answers. We already demand much from our armed forces, including asking them to provide a model for our politics, or as Mattis put it to “hold the line until our country gets back to understanding and respecting each other and showing it.” A democracy should not expect its military leaders to both fight our wars and at the same time decide which ones are worth fighting. As instruments of national interests, we should not demand that they define the national interests. This task rests with civilian policymakers, who over the last few decades have avoided the hard choices. A coherent grand strategy, matching ends with means, is the least we owe our armed forces, which already shoulder the burden of recent military campaigns of dubious strategic value.

Jasen J. Castillo is an associate professor at Texas A&M University’s George H.W. Bush School of Government and Public Service, where he also serves as the Academic Director of the Albritton Center for Grand Strategy.  His research focuses on U.S. national security policy.  His publications include: Endurance and War: The National Sources of Military Cohesion and Passing the Torch: Criteria for Implementing a Grand Strategy of Offshore Balancing in New Voices in Grand Strategy.