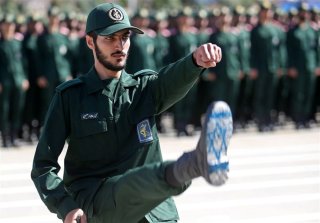 The debate over whether to delist Iran’s Islamic Revolutionary Guard Corps (IRGC) as a foreign terrorist organization (FTO) has evolved. President Joe Biden appears to have ruled out an unconditional delisting of the IRGC in whole. The deliberations now are over whether Washington and Tehran will be prepared for a middle ground solution, that involves retaining the IRGC’s extraterritorial arm, the Quds Force, while removing the rest of the IRGC’s units from the FTO list in exchange for undefined concessions. But this kind of arrangement would invent an artificial distinction in the IRGC that does not exist.

The IRGC is more than just the Quds Force. The Quds Force is one of its smallest units with only 5,000 active officers, according to a U.S. Defense Intelligence Agency (DIA) estimate, although some reports put it higher. It also does not account for the members of Iran’s broader Axis of Resistance, which is its proxy and partner network. But the number of pure Quds Force officers still pales in comparison to the IRGC’s Ground Force which stands at around 150,000 forces, the IRGC’s Navy with 20,000 personnel, the IRGC’s Aerospace Force with 15,000 members, and the Basij reserves with 450,000 strong. Thus, while the Quds Force receives outsized attention from the West given its sponsorship of terrorism, it is only a cog in the wheel of the guardsmen.

Supreme Leader Ayatollah Ali Khamenei, as the commander-in-chief of Iran’s armed forces, appoints the IRGC’s top brass, including the Quds Force. Usually, these appointment announcements cite how Khamenei has approved a proposal from the IRGC’s Commander-in-Chief Hossein Salami for these posts, even some at the deputy level. For example, when Quds Force commander Esmail Ghaani’s deputy, Mohammad Reza Fallahzadeh, assumed his position, Iranian media highlighted how it was Salami’s recommendation which Khamenei accepted that led to his elevation. This shows how involved the IRGC’s senior command, namely Salami, is in staffing the Quds Force leadership structure.

When Qassem Soleimani was head of the Quds Force, DIA noted that his “close relationship with Khamenei allow[ed] him to often directly advise and receive orders outside the traditional chain of command.” This was indicative of Soleimani’s special personal relationship with the supreme leader, and it is likely Ghaani has direct access to Khamenei as well. Nevertheless, it is not Ghaani who is a standing member of the Supreme National Security Council (SNSC) which drives security decisionmaking inside the confines of the supreme leader’s guidelines. Instead, Salami holds that seat for the IRGC in its entirety. In fact, in addition to Ghaani, the IRGC’s commander-in-chief maintains communication with members of Iran’s Axis of Resistance who are designated as FTOs themselves. For example, Salami spoke by phone with the Secretary-General of Palestinian Islamic Jihad Ziyad al-Nakhalah during Operation Guardian of the Walls last year. He also met separately with Nakhalah and Hamas’ Ismail Haniyeh on the sidelines of Ebrahim Raisi’s inauguration as president. The Quds Force should thus not be seen as a separate branch deserving of unique treatment from the rest of the IRGC hierarchy.

In terms of resourcing the Quds Force, the IRGC’s parent organization provides material support to its extraterritorial arm. When the U.S. government designated the IRGC as a Specially Designated Global Terrorist (SDGT) in 2017, it did so for activities in support of the Quds Force. Most importantly, the U.S. Treasury Department revealed that the IRGC itself provides “training, personnel, and military equipment” to the Quds Force. It trained Quds Force personnel ahead of deployments to Syria and employed “at least hundreds” from the IRGC’s Ground Forces to assist in these operations, particularly through “critical combat support, including serving as snipers and machine gunners.” That is not to mention that the IRGC, and its Basij subunit, “recruited, trained, and facilitated the travel of Afghan and Pakistani nationals to Syria” to supplement Quds Force officers.

Likewise, officials from the IRGC Aerospace Force’s Al-Ghadir Missile Command, which is charged with overseeing Iran’s deployed missile force, have been intimately involved in Quds Force campaigns, particularly in Yemen in the transferring of technical expertise to the Houthis. The U.S. Treasury Department in 2018 sanctioned the commander of the Al-Ghadir Missile Command, Mahmoud Bagheri Kazemabad, who at the time oversaw “the transfer of missile components and the deployment of ballistic missile specialists across the region.” These ballistic missiles have been fired at U.S. partners Saudi Arabia and the United Arab Emirates, endangering Emiratis, Saudis, and Americans who live in these countries.

This is critical as it shows the Quds Force is not just some special terrorist unit walled off from the IRGC’s other missions. Rather, it is at the beating heart of IRGC resourcing, despite its smaller size, and other IRGC components, like the Aerospace Force, supplement its efforts. Attempts to segregate the Quds Force from its IRGC parent organization, therefore, do not survive close scrutiny.

Delisting the IRGC as an FTO while retaining its Quds Force in its hall of infamy recalls the approach of some European governments—namely France and the European Union—which create fictitious distinctions between Hezbollah’s military and political wings in sanctions architecture. But this very approach is rejected by Hezbollah’s leadership itself. There are some who also argue that most of the IRGC’s forces are merely those fulfilling compulsory military service. However, the existence of conscripts does not negate the IRGC’s broader resourcing of terrorism across all its satellites.

In the end, Tehran has been employing the same playbook for over a year—dragging out the negotiations with world powers to advance its nuclear program while shortening and weakening the existing Joint Comprehensive Plan of Action (JCPOA), and in the process attempting to notch a stronger agreement for itself through non-nuclear demands like the delisting of the IRGC as an FTO. Instead of inventing “creative” solutions to appease Tehran’s extorters, it’s time for policymakers in the United States and Europe to accept the IRGC for what it is—a foreign terrorist organization in its entirety.

Jason M. Brodsky is the policy director of United Against Nuclear Iran (UANI). He is on Twitter @JasonMBrodsky.