Don’t Use the Ukraine Crisis to Inflate the China Threat 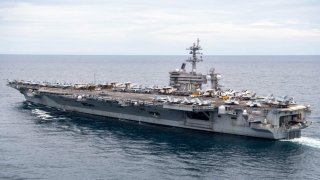 In a February 13, 2022, essay that was published in the Wall Street Journal entitled “Ukraine Is a Distraction From Taiwan,” Elbridge Colby and Oriana Skylar Mastro argue that the United States will increase the danger of prompting an opportunistic Chinese attack on Taiwan if it deploys military forces to deal with Russia’s threat to Ukraine.

To support this argument, the authors assert that “…China poses an increasingly imminent [emphasis added] threat to Taiwan,” and, given its huge military power, “…reasonably doubt[s] that the U.S or anyone else would mount a meaningful response to an invasion of Taiwan.” In addition, the authors assert that any additional U.S. ground troop deployments to Europe will weaken the U.S. capacity to defend Taiwan, and hence will indeed tempt China to attack.

To make this perceived threat even direr, the authors argue that Taiwan must be kept from China because it is “a vital link in the first island chain in the Western Pacific” the loss of which will make it harder for the U.S. “…to defend critical allies like Japan and the Philippines...,” and allow China to “project its naval, air, and other forces close to the U.S. and its territories….”

The authors present these assertions as if they are truisms, rather than shaky speculations derived from worst-case assumptions or untested theories about Chinese and American intentions and capabilities. The U.S. policy framework for managing its interests with regard to Taiwan has never treated the island as a strategic asset against mainland China. Nor are U.S. defense commitments to its Asian allies dependent on the use of Taiwan for this purpose. There is a low probability that Beijing doubts the likelihood of U.S. involvement in some fashion in response to a mainland invasion of the island, given the language of the Taiwan Relations Act, and the many recent Congressional bills expressing the sense of Congress on the matter.

The U.S. “One China policy” has always rested on the conviction that the future of Taiwan, whether independent from or unified with Mainland China, must be determined peacefully in a manner consistent with the freely expressed wishes of the people on both sides of the Taiwan Strait. For the United States to treat Taiwan as a strategic asset would take that peaceful resolution out of the hands of the peoples directly involved, thus undermining the logic of the U.S. One China policy that has helped preserve the peace across the Taiwan Strait for decades.

Increased Chinese saber-rattling and verbal warnings toward both Taiwan and the United States are certainly raising alarm bells, reflecting Beijing’s unwavering assertions, over many decades, that it will use force to prevent the permanent separation of Taiwan from mainland China. They clearly reflect Beijing’s concern that Washington is only paying lip service to its One China policy and is in fact moving toward a One China, One Taiwan policy that would foreclose the possibility of unification as a potential outcome of a peaceful resolution.

Beijing attaches much greater significance than does Washington to Taiwan president Tsai Ing-wen’s refusal to acknowledge any aspect of a One China framework. It is also disturbed by Washington’s gradual dismantling of the political and diplomatic limits it had previously placed on relations with Taipei. These factors, taken together with Chinese president Xi Jinping’s recent reaffirmation that China will continue to strive for peaceful unification, suggest that Beijing’s recent threatening behavior towards Taiwan is designed to strengthen deterrence against permanent separation of Taiwan from the mainland rather than a harbinger of an imminent intention to use force to achieve unification.

Nevertheless, Beijing’s efforts at military intimidation must be taken seriously. Prospects for peacefully resolving the cross-strait relationship do not exist at present, and Mainland Chinese efforts in recent decades to increase support in Taiwan for peaceful unification have failed miserably. At the same time, support in Taiwan for maintaining the status quo remains strong.

Given these circumstances, it is disturbing that Xi has on several occasions displayed impatience over the lack of progress on unification. The reality is that Mainland Chinese impatience to achieve unification within a wholly unrealistic time frame can be as disruptive a factor in East Asia as would be further erosion of Washington’s One China policy. There would be no winners from a conflict over Taiwan, which would involve two major nuclear powers. To pretend otherwise would be to court disaster. If East Asian countries do not wish it, China can no more dominate the region than Russia can dominate Europe if the Europeans choose otherwise.

In contrast to what the authors contend, our impression, derived from decades of experience interacting with Chinese military and civilian scholars and officials, is that Beijing assumes the United States has the capacity and the will to meaningfully intervene in a conflict over Taiwan. This is supported by simulations and research indicating that Beijing has not concluded that it can successfully seize and hold Taiwan if the United States intervenes militarily. Media claims that simulations show a consistent pattern of Chinese victories in a Taiwan conflict are misleading, according to some participants.

Given the realities of modern warfare, especially at the nuclear level, China’s leaders are unlikely to assume the huge risks involved in a conflict over Taiwan unless deliberately provoked by persistent and willful ignoring of Beijing’s warnings and redlines regarding the permanent separation of Taiwan from Mainland China. Any Chinese government that displayed weakness in the face of such a challenge would risk a destabilizing domestic backlash that would likely threaten the nationalist legitimacy of the People’s Republic of China regime as the defender of Chinese sovereignty and territorial integrity. Beijing’s determination on this score was made clear in its passage in 2005 of an Anti-Secession Act, its domestic equivalent of the U.S. Taiwan Relations Act.

In their other writings, Colby and Mastro, along with others in the Washington policy community, seem to assume that only a coalition of East Asian nations along the first island chain, acting in lockstep with the United States, can save the region from Chinese ambitions to dominate Asia and threaten American interests. If China is allowed to have any undue influence over Taiwan, their argument apparently goes, then nearby Asian states will waver, China will then move to subjugate them, the dominoes will fall, and all will be lost.

East Asian countries do indeed want a robust U.S. economic and security presence in the region to balance Beijing’s growing influence. However, they all have major economic and trade ties with China and are resistant to joining a zero-sum anti-China coalition that would put their economic interests in opposition to their security concerns. They also value their trade and investment links with Taiwan but do not regard it as the strategic key to Asian stability.

Colby and Mastro’s contention that the deployment of several thousand U.S troops to Ukraine will deplete U.S. capabilities in Asia, thereby encouraging Beijing to attack Taiwan, ignores the fact that any U.S. deployments in Europe would be primarily ground forces, whereas Taiwan is located in a primarily air and naval theater. Some overlap does exist between the U.S. capabilities needed in the two contingencies, as the authors contend, but it is not enormous.

Moreover, the Biden administration has made it abundantly clear that it is not going to war with Russia over Ukraine, which limits the scale of possible future supplementary European deployments. In contrast, Washington is constrained by the language of the Taiwan Relations Act from making a comparable pledge of non-involvement regarding Taiwan and is obligated under the Taiwan Relations Act to maintain the capacity to resist any resort to force or other forms of coercion against Taiwan.

Given the above, it is doubtful that Beijing is poised to invade Taiwan or that it would assume that the deployment of sizable U.S. ground forces to Europe provided an opportunity to strike the island. The Ukraine and Taiwan situations are in most respects apples and oranges, involving different interests, obligations, and stakes for the United States. The only lesson that the Ukraine situation poses for the United States regarding Taiwan is that brushing aside firmly stated redlines by powerful countries worsens the available options.

In the case of Taiwan, U.S. obligations to the island are not a function of its strategic importance but of the U.S. commitment, in establishing diplomatic relations with Beijing, to promoting a peaceful resolution acceptable to both sides of the Taiwan Strait. The framework established in 1979 served this purpose and permitted Taiwan to democratize and prosper, assisted in no small measure by the development of vibrant cross-strait trade, investment, and transportation links. No friend of Taiwan can endorse policies that make conflict more likely.

The best U.S. policy approach would be to make every effort to restore a stable status quo across the Taiwan Strait, one that can be sustained for an indefinite period. This would require Washington to maintain the integrity of its One China policy, all parties to avoid provocative actions and words, and confidence-building measures to reduce the likelihood of conflict.