Is Don McGahn the Biggest Threat to the White House? 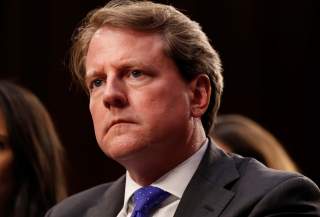 The Mueller Report detailed multiple instances where obstruction of justice could have occurred but declined to reach a final conclusion. The Department of Justice, under Attorney General William Barr and Deputy Attorney General Rod Rosenstein, have declined to pursue the allegation as a criminal matter. But there is a salient instance, however, that is garnering increasing attention as a possible route to impeachment.

Enter White House Counsel Don McGahn. As TNI has previously reported, McGahn was the official responsible for overseeing the large influx of conservative judicial appointments under Trump, including managing the confirmation of Supreme Court justices Neil Gorsuch and Brett Kavanaugh. McGahn departed the administration in October 2018. The Mueller Report confirms an earlier New York Times story that in June 2017 Trump repeatedly asked McGahn to have Robert Mueller fired as the special counsel.

According to McGahn, the president was incensed at a Washington Post article that stated he was being personally investigated. Trump then called McGahn twice, both times requesting that he contact Rosenstein and have Mueller removed for “conflict of interest” reasons. “You gotta do this. You gotta call Rod,” McGahn claims the president told him. In the second phone call, the president was more direct. “Call Rod, tell Rod that Mueller has conflicts and can’t be the Special Counsel,” McGahn recalls the president saying, along with “Mueller has to go” and “Call me back when you do it.” Rather than be the Robert Bork stand-in in a Saturday Night Massacre scenario, McGahn decided to resign, going so far as to go to his office and collect his personal items. McGahn was convinced to stay on by Chief of Staff Reince Priebus and Chief Strategist Steve Bannon, having never informed the president he was about to resign. McGahn instead decided not to follow Trump’s directive, and in their following interactions, Trump never inquired whether McGahn had called Rosenstein.

When The New York Times reported the story, Trump requested that McGahn release a public statement denying the account. McGahn refused, saying the core of the story was accurate. In a tense face-to-face meeting days later, Trump denied that he had ever asked for Mueller to be fired. “I never said to fire Mueller. I never said ‘fire.’ This story doesn’t look good. You need to correct this. You’re the White House counsel,” Trump told McGahn. While McGahn agreed that the president never used the word “fire,” he stuck to his version of events and did not issue a press release. Since the Mueller Report’s release, Trump has continued to claim that he never ordered McGahn to have Mueller removed, while McGahn has defended the report’s description.

“The president right now is trying to discredit Don McGahn. But Don McGahn testified under oath, and the president says whatever he needs for the moment. Mueller has found McGahn to be a credible witness, a truthful witness who testified for 30 hours,” said Fred Wertheimer, President of Democracy 21 and longtime advocate for government accountability. “President Trump obviously is deeply concerned about this, because he’s taking the classic approach he took during his business career of trying to litigate, delay, obfuscate. But I don’t think he can discredit Don McGahn anymore than Richard Nixon was able to discredit John Dean.” McGahn’s testimony is cited 157 times in the report, more than any other witness.

“The Mueller report finds that using a criminal standard that they could neither make a case beyond a reasonable doubt nor exonerate Trump. They were bound by Justice Department regulations just as Barr was. Mueller’s findings are limited by the fact that he could never bring a case anyway,” observed Wertheimer.

Former Reagan administration Justice Department official Bruce Fein agrees with Wertheimer that there’s an important distinction between a criminal prosecution and a political process such as impeachment. “The relevant question now is the evidence, even if you couldn’t prove it beyond a reasonable doubt under customary prosecutorial standards, is it something that rises to the level of an impeachable offense?” asked Fein.

Fein concludes that there is not sufficient action by the Trump administration to warrant obstruction of justice. “Number one, the facts are nobody interfered with anything Mueller did. He made all tactical and strategic decisions. No one told him to do otherwise. He wasn’t penalized. He wasn’t clipped in money. The president didn’t invoke Executive Privilege and didn’t try in any other way to control the investigation. It was Mueller who decided he didn’t need or want to depose Mr. Trump because he thought he had enough evidence otherwise to identify the likely state of mind he had,” Fein told TNI.

Furthermore, Fein believes that comparing the obstruction of justice allegation against Trump to previous ones against Nixon and Clinton is incorrect on the merits. As Fein points out, Nixon directed witnesses to lie such as his Chief of Staff H. R. Haldeman, and Clinton coached his personal secretary Betty Currie to lie as well. Trump never told anyone to lie to the Special Counsel, and he always worked through intermediaries. Fein concludes that “the directness of the obstruction and the magnitude was different.”

Several legal experts, including Fox News’ Andrew Napolitano, believe that Trump requesting McGahn to have Rosenstein fire Mueller does indeed constitute an obstruction of justice. Napolitano, a former New Jersey judge and longtime acquaintance of the president, wrote in an op-ed that “the obstructer need not succeed in order to be charged with obstruction. That's because the statute itself prohibits attempting to impede or interfere with any government proceeding for a corrupt or self-serving purpose.” Despite the Justice Department’s abstention from further investigating the obstruction issue, Napolitano reminds readers that “the nearly universal view of law enforcement…is that the obstruction statute prohibits all attempted self-serving interference with government investigations or proceedings.”

“We’re not talking about charging someone with a crime and giving him a chance to rebut evidence. We’re talking about overturning an election,” counters Fein. “It’s true as a pure issue of law that you don’t have to succeed. But the difference between saying McGahn should have him [Mueller] fired, which he never was, McGahn prepared a resignation letter. Not only that, Trump didn’t fire McGahn either, McGahn left on his own. Trump didn’t do anything to actually retaliate or suggest that he was so bent on this that he was going to find someone else. Unlike Nixon, who went Richardson, no, Ruckelshaus, no, and finally got Bork.”

Kevin Gutzman, a constitutional scholar and historian, agrees with Fein’s latter point, that Trump’s “omission to follow up on his demand could itself be considered exculpatory.”

“I also don't think the president could have been obstructing justice by firing whomever he wanted to fire from within the Executive Branch, because according to Article II, Section 1 of the Constitution, the executive power of the Federal Government is vested in the president of the United States. Those other guys are his subordinates; he can fire them if he wants, for any reason or no reason,” Gutzman told TNI.

The House Judiciary Committee under Chairman Jerold Nadler (D-NY) has issued a subpoena for Don McGahn to testify before them next month, along with all of his related documents. Wertheimer believes that shifting the investigation from the Special Counsel to Congress is appropriate. “I think the House Democrats and Democratic leadership is on the right path. This is the same path that occurred during Nixon’s Watergate scandals. The Senate Watergate Committee conducted investigations for a year before the House Judiciary Committee ever opened impeachment inquiries. Part of what is necessary here, and was necessary then, is letting the American people see what the facts are and what happened,” he told TNI.

Gutzman agrees that this course of action is appropriate. “I think Congress generally has the right to demand whatever information it wants. In general, I accept the late Harvard legal historian Raoul Berger's argument that executive privilege is a myth—that presidents don't have a right to deny Congress information.”

“The danger for Democrats is that loose talk about impeachment will lead to an avalanche the party can't control. Enough pressure from the left and the party's base could force the presidential candidates to campaign on it, which in turn would put Nancy Pelosi in an awkward position if she didn't try to make it happen,” theorized Dan McCarthy, editor of Modern Age. “But then the entire 2020 campaign, not just for president but House and Senate too, would be about impeachment. It's high risk, because the winnable part of the public might become more irritated with impeachment than with Trump himself. The party mandarins don't think they need impeachment to make gains next year, including the White House, but the mandarins might not be the ones who get to call the shots.”

Agreeing with both Fein’s and Gutzman’s legal analysis that Trump’s unfulfilled request does not rise to an appropriate level of obstruction, editor of The American Conservative James Antle believes the end product of impeachment does not threaten the White House. “My sense…is that just as Senate Democrats decided the matters about which Bill Clinton perjured himself and was said to engage in witness tampering or obstruction of justice were not important enough for them to remove him from office, the absence of a collusion finding would cause Senate Republican to reach a similar conclusion about Trump. So, Democrats would have to decide whether a partisan impeachment vote in the House is helpful to them in 2020,” Antle told TNI.