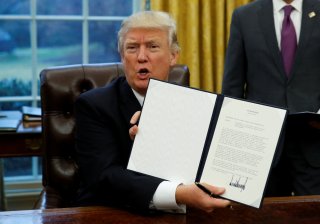 If the Indo-Pacific is a top U.S foreign policy priority, the structuring of a rules-based commercial order stands glaringly as a missing piece in the Trump administration’s Free and Open Indo-Pacific strategy toward the region. As Singapore’s Ambassador Bilahari Kausikan has observed “In East Asia, trade is strategy.”

The missing piece in the U.S. strategy is a story of Washington’s retreat and Tokyo’s advance as the champion of the Comprehensive and Progressive Agreement for Trans-Pacific Partnership, TPP 11. It is also the story now of RCEP, the Regional Comprehensive Economic Partnership. Almost two years after TPP 11 came into effect, Beijing, with the conclusion of RCEP, a fifteen-country free trade agreement (FTA), is able to stake a claim to economic leadership as a champion of globalization and multilateral cooperation.

The missing piece story begins in Australia. President Barack Obama, in his November 17, 2011 address to the Parliament of Australia, set out the economic rationale for his Rebalance to Asia—casting America’s economic future in Asia as “the world’s fastest growing region…creating jobs and opportunity for the American people.” The Obama administration positioned the Trans-Pacific Partnership (TPP) as the economic pillar of the United States' strategic engagement with the region. Secretary of State Hillary Clinton initially advanced TPP as the “gold standard in trade agreements to open free, transparent, fair trade – the kind of environment that has the rule of law and a level playing field.”

Despite the strong support from the U.S. Chamber of Commerce and the American business community, TPP fell victim to domestic politics, disavowed in 2016 by Democratic presidential candidate Hillary Clinton and attacked by Republican candidate Donald Trump. On January 23, 2017, President Trump withdrew the United States from TPP. His subsequent trade policy focused on bilateral trade deals—in Asia, an FTA with Korea, a Market Access agreement with Japan, and a Phase One trade agreement with China.

In withdrawing from TPP, however, President Trump compromised an American vision of a rules-based order. Trump’s decision took the United States outside the rules setting norms of the TPP, at a time when the economic dynamism of the region, despite the U.S.-China trade war and the disruptions caused by the coronavirus, continues to move toward integration,

In the vacuum created by President Trump’s decision, the Abe government reassembled the TPP pieces and through dedicated diplomacy successfully brought it into being, on December 30, 2018, as the Comprehensive and Progressive Agreement for Trans-Pacific Partnership. The agreement established a free trade zone of eleven countries—Japan, Malaysia, Singapore, Vietnam, Brunei, Australia, New Zealand, Chile, Peru, Mexico, and Canada—a market with a population of approximately 500 million people, with an estimated annual GDP of $10 trillion.

At the same time, given the uncertainties arising from the administration’s trade war approach to commerce, alliance partners in the Indo-Pacific have moved to consider other trade structures. On November 15 at the ASEAN Summit in Hanoi, the member states of ASEAN plus China, Japan the Republic of Korea, Australia, and New Zealand reached an agreement on Regional Comprehensive Economic Partnership (RCEP) free trade agreement. RCEP countries make up 30 percent of the world’s gross domestic product and account for 30 percent of the world’s population. After eight years of difficult negotiations, in the end, for Japan as well as other members of the TPP 11, the draw of expanded access to China’s market proved irresistible.

Commenting on RCEP, Alexander Capri, professor at the Singapore National University Business School, said the agreement “solidifies China’s broader regional geopolitical ambitions around the Belt and Road Initiative.” Gareth Leather, Senior Asia Economist for Capital Economics at Asian Economics, wrote that RCEP has allowed Beijing to stand as a “champion of globalization and multilateral cooperation.” China’s Premier Li Keqiang cast the agreement as a “landmark agreement of East Asian regional cooperation” and a “victory of multilateralism and free trade.”

Meanwhile, China, Japan, and the Republic of Korea continue discussions toward a trilateral free trade agreement. And the Japan-EU FTA went into effect on February 1, 2019.

Today, Asia’s hedging against the downside risks of the Trump administration’s trade-war approach to commerce may have long-term, and yet now unforeseen, political and strategic consequences for the United States.

Managing America’s substantial economic ties to the region will be a major challenge for the administration that takes office on January 20, 2021. Notwithstanding the withdrawal from TPP, U.S. economic engagement in the Indo-Pacific is significant. In 2017, the United States stood as the “largest source of foreign direct investment” in the region with a two-way trade with the region totaling $1.8 trillion. These are substantial stakes in a region that is fast moving forward to structure a rules-based trading order—without U.S. participation.