Is Donald Trump About to Launch an Operation in Southern Syria? 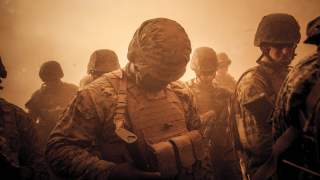 As coalition forces inch closer toward the Islamic State stronghold of Raqqa, increased U.S. military activity on Jordan’s northern border suggests that the fight against ISIS will soon expand to southern Syria.

On April 6, President Trump authorized the launch of sixty cruise missiles from warships off the coast of Syria.

On April 8, a Free Syrian Army political officer reported that U.S. forces were reportedly mobilizing to the Jordanian border with a contingent of Jordanian soldiers.

On April 9, Al-Hayat, a regional news outlet, confirmed previous reports, via a political source in Amman, that a joint U.S.-British-Jordanian military contingent was waiting in northern Jordan for the green light to enter southern Syria. The aim of the offensive is to combat the Khalid Ibn al-Walid Brigade, an Islamic State affiliate operating in the Golan Heights.

On April 10, U.S. coalition forces and vetted Syrian opposition forces at the Tanf joint base, ten miles north of the Jordanian border, repelled an attack by ISIS militants, destroying numerous assault vehicles, a vehicle-borne improvised explosive device, and a number of fighters with coalition air support.

On April 11, Al-Jazeera Jordan reported that the United States and coalition forces are preparing to launch offensives from Jordan into southern Syria, more specifically, in the eastern Syrian desert and in Daraa, where the Syrian uprisings began in 2011.

On April 14, Sergey Lavrov, Russia’s foreign minister, announced that Moscow would continue monitoring this buildup of coalition forces and equipment on the southern border.

Despite the Trump administration’s vocal objection to the Assad regime recently, it has largely stuck to its guns—literally—in its commitment to fight ISIS. The United States, which has long prioritized support for the Syrian Democratic Forces, has now expanded its support to “vetted” members of the Syrian opposition in the south. This change in tactics introduces new potential consequences.

American support for select members of the Syrian opposition in the south could embolden the entirety of the southern front and fuel tensions between them and pro-Assad forces presently occupying significant portions of Daraa. U.S. military engagement in the south could result in conflict (direct or indirect) with Assad’s forces. And an invasion into southern Syria would likely escalate political and diplomatic tensions with Russia, detracting from both the Astana peace talks and the UN-backed Geneva peace talks. But none of these consequences can begin to compare to the potential civilian toll.

A coalition operation in southern Syria would have national-security implications for Jordan, which sees Assad and his affiliates’ (Iran and Hezbollah) presence in the south as a direct threat. Strategic interests and national-security priorities are the chief concern for America’s regional allies. Israel and Jordan do not benefit from the Syrian regime’s presence in the south. Israel has a strategic interest in ensuring that Hezbollah and the Islamic Revolutionary Guards Corps (IRGC) do not gain any foothold near its borders. The IRGC is operating only 70 km away from Jordan’s northern border, creating unease for both states. King Abdullah II admitted in an interview with the Washington Post that the IRGC’s presence will not be tolerated close to Jordan’s border.

While a coalition operation would aim to unseat ISIS in the south, it would send a clear message to pro-Assad forces that the United States and its allies are committed to preventing both ISIS and Iran from gaining a regional foothold. It is hard to envision the Jordanians engaging in open conflict with the regime or with IRGC forces, particularly given their relatively moderate stance toward Assad in the past several months. Jordan opted for diplomatic interventions to prevent the expansion of Iranian influence in the south. Israel, on the other hand, has proven that they are more than willing to utilize surgical strikes against the IRGC, Hezbollah and regime forces when their actions directly threaten Israel’s security. Perhaps, the coalition operation is the launch of a best-of-both-worlds scenario for Israel and Jordan—the beginnings of a buffer zone.

Building “safe zones” has long been debated. But, because of the risks, most policymakers have stepped back. The Trump administration began seriously considering safe zones as a policy option within a month of entering office. Since then, the idea has gained more traction, principally among Israel and Jordan. In February, President Trump met with King Abdullah to discuss building and enforcing a safe zone. The Israeli newspaper Haaretz reported last week that Prime Minister Benjamin Netanyahu is now lobbying for the creation of a buffer zone inside Syria. Yes, there are an amalgam of complexities that must be overcome, but the concept seems to have taken root among America’s regional allies. The larger question remains, is this the goal of an anti-ISIS operation in southern Syria? If so, is the Trump administration willing to put American soldiers on the ground to make such a zone a reality?

The Trump administration has left many uncertain about America’s next step in Syria, or if there will even be a next step. Senior officials have echoed several open-ended comments about the option of further action against Assad. If Trump approves a military operation in southern Syria, it will be imperative that it does not bring U.S. soldiers into open conflict with the regime. That would be hard to avoid.

Jesse Marks is a Herbert Scoville Jr. Peace Fellow based in Washington, D.C.