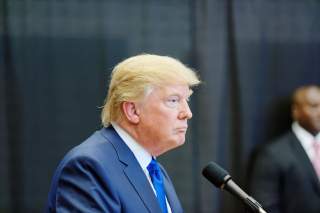 In the Republican presidential race, while Donald Trump’s star has faded a little, he continues to lead nationally in most polls. To be sure, he is not going to be president. Trump is more of a circus barker than a plausible commander-in-chief. But his continued polling success should indicate something about his appeal that observers from both parties would best understand. And partly, believe it or not, this has to do with U.S. foreign policy.

Trump has staked out a combination of foreign policy positions that leave him with a distinct niche, however unwelcome to elite opinion. He opposes free trade agreements like the Trans-Pacific Partnership, and favors draconian punishments for illegal immigrants. He says it’s time to get tough with China and Japan on trade—and “beat Mexico,” while we’re at it. He supports a strong U.S. military, including increased defense spending. He claims to have opposed the 2003 invasion of Iraq. He declares that America has little to show for its years of intervention within the Middle East, and suggests that if Vladimir Putin wants to engage more deeply in Syria, he’s welcome to it. In fact Trump says he could get along very well with the Russian leader. At the same time, Trump favors a much more aggressive U.S.-backed campaign against the Islamic State.

Obviously Trump is neither a liberal internationalist nor a conservative one. His critics call him an isolationist, but that’s not quite right either. Genuine isolationists on both left and right, however wrong-headed, tend to be more high-minded, principled and pristine than The Donald. Trump’s real niche, carved out in his own strange way, is simply American nationalism. And this is a powerful force among Republicans.

As I describe in my book The Obama Doctrine, the Republican Party is today divided between three main foreign policy impulses. The first is conservative internationalism, the belief that the United States should be active and engaged overseas, militarily, economically and diplomatically. The second is conservative or libertarian isolationism, favoring strict avoidance of foreign wars, reductions in defense spending and cuts in U.S. bases and alliances overseas. The third impulse is conservative nationalism—and this is where Trump has found his not inconsiderable niche.

Conservative nationalists in the Obama era are deeply skeptical regarding the benefits of U.S. foreign aid, nation-building and multilateral humanitarian interventions. At the same time, GOP nationalists continue to favor bolstered armed forces and an unyielding stance toward America’s adversaries overseas. They oppose diplomatic concessions to hostile dictatorships and favor robust counterterrorism. Internationally, they favor sticks, not carrots.

Historically, conservative nationalists used to vote Democrat. Based in the Southern, Western and Greater Appalachian white working class, these anti-establishment voters were drawn to FDR’s economic populism, even as they backed muscular foreign policies under his Democratic successors, from Truman to LBJ. The left turn taken by the Democrats on cultural, fiscal and national security issues by the 1970s alienated this constituency and encouraged them to become Reagan Democrats. Now, after seven years of Barack Obama, they are simply Republican—and while often derided as a shrinking demographic nationwide, in fact, within the GOP they’re as important as ever.

After 9/11, conservative nationalists were entirely on board for the war on terror announced by President George W. Bush, and they remained staunch supporters of his to the end. In the Obama era, however, they became far more skeptical of the benefits of well-intended pro-democracy interventions within the Middle East. When convinced of a real security threat, as with ISIS, conservative nationalists are still as ready to fight as anyone. They believe that reputation matters, and that weakness invites aggression. In a word, they are hawks. But where the case for intervention seems abstract or convoluted, they have become considerably more cautious.

Conservative nationalists matter in 2016, especially in the coming GOP primaries, because they form something like a plurality among Republican voters today. The numerical weight of strict non-interventionists at the grassroots level is often overestimated by outsiders, and has certainly been reduced over the last year or so as international threats appear to gather. Conservative internationalists, for their part, have historically taken the lead in Republican foreign policy, and their numbers by comparison are often underestimated. But it is the third group, conservative nationalists, that form the median within the GOP today on the issue of foreign policy, and they will certainly help to determine the next Republican nominee. So it might be worth at least listening to what conservative nationalists have to say, even though they are sometimes mistaken, because they can smell elite disrespect from a mile away—and will punish it.

Which brings us back to The Donald. To say that Trump is a flawed representative of the conservative nationalist persuasion would be a gross understatement. For one thing, there is nothing in his background to suggest he’s even a genuine conservative, or that he has any principled commitment to limited government as a governing philosophy. Where most candidates try to offer at least some semblance of a program, The Donald simply offers… himself. Just put him in charge, he winks, and all your problems will be solved. This is not any kind of true conservatism. It’s Tom Sawyer, trying to get the other kids to paint the fence while paying him for the privilege.

Trump’s foreign policy statements are a similar collection of trickeries, as soon as you get into any detail. If you watch him during TV debates or interviews, it soon becomes obvious that much of the time he literally does not know what he’s talking about. His idea of foreign policy preparation is apparently to read through press clippings regarding himself. He blurts out applause lines with enough force to cheer his supporters, and taps into deep resentments with considerable showmanship. But when asked to go beyond the most superficial one-liners, he becomes hostile, defensive, contradictory and confused. It’s the political equivalent of Tourette syndrome: instead of serious conversation from The Donald, we get explosive tics.

Even if Trump offered intelligent, well-informed ideas on foreign policy issues from his chosen position, the conservative nationalist impulse would still not be adequate in itself. Strict nationalists tend, for example, to underestimate the value of America’s unparalleled alliance system. The great need today isn’t to “beat” core allies such as Mexico and Japan, while working with Vladimir Putin. On the contrary, the urgent need is to constrain aggressors such as Putin, while supporting core U.S. allies like Mexico and Japan. Nationalists also tend to underestimate the utility of U.S. foreign policy carrots such as foreign aid and trade agreements. If the United States is going to engage overseas, as it sometimes must, then it really will need to utilize non-military foreign policy instruments more effectively than Obama has done. Trump offers no plausible proposals on any of these matters. His protectionist, anti-immigrant stance, combined with his own sheer ignorance on the issues, takes a flawed foreign policy strain and makes it even worse.

Historically, the GOP’s nationalist impulse has been most effective and beneficial when integrated into a broader Republican coalition under conservative leadership that is fundamentally constructive, forward-looking and prepared to actually govern this country. The obvious example is Ronald Reagan. Today however, the party’s nationalist strain has turned in a sour, cramped and defeatist direction, describing the United States of America—in Trump’s exact words—as a “hellhole.” Trump compares himself to Ronald Reagan, but it is impossible to imagine Reagan talking or thinking in this way.

It should go without saying that if nominated, which is very unlikely, the obnoxious, unwelcoming, and adolescent posture struck by Trump would be defeated by Hillary Clinton next fall, and badly. The ultimate loser would then be conservatives, since Clinton would be empowered to implement another four years of liberal policies following on Obama’s.

Having said all this, Trump isn’t wrong about absolutely everything, and neither are his supporters.

For one thing, he seems to be having a good time. Policy wonks tend to miss the attraction of this. Voters don’t want a candidate who views their support as a tiresome obligation.

More importantly, by whatever route, Trump has bluntly expressed a few key truths about American foreign policy today, and his supporters know it. When Trump says that the U.S. doesn’t seem to win wars anymore, that we need to rebuild our military, that we’re not defeating ISIS, that the Iran nuclear deal is a disaster and that America is less respected by its adversaries under President Obama, he’s not wrong. Nor is he wrong to point out the painfully half-baked nature of so many U.S. interventions during recent years. These views are all shared by conservative nationalists, and they’re an accurate description of international realities in the Obama era.

The GOP’s conservative nationalists may be wrong to undervalue foreign policy carrots, but they’re right to say we need sticks. Any serious national security policy will utilize and integrate the two better than Obama has done.

The Republican candidate that can best recognize, incorporate and articulate what’s right about conservative nationalism, while leaving behind what’s currently wrong with it, will not only win the Republican nomination: they will deserve to win it.