Donald Trump and the Art of the Faustian Deal 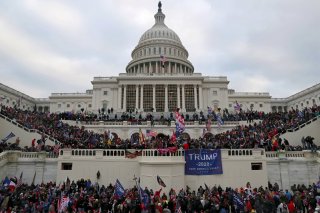 Trump, the classicists at Claremont are well aware, is the epitome of a populist—anathema to his enemies, but for his sane supporters, no more than a vehicle. Regimes so different as that bequeathed by the Founders and the one polluted by administrative rulemaking and woke culture run amok are so mutually exclusive that a regime-political candidate was necessary, even at the risk further constitutionally perilous tribalization. No human-shaped bridge exists from one to the other—least of all an orange-haired, Manhattan tycoon-shaped one—so hoping for a normal-political candidate to redeem America would liken Claremont to a messiah-expecting monkish sect. Trump’s rhetorical accent on the people’s consent for government made this populist gamble all the more irresistible.

Claremont’s demands in turn that a sledgehammer be taken to the administrative state and the bully pulpit become a platform for the culture war were reasonably satisfied, but the fallout from January 6 has markedly hastened the looming backlash under Biden. The gamble’s element of risk, as has been endlessly rehashed, was Trump himself. And as far as the chances for a better candidate to emerge, Claremont may be looking at the past four years as a net setback for its cause.

Jorge González-Gallarza (@JorgeGGallarza) is the co-host of the Uncommon Decency podcast on European issues (@UnDecencyPod) and an associate researcher at Fundación Civismo.