Donald Trump and the Art of the Perpetual Bluff 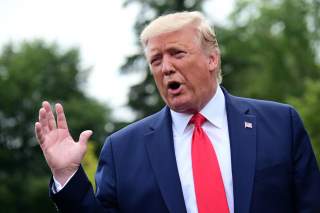 Official and unofficial Washington continue to wonder why President Donald Trump decided to invite not only Afghan President Ashraf Ghani to Camp David, but also the Taliban, and why, having arranged the meeting in secret, he summarily and publicly withdrew the invitation only days afterward. Ostensibly, Trump cancelled the invitation because an American soldier had been killed in yet another Taliban attack only days before the Camp David meeting was to take place. Yet the Taliban had launched brutal attacks primarily against Afghan targets while it negotiated with Ambassador Zalmay Khalilzad and had reached what Khalilzad called an “agreement in principle” but days before Trump issued his secret invitations to the presidential retreat.

It is not hard to explain why Trump invited the Taliban in the first place. He continues to be driven by his quest for the Holy Grail that is Nobel Peace Prize, while at the time seeking to demonstrate that he truly is the master of “the art of the deal.” His face-to-face meetings with Kim Jong-un, accompanied by his blandishment of the North Korean dictator, have thus far come to nothing. He has yet to unveil his much ballyhooed peace agreement between Israel and the Palestinians. His desire to meet with Iranian president Hassan Rouhani has not been reciprocated. His offer to mediate the decades-old dispute between India and Pakistan over Kashmir was roundly rejected by New Delhi. His efforts to browbeat Beijing into a trade agreement have yet to succeed. And all the while he is no doubt irked by the fact that his predecessor in the White House won the Nobel Peace Prize—and did so before he had demonstrated anything other than his extraordinary eloquence.

Moreover, Trump could not bear to see Khalilzad, or anyone else, hailed as the author of a peace agreement with the Taliban. By inviting both Ghani and the Taliban leadership to Camp David, the president would have been able to monopolize the limelight, and indeed one-up his negotiator who never brought Ghani and the Afghan government into the peace talks. Scheduling the meetings for the week of 9/11 would have provided a fitting closure to an eighteen-year war that began on that date.

Why then did Trump cancel the meetings? It is pointless to expect a straight answer from the White House, or from the president. Perhaps John Bolton, his National Security Advisor, successfully convinced him that he could withdraw American troops in stages from Afghanistan without having to reach any deal with the Taliban. Perhaps the president recognized that inviting the murderous Taliban to Camp David would not resonate well with the American public or his base.

Perhaps, too, Trump also realized that an agreement with the Taliban, which involved “undertakings” by the radical group, would not be worth the paper upon which it was written, and that as soon as American forces left the country, the Taliban would attempt to overrun all Afghan areas not already under its control. Were the Taliban to succeed, then Trump would be seen as having been duped, an intolerable situation for a man who proclaims that he cannot abide “losers.”

Trump may, of course, simply be playacting. After all, in February he abruptly walked out of his meeting in Vietnam with Kim Jong-un. He may be doing the same with the Taliban, in order to gain a psychological upper hand. His difficulty is that the Taliban can afford to wait him out, even if he is re-elected in 2020. Moreover, the Taliban leadership knows that Trump desperately wants to withdraw all American troops prior to the 2020 election; the wait need not be that long. With American troops gone, the Taliban could pursue its aim of once again controlling all of Afghanistan, much as Hanoi was able to conquer South Vietnam once American forces departed for home. Therefore, whatever the merits of the agreement Khalilzad nearly put into place, if Trump is determined to withdraw all American forces from Afghanistan, then he will have forfeited the upper hand in any negotiation with the Taliban.

Trump is not known for introspection, yet he may in this instance have recognized his dilemma and decided that it was best to drop the pretense of achieving a formal settlement with the Taliban. In the meantime, until a settlement is reached, or until America withdraws from Afghanistan, more American soldiers are sure to die, if not at the hands of the Taliban, then as a result of attacks by the Haqqani insurgents or the Islamic State, neither of whom have participated in the peace talks. And the war will go on.