Donald Trump Did Not Set Out to Obstruct Justice 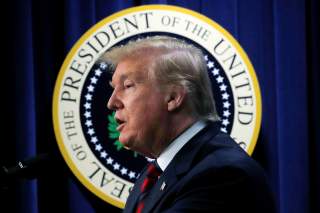 Few Democrats will tell you that the Whitewater investigation into Bill Clinton, which eventually expanded to cover the Monica Lewinsky affair and more, was worth the time and money spent on it. Likewise, few Republicans have an appreciative word to say about the Iran-Contra investigation. This is despite the fact that Bill Clinton really did lie under oath, and elements in the Reagan administration really did sell arms to Nicaraguan Contras in defiance of Congress. Even the existence of demonstrated wrongdoing does not incline partisans on either view these years-long, highly politicized investigations as contributions to the health of the republic.

During the course of his investigation, Robert Mueller found no coordination between the Trump campaign and Russia. Unlike the report Kenneth Starr issued in 1998, the Mueller report does not call for a president’s impeachment and outline grounds for such an action. By those standards—and by the standards of other, similar investigations—the Mueller report is a dud. Yet it has stirred up just as much partisan rancor, with people hostile to President Donald Trump treating the report as explosive and damning. This is an ugly charade.

Trump was cleared of improper dealings with a foreign power. Still, his critics cling to the idea that he might have obstructed justice anyway. Why would he do that? To hide proof of his innocence? Trump did not fire Mueller or suspend the investigation. Ah, but he did talk to White House Counsel Donald McGahn to suggest McGahn have Deputy Attorney General Rod Rosenstein, Mueller’s overseer, or Mueller himself, fired. McGahn didn’t do so, and the president, who could have forced the issue, did not. Presidents often ask their counselors for more than they can give—that’s not a crime. A counselor is expected to know better than the president he serves where to draw the line. Trump is not a lawyer. He’s a businessman who is used to—and famous for—firing subordinates at will.

And as president, Trump has full legal authority to fire subordinates like Rosenstein and Mueller (as well as James Comey, whom he did fire) at will. This would not be obstruction of justice, but an exercise of his constitutional powers, and the notion that exercising constitutional powers could be criminal is patently absurd. The exercise of those powers could incense Congress enough to impeach the president, but that’s a political process, not a simple exercise of law enforcement. Congress has even tacitly endorsed a president’s power to fire a special counsel by permitting the law under which Lawrence Walsh, Kenneth Starr, and other post–Watergate “independent counsels” were appointed to expire in 1999. That law specified that the president could not dismiss an independent counsel appointed according to the law’s provisions. The law would have been redundant if ordinary Justice Department-appointed special counsels, like Mueller, had the same independence.

Trump wanted to get rid of Mueller and Rosenstein to spare himself the distraction and indignity that other presidents suffered through, not to obstruct justice. He knew, as everyone in Washington knows, that such investigations inevitably become protracted, expensive, politically damaging and ultimately pointless ordeals. No one would want to go through what Bill Clinton went through, and he was actually guilty of something. Why then is it to be expected that Trump should subject himself to a “Starr chamber” when constitutionally he is not required to do so and has the power to prevent it? Yet after firing Comey, Trump played along with the ritual indignity, however much he hated it, and may have mused to McGahn about ending it.

The Framers of the Constitution did not imagine that a separate executive branch would investigate and prosecute the official—the president—whom the Constitution actually designates as the chief law-enforcement officer of the country. The constitutional mechanisms for dealing with presidential wrongdoing are 1.) elections and 2.) impeachment. These are not judicial remedies because the ultimate judgment of whether a president has behaved in such a way that he must be removed from office is one that only the people and their elected representatives—by suitable supermajorities in both houses, since the effect of removing a president is to overturn his election—are fit to render. The belief that the decision really should rest with bureaucrats and courts is anti-democratic. Behind gilded words about the rule of law lies a perverse commitment to a less accountable form of government. If you don’t like Trump, then vote him out next year. If you think the country can’t wait, then impeach him—if you can. Don’t pretend that the Mueller report makes a whit of difference either way: the same people who want Trump out now are the ones who believed in the collusion conspiracy from the start. They are simply the president’s partisan enemies, no more and no less.

Trump was unwise to fire Comey when he did: that doing so would only make him look like he had something to hide and give his enemies new leverage was entirely predictable. But that action and his subsequent champing at the bit to be rid of the investigation were expressions of agony and impatience, not Machiavellian plotting. And that should have been clear to observers from the beginning—it certainly should have struck the press as more plausible than a “Manchurian candidate” scenario. Much more skepticism is in order: skepticism not toward Trump, but toward liberal conspiracy theories and wishful thinking. More skepticism ought to be applied—not to just one reviled Republican office holder, but to the entire apparatus of Washington, DC. If the Starr Report was bad—as Democrats and many of their friends in the opinion-mongering classes believe—then the Mueller Report is worse.