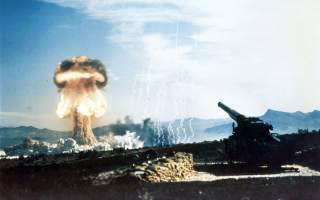 There seems to be little that Americans can agree on. Poll after poll shows bleak prospects for achieving unity in the United States. The vast majority of Democrats and Republicans even report having few friends with differing political views. But there are still some bright spots in this age of polarization. New survey data, which I collected with Jonathon Baron, indicates that Americans of all persuasions strongly support Senate approval of the Comprehensive Nuclear Test Ban Treaty (CTBT). As Washington and its allies stare down an aggressive North Korea, the treaty offers a rare opportunity for a cross-cutting political win for President Trump. By ratifying the test ban, Trump could succeed where his predecessors—most recently, President Obama—all failed.

At first glance, the CTBT may seem like “old news” on Capitol Hill. It has been almost twenty years since 1999, when the Senate voted against test ban ratification by a count of 51–48. Since then, the situation has changed in America’s favor. A 337-facility International Monitoring System is nearly 90 percent complete and successfully detected all six of Pyongyang’s provocative nuclear tests. The United States has also made massive investments in its national verification capabilities and Stockpile Stewardship Program to maintain its arsenal. The latter includes supercomputing simulations and laser physics experiments at the National Ignition Facility, popularly seen in “Star Trek: Into Darkness.”

These investments have paid off. Every year since 1997, the heads of the Department of Energy’s National Laboratories have certified to the sitting president that preserving America’s nuclear deterrent doesn’t require explosive testing. A nonpartisan group of the nation’s top scientific experts also concluded that no country could carry out militarily significant cheating under the CTBT without getting caught. Absent testing, U.S. rivals will face limitations on their ability to develop new types of nuclear weapons. So long as there are nuclear-armed states around the globe, the ban effectively helps the United States to lock in its strategic superiority.

The Trump administration’s new Nuclear Posture Review continues down this path. It reaffirms U.S. support for the International Monitoring System and Vienna-based CTBT Organization Preparatory Commission. Further, it indicates that the U.S. moratorium on nuclear testing since 1992 will continue and encourages all states not to conduct tests. But the Nuclear Posture Review also states that the administration will not pursue test-ban ratification—with little explanation.

Despite this, the CTBT is back in the limelight as President Trump gears up to meet with North Korean leader Kim Jong-un. North Korea is, of course, the only country to have tested nuclear weapons since 1998. Many arms control advocates are thus encouraging treaty ratification as a confidence-building measure between the two sides. Ratification would formalize the U.S. testing moratorium and strengthen the administration’s credibility when dealing with Pyongyang. It would also apply pressure to other key test ban holdouts: China, Egypt, India, Iran, Israel and Pakistan.

President Trump could even use his leverage with Kim to create a joint U.S.-North Korea ratification process. This would improve global security by making permanent Kim’s recent pledge to freeze nuclear tests.

However, one element is clearly missing from any conversation about the CTBT: What do the American people think about it? My survey collaborator and I set out to find the answer to this question in late 2016 by working with YouGov, the international polling and research firm. Our new nationally representative survey of the U.S. population offers the first data in years on how Americans feel about the nuclear test ban. With the U.S.-North Korea standoff intensifying and many changes in international monitoring capabilities, it was important to collect new data. The full results of our study were published last month in the academic journal The Nonproliferation Review.

We found convincing majority support for the CTBT across the United States. Overall, 65 percent of Americans approved of the Senate giving its consent to ratification, with only 15.3 percent opposed (the remaining 19.7 percent of respondents were undecided). As expected, the CTBT had support from a strong majority (69.8 percent) of Democrats. Just 13.8 percent of Democrats opposed the treaty and 16.5 percent were undecided. Tallies from Independents showed 66.3 percent in support, 13.7 percent opposed, and 20 percent undecided. The most surprising data came from Republicans. A majority of Republicans (56.2 percent) supported the CTBT in contrast to a much smaller minority (23.9 percent) in opposition (19.9 percent of Republicans were undecided).

Such remarkable cross-cutting support did not just reach across political party lines—it reached across all societal lines. The data shows majority support for the CTBT among women and men, the rich and poor, the young and the old, the educated and the less educated, and in every geographic region of the country.

In his election night victory speech, President Trump promised, “I will be president for all Americans.” Unfortunately, partisan divides have made it nearly impossible for the president to make everyone happy with his policies. But the CTBT is that rare unicorn. It is an issue that commands support from all segments of American society, including Trump’s supporters and his critics alike. As the president moves toward his talks with the North Korean regime and the 2018 midterm elections, his administration should take a very close look at the nuclear test ban. Putting a permanent stop to both United States and North Korean nuclear testing might just be a task best suited for America’s most unconventional president.

Stephen Herzog is a Ph.D. candidate at Yale University and nonresident WSD-Handa Fellow with the Pacific Forum, Center for Strategic and International Studies. He previously worked on test ban issues for the U.S. Department of Energy’s National Nuclear Security Administration.