Donald Trump Is His Own Worst Enemy 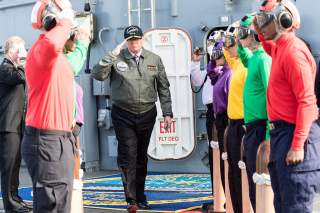 Toward the end of last year’s presidential campaign, Donald Trump tweaked his handlers’ advice as part of his stump speech.

“Stay on point, Donald, stay on point,” he would say. “No sidetracks, Donald, nice and easy.” After all, Trump was a candidate who tended to veer off script, sometimes stepping on his own momentum.

The past week is a reminder that President Trump has the same self-indulgent—and self-destructive—habits Candidate Trump did, but with much higher stakes.

Things were looking up for the president. Trump finally got an Obamacare replacement bill out of the House, which could smooth the path for tax reform and other agenda items. He followed up the confirmation of Supreme Court Justice Neil Gorsuch with several more conservative judicial nominations.

No, it wasn’t the most successful first 100 days. But for all Trump’s faults, he seemed to be building up a head of steam. His administration, now seemingly dominated by the professionals in its midst, was finally finding its footing.

Trump’s abrupt firing of FBI Director James Comey erased any progress he might have made in public perceptions. The president seemed genuinely taken aback that Democrats did not credit him for removing the law enforcement official they were just days ago blaming for Hillary Clinton’s defeat.

“Dems have been complaining for months & months about Dir. Comey,” Trump complained on Twitter. “Now that he has been fired they PRETEND to be aggrieved. Phony hypocrites!”

With that, the Twitter dam burst. Trump said that his Democratic critics, like Sen. Richard Blumenthal of Connecticut, should be investigated instead. He denounced the “fabricated” story of collusion between his presidential campaign and Russian interlopers. He threatened to cancel daily briefings for the “fake” media and suggested he might have “tapes” with which he could retaliated if the deposed Comey kept leaking his side of the story to the press.

All this reinforces everything that makes congressional Republicans uneasy about Trump, to say nothing of the swing voters the party will need in the 2018 midterm elections. It makes the president look petty and vindictive at best, unstable at worst.

Trump’s anger at the Russia storyline is especially inexplicable, given that he singlehandedly revived the issue with his handling of Comey’s dismissal. The Russian investigation had settled into a partisan stalemate that was revealing little new information. Democrats were hectoring relatively minor figures like Carter Page while handwaving about classified information that might conceivably implicate higher-ups, but they could never say they had something solid.

Republicans were instead mainly focused on “unmasking,” intelligence and leaks, to the consternation of the press. Nothing they uncovered rose to the level of the president’s allegations that the Obama administration wiretapped Trump Tower, but they were able to raise questions about incidental collection.

But Trump alluded to the Russia investigation, citing reassurances he had received that he wasn’t a target of it, in the second paragraph of his statement announcing Comey’s firing. He discarded the reasoning in Deputy Attorney General Rod Rosenstein’s carefully argued memo and the messaging of his entire White House communications team to keep saying on Twitter and media interviews that the Russia probe was in some sense a factor in why Comey had to go.

To Democrats, it looked like obstruction. To anyone else, it appeared the president could not tell the difference between independence and insubordination. He believed he was entitled to exoneration and lashed out when he didn’t get it.

By all outward appearances, Trump has difficulty controlling himself and even greater difficulty explaining himself. He keeps key aides in the dark and acts impulsively. Little of this instills confidence in his ability to handle a major crisis. So far, he has mostly faced self-inflicted PR problems.

All throughout the campaign, Trump got himself into these kinds of messes and was pronounced dead. Yet he always somehow managed to live to fight another day—and then win at the end of the day. It would therefore be foolish to count him out not six months into his presidency.

Enough time might have elapsed to reassess the “Never Trump” conservatives’ case. They were wrong when they predicted Trump could not be at least a serviceably conservative president. The jury is still out on their prejudging him on Russia. But their view that his temperament and character flaws would create problems for his presidency has been vindicated, not least by his recent behavior.