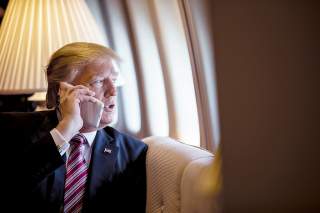 Donald Trump is in trouble, but not nearly as much trouble as the nation’s op-ed pages suggest. He’s not reliving the last days of Richard Nixon’s White House. For all the furore over his firing of the FBI director, there is a crucial difference between Trump’s cashiering of James Comey and Nixon’s “Saturday night massacre”: the Watergate scandal from the start involved a crime, the break-in at the Watergate complex—no doubt or ambiguity about it. Nixon’s “plumbers” were arrested and charged long before the scandal reached the headlines. No one has been arrested or charged with anything in the investigation into the Trump’s campaign’s relationship with Russia. Carter Page has not been arrested. Michael Flynn is a free man. And Donald Trump was well within his rights as president to fire Comey. Before any kind of parallel to Watergate can be drawn, an actual, bona fide crime will have to be found somewhere.

Dismissing Comey when he did was politically unwise, even reckless. But Comey was not personally leading the investigation into Russian meddling in last year’s presidential race. The show will go on without him. If anything, by firing Comey when he did, Trump has guaranteed that the Russia investigation will continue and draw even greater attention than before—the press and congressional Democrats will make absolutely sure of it. They’re more convinced than ever that Trump is acting like a guilty man. Yet one of the explanations that has come out amid the welter of official statements and anonymous leaks is even simpler and fits the president’s psychology perfectly: namely, the idea that Trump fired Comey just because he was angry that Comey wouldn’t make a public statement absolving the president of all suspicion. The wording of Trump’s letter dismissing Comey lends support to this notion: Trump put great emphasis in the second paragraph on Comey’s supposedly having informed him “on three separate occasions” that he was not under investigation. Trump said in the letter what he could not get Comey to say to the nation.

The FBI is still doing its job. Now, however, the politics of the investigation are all the more fraught with peril. Will the bureau feel compelled to criticized Trump, even if it finds—as still seems most likely—that he committed no wrongdoing? Will relatively minor infractions, if Page or Flynn or others committed any, become excuses for throwing the book at them, so the bureau can claim some sort of victory? One hopes not; if no crime is found, or none more serious than technical violations, the whole sorry saga should just be laid to rest. Alas, the partisans who want to embarrass the president will surely press for more, and FBI men have been known to be vindictive—witness the case of Mark “Deep Throat” Felt himself.

The political acrimony lingers even from scandals that never do reach the dramatic denouement of Watergate. The Whitewater investigations into Bill Clinton and his associates instilled an abiding paranoia in them, one result of which was that Hillary Clinton chose to keep her email on her own server when she was secretary of state. Watergate itself, a scandal that still bears comparison to no other, implanted a certain “get even” mentality into a generation of Republicans and led others to close ranks around executive power whenever it’s held by the GOP. In more ways than one, Watergate gave us Dick Cheney.

Lasting bitterness in domestic politics may be the least of the damage that comes of the present panic about Russia, however. More serious is the grave damage this premature (at best) hype is doing to U.S.-Russia relations, at a time when the United States urgently needs a firm but engaging approach to Moscow. Both countries are more or less directly at war in Syria—not with one another, thankfully, but accidents do happen. An incident between the United States and Russia like the one between Turkey and Russia in 2015, in which Turkey shot down a Russian fighter, could have catastrophic consequences for everyone, even without the prospect of nuclear weapons in the picture. Russia has only recently resumed “deconfliction” talks with the United States over both countries’ involvement in Syria—President Putin had pulled out of the discussions last month after the U.S. attack on an airbase controlled by Bashar al-Assad’s regime.

The presence of Russian forces in Syria makes talks with Moscow essential if a solution to Syria’s civil wars is to be found (a big “if,” to be sure). This is not a question of liking the role that Russia has taken up in Syria—it simply means dealing with the world, and the Middle East in particular, as it actually is, not as we wish it to be.

A resolution for the crisis in Ukraine will also be out of reach until the Trump administration can undertake some tough and honest talks with Moscow. Years of U.S. sanctions have failed to loosen Russia’s grip on Crimea—or Vladimir Putin’s grip on power—while Ukraine persists in a dismembered, impoverished, war-torn and fragile state. The United States can’t take Russian mischief lying down. But it also can't sanction and lecture Moscow into behaving a model liberal democracy. Hard, constructive negotiations are called for, and soon.

This is necessary not only for our interests but for our ideals. The big lie of America’s most purblind ideologues during the Cold War was that engagement was tantamount to surrendering our values. On the contrary, an America that ordinary, patriotic Russians had little reason to see as an enemy, an America that criticized yet engaged with the Soviet government disliked and distrusted by its own citizens, was an America that effectively disarmed Soviet propaganda. Internal corruption will once again be more of a focus for Russians if Moscow does not have a convenient enemy in the West. Reform in Russia will be a long time coming, but engagement can only hasten the day.

Democrats and progressives favored engagement during the Cold War, when Russia was ruled not just by a strong man but by the exponents and enforcers of a radical ideology. Yet today, for what seem like purely partisan reasons, Democrats indulge in a Russophobia that bears some comparison to the more paranoid strains of Islamophobia on the right. Just as certain crackpots envision a creeping sharia here in the United States, following inevitably wherever Muslims are to be found, so certain progressives now imagine the Russkies as devilish plotters who have mesmerized the American president in Rasputin-like fashion, replacing our laws with an alien influence.

U.S. policy toward Russia is too important to be sidelined by paranoia or so-far groundless fantasies of a second Watergate. There may be good-faith disagreements between Trump and the Democrats over how to approach Moscow—if the Democrats think that Trump is too soft, they should better explain how their hard line would work. What they should not do is resort to cheap exaggeration and grandstanding. Republicans did that in the Benghazi hearings with Hillary Clinton, and they only made themselves look like fools. If the Democrats do the same thing here, much worse will come of it: we will be on the path to an new Cold War, or worse.