Donald Trump Must Not Banish Europe 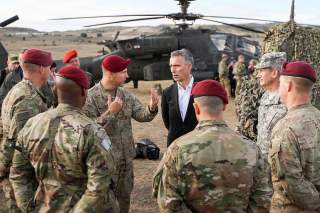 Related to this, of course, is the problem of Turkey. At a moment when Turkey is becoming more strategically important, because of the cauldron of conflicts in the Middle East, Ankara is emerging as a difficult ally. In the face of the migration crisis and Turkey’s role in helping manage it, the Europeans have been prepared to take a less values-focused, more transactional approach to dealing with President Recep Tayyip Erdogan. But in the face of his broad-based purge launched in the aftermath of the failed coup attempt in July, it has become harder for the Europeans to look the other way. Washington has faced a similar dilemma, but by and large has given priority to its strategic interests in working closely with Turkey in Syria over concerns about postcoup domestic crackdowns. Under a President Trump, who seems to admire Erdogan, this realist policy is very likely to continue.

There is, finally, the issue of trade. The Transatlantic Trade and Investment Partnership (TTIP), proposed four years ago with great fanfare on both sides of the Atlantic, has fizzled, as trade deals have become political targets for populists and other groups. In the United States, the finalized proposal of the Trans-Pacific Partnership has received the most attention, with both Trump and Hillary Clinton opposing the measure during the campaign. In Germany, however, TTIP has emerged as surprisingly controversial, despite its initial endorsement of the underlying concept. Ironically, TTIP could serve as a model for the type of trade agreement that a Trump administration might support. Unlike earlier trade agreements, such as NAFTA, TTIP would be unlikely to facilitate the relocation of companies (and jobs) from higher-cost developed countries to lower-cost emerging markets. Instead, TTIP focuses on developing a common regime for regulatory recognition that would facilitate U.S.-European trade while reducing the regulatory burden for companies on both sides of the Atlantic. Both conventional Republicans and Trump’s populists should find this idea attractive. If a new President Trump decides, early on, to visit Brussels to attend both a NATO summit and a meeting of the European Council, he should consider bringing with him a proposal for giving TTIP new impetus.

All in all, it should be understood that in the era of Trump, Europe-America relations will not simply fall into place. Both sides will need to work hard to keep things on track. But the strategic advantages of pursuing common interests, in developing a new relationship with Russia, addressing terrorism in the Middle East and in managing a rising China, are obvious. At the end of the Cold War, there was much discussion about the inevitable worldwide triumph of Western values—Francis Fukuyama's famous “end of history.” But rather than an end of history, the West—Europe and America alike—has engaged over much of the last two decades in a holiday from history. It is time to get back to work.

Richard Burt, chairman of the National Interest’s advisory council, served in the State Department as U.S. ambassador to Germany, assistant secretary of state for European and Canadian affairs, and director of the Bureau of Politico-Military Affairs.