Donald Trump Needs a Strategy for the Asia-Pacific Region 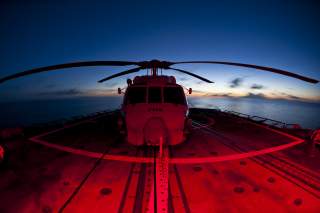 Seventy-five years ago, Gen. Douglas MacArthur made his escape from the Philippine island base of Corregidor, avoiding the tightening Japanese noose and ensuring he would live to fight another day. He arrived in Australia on March 17, 1942, and three days later made his famous declaration: “I came through and I shall return.” Of course, return he did. And although the United States quickly granted the Philippines independence after the war, U.S. forces remained forward stationed there for decades, with the two countries forming an enduring alliance.

Today, with North Korea finding new ways to outdo itself and with Washington, DC possibly seeking to upgrade ties to Taiwan, Southeast Asia may seem like a strategic sideshow. Indeed, despite the administration’s somewhat surprising focus on Asia since the inauguration, the Trump White House has paid it precious little attention. That is a mistake. For a time during World War II, Japan’s conquest of the subregion tipped the Asian balance of power in favor of the Axis. In the war’s aftermath, American planners recognized that Southeast Asia would play a similar role in determining the power balance between the United States and its Pacific allies on the one hand and its Eurasian foes on the other. This remains true. As such, the Trump administration should prioritize developing a strategy for Southeast Asia if its hopes to ensure a favorable balance of power across the Asia-Pacific.

MacArthur’s flight from the Philippines is just the latest in a series of dark anniversaries in Asia, all of which serve as potent reminders of Southeast Asia’s geostrategic centrality. February 15 marked the seventy-fifth anniversary of the fall of Singapore to Japan, which Winston Churchill later described as “the worst disaster and largest capitulation in British military history.” Just four days later, on February 19, 1942, Japanese aircraft would launch a raid on Darwin, Australia, with bombers flying off of aircraft carriers and from airfields on Ambon and Celebes as well as from islands in the Dutch East Indies (modern-day Indonesia), which Japanese forces had conquered since the attack on Pearl Harbor.

With the exception of Vietnam, which Vichy France continued to nominally administer but which hosted Japanese troops, Southeast Asia was, until December 7, 1941, a preserve of Western power in the East. Barely two months later, it would be a playground for the Japanese military.

The fall of Singapore mattered for a number of reasons. Although the capture of Java and Sumatra were yet to come, British capitulation in Malaya signaled the (ultimately temporary) success of Japan’s “Southern Strategy.” Tokyo now had access to the region’s abundant natural resources, with which it could feed the Japanese war machine. Meanwhile, the British war effort in Europe was deprived of those very same resources.

Moreover, in capturing Singapore and, one month later, Java and Sumatra, Japan took hold of the main gateways to the Indian Ocean. The Imperial Japanese Navy was soon raiding shipping in the Indian Ocean and Bay of Bengal. Japanese carriers resupplying at Staring Bay in Celebes (modern-day Sulawesi) launched the raid on Darwin in February and another on Christmas Island, in the Indian Ocean, in March. In April, the IJN attacked Colombo and Trincomalee Harbor on Ceylon (modern day Sri Lanka), sinking the aircraft carrier HMS Hermes, among other British and Australian vessels. Tokyo may have failed to meaningfully diminish British sea power in the Indian Ocean, but it did deny the Royal Navy outright sea control of those waters.

Third, although the British, French and Dutch would return to the region following the war’s conclusion, the fall of Singapore marked the biggest, though not the last, nail in the coffin of colonialism in Asia. As Lee Kuan Yew wrote in his memoirs:

My colleagues and I are of that generation of young men who went through World War II and the Japanese Occupation and emerged determined that no one—neither the Japanese nor the British—had the right to push and kick us around. We are determined that we can govern ourselves and bring up our children in a country where we can be proud to be self-respecting people.

When the war came to an end in 1945, there was never a chance of the old type of British colonial systems ever being recreated. The scales had fallen from our eyes and we saw for ourselves that the local people could run the country.

The Japanese sweep through Southeast Asia gave new life to independence movements that returning colonial masters would not be able to suppress. The geopolitical consequences of this epochal shift remain evident to this day.

From its dominant position in Southeast Asia and the South Pacific, Japan sought to keep the Western powers out of East Asian seas and to neutralize Australia as a base of allied operations and as a power in its own right. The Darwin bombing remains to this day the largest foreign attack on Australian soil, and was the first of approximately one hundred Japanese air raids on northern Australia in 1942 and 1943.

Australia’s unique status as a continent nation has afforded it great security. But while surrounding oceans provide Australia with strategic depth, they also can act as freeways for aggressors should sea control fall to an unfriendly power. Darwin is approximately 3,400 miles from Tokyo. Once Japan launched its campaign of conquest, however, it essentially erased that distance.

What bearing do events of seventy-five years ago have on Asia today? The invasions of the Philippines and Dutch East Indies and the Malaya Campaign, which culminated in the fall of Singapore, should remind of us of Southeast Asia’s geostrategic importance. Of course, during World War II, London’s primary concern was the Western Front. Washington’s efforts were similarly focused on Europe and on the western Pacific. Unlike in Europe, however, Britain actually lost territory in Southeast Asia. It was in Southeast Asia that Japan acquired the resources it needed to fight a land war in China and a naval one in the Pacific. Japan also acquired the positioning it needed to project power into the Indian Ocean and to repeatedly bomb Australia, raising fears of invasion. Recall as well the Burma Campaign, which spanned nearly the entirety of the Pacific War, was fought to reoccupy Burma and open a supply line to Chinese forces fighting the Japanese. The campaign resulted in some two hundred thousand allied casualties, primarily British and Chinese, but also including more than three thousand Americans.

Southeast Asia may not have been at the center of the fight, but it was no strategic sideshow. Simply put, the region was important due to the sea lanes that pass through it; due to its proximity to and abutment of India and China; and due to the resources to which it plays host. This is all essentially true today as well. The sea lines of communication that stretch through Southeast Asian waters are key shipping conduits in the global economy; they are likewise key routes through which the United States, China, India, Japan and others project military power. The region acts as a buffer—or a link— between China and India, as well as a buffer between Australia and Asia’s major powers. Southeast Asian waters can provide strategic depth to the littoral states that control them or invasion routes for those that don’t. Lastly, the region is rich in resources—and, today, hosts large and growing markets—on which both Southeast Asians and others rely for their economic well-being. These features will continue to shape the approach of external powers to Southeast Asia in the twenty-first century.

Given these enduring truths, the United States and its allies have an interest in the security and stability of Southeast Asian states. Indeed, one could argue that Australia’s security is intimately tied to that of its neighbors. Australia today may take comfort in its distance from China—it is approximately 2,600 miles from Darwin to the Chinese naval base at Sanya—but China is already narrowing that expanse. Mischief Reef is eight hundred miles closer. Should China begin conducting anti-piracy patrols in the Sulu Sea, as Philippine president Rodrigo Duterte has suggested, that could regularly bring Chinese forces four hundred miles closer still. Unlike Imperial Japan, China need not conquer territory outright to extend its reach into and beyond Southeast Asia.

The Obama administration’s deeper engagement with Southeast Asia and China’s aggressive moves in the South China Sea gave impulse in recent years to a realignment in the region, which saw American influence grow at the expense of China’s. Those gains, however, may prove to be illusory. The election of anti-American Rodrigo Duterte in the Philippines has raised questions about the future of the alliance. Donald Trump’s withdrawal from the Trans-Pacific Partnership has led to concerns about American dependability in Malaysia, Singapore and especially Vietnam. An ongoing corruption scandal in Kuala Lumpur, which now includes a Justice Department investigation involving Prime Minister Najib Razak, has created tension in the bilateral relationship. Also, Indonesian president Joko Widodo appears more interested in securing Chinese investment than in advancing ties with the United States.