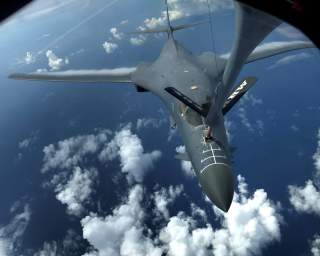 The rhetorical war of words between President Trump and North Korean leader Kim Jong-un has made it far more difficult to de-escalate the mounting crisis over the North’s nuclear weapons and ballistic-missile programs. But so, too, has a failure to come to terms with certain cruel and painful realities about the current situation. These ground truths aren’t pretty, and they may well be politically inconvenient for the Trump administration to accept. But without coming to terms with them, it’s doubtful that the Trump administration will be any more successful in managing let alone resolving the North Korean nuclear challenge than any of its predecessors. H. L. Mencken once opined that in a democracy it’s unfashionable to talk about the disease without discussing the remedy. And in the case of North Korea we must first see the world the way it really is before launching into a set of unrealistic and unrealizable remedies to fashion it the way we want it to be.

A War of Words Could Turn into a War

The provocative rhetoric from Kim is expected and predictable—both for his domestic consumption and maintenance of his tough and determined image on the world stage. The rhetoric from President Trump in response is both careless and irresponsible. The president, not once but twice, used intemperate and committing language (“the likes of which the world has never seen”), which plays into Kim’s hands, provokes him and causes severe upset and concern on the part of China, Japan and South Korea. Mr. Trump has put himself and the United States in the stunningly difficult position of now having to respond strongly with some action to such a test or to back down and thus reveal weakness and lack of resolve. These verbal redlines—regardless of the North Korean rhetoric that instigated them—are counterproductive. Trying to compete with Kim in a hyperbole contest sets in motion an escalatory cycle that makes America look small and insecure.

We Will Have to Live with North Korean Nukes

It’s not optimum, but we have no choice. It’s magical thinking that North Korea will give up its nuclear weapons any time soon, if ever. In contrast, deterring, defending against and containing the North Korean nuclear threat are all feasible and realistic options. There is no shortage of good ideas for how to apply these strategies to the Korean Peninsula—through declaratory policy, military operations, additional missile-defense deployments and improvements to U.S. and South Korean forces, to name but a few.

Strategic deterrence has worked with the Soviet Union, Russia and China throughout the Cold War, and it will work with North Korea. First, Kim does not have a death wish—for himself, the Kim family dynasty or his country—and he is neither a crazy nor irrational madman. His primary motivations for acquiring an ICBM capability are defensive—to deter the United States from invading his country and overthrowing his regime, and to prevent reunification of the peninsula under South Korean control. Why would he take actions—a nuclear attack against the United States, South Korea or Japan; or an invasion of South Korea—that would result in the very outcomes he seeks to prevent and has paid a high price in sanctions, resources and isolation to achieve?

Kim also probably hopes to use North Korea’s nuclear weapons to coerce South Korea into making political concessions (e.g., ordering a withdrawal of all U.S. forces from South Korea), or to deter the United States from coming to the defense of South Korea in the event of a North Korean attack. But the inconvenient truth for Kim is that, historically, it has been exceedingly difficult for a state to successfully use nuclear weapons to coerce another nuclear-armed state or a state without nuclear weapons that has a security guarantee from another nuclear-weapons state. If he hasn’t already learned the lesson that nuclear weapons are unusable for political purposes and their only value is to deter nuclear threats against a country’s security and sovereignty, he soon will—as long as the United States remains firm in its resolve to maintain its nuclear umbrella over South Korea and Japan.

China Will Not Solve the North Korea Problem

Beijing’s cooperation is a necessary but insufficient condition. China’s role as the indispensable nation on the North Korean nuclear file has become an idée fixe in the Trump administration. It’s easy to understand the conviction that if China wanted to bring North Korea to heel, it could: China supplies almost all of North Korea’s fuel and food and accounts for 90 percent of the North’s imports. But this view ignores Pyongyang’s resentment of its dependence on China and its fear of Beijing’s power and influence. And it also assumes that it’s in China’s interest to do U.S. bidding and to reduce Kim’s power on the peninsula. Right now, China appears to be sitting on the sidelines, annoyed with both Washington’s intemperance and Kim’s recklessness. China doesn’t know where Trump is heading. And other than an unstable North Korea that might result from too much external pressure, what Beijing fears most is a powerful U.S.-backed South Korea pressing its advantage in its own backyard and an America—together with Japan and South Korea—extending its influence in the region. Indeed, Beijing isn’t willing to press North Korea too hard precisely because Pyongyang represents an important hedge against expanding American power.

Pressure Alone Will Not Suffice

Not by itself, and not without a political strategy to reengage with North Korea diplomatically. Unless you’ve been living in a cave for the past several years, it is obvious that the DPRK has a serious nuclear-weapons and missile-development program that is aimed at meeting military and operational objectives—first and foremost, the capability to hit targets in the continental United States with nuclear-tipped ICBMs. It will therefore continue to test both nuclear weapons and long-range missiles until the North Korean military can assure Kim that it has a credible operational capability to hold targets of value at risk in the United States. It is difficult to say what Kim would do with this capability. But until this threshold is reached, trying to pressure the North to end its testing—with threats of regime change, preventive military strikes and truly draconian sanctions—is a mug’s game, either because they will not work or they would come at an unacceptable price, or both.

The North sees the United States as an existential threat and an ICBM capability as its only insurance policy against U.S. invasion or regime change. Unless and until Kim no longer believes the United States has a hostile policy toward North Korea and is a threat to the country’s security and sovereignty, he will do anything to develop this capability and protect it should he ever decide to sit down to negotiations with the United States.

A former Pakistani prime minister once said that he would make his people eat grass if that were necessary to acquire nuclear weapons. Kim would do the same to his people—in fact, probably worse. As was the case with sanctions imposed against Saddam Hussein, Kim will prioritize resource allocations and dwindling foreign reserves for his nuclear and missile programs and pass the pain to the North Korean people. Moreover, North Korea has been very adept over the years in evading sanctions, aided and abetted by both the Chinese and the Russians, who have been, to put it mildly, uneven in their implementation, monitoring, and enforcement of these sanctions. The Chinese will be willing to turn up the sanctions heat some more on the North Koreans, but never to the point where Beijing believes it will lead to instability in North Korea and a greater risk of regime change.

Don’t Walk Away from the Iran Deal

It would make any diplomatic solution with North Korea much harder. However imperfect the Joint Comprehensive Plan of Action (JCPOA), the president’s seeming determination not to certify Iranian compliance in the fall or to manipulate Iran into violating the accord has dire ramifications in North Korea. Walking away or fooling around with the JCPOA would send an unmistakable signal that America can’t be trusted; that any diplomatic agreement would be subject to a president’s personal whims and that diplomacy is not a viable option. Nor would other powers, particularly China, want to expose themselves to humiliation and a loss of credibility for backing a diplomatic fix only to see it undermined by U.S. actions or buyer’s remorse.

Only Washington Can Give North Korea What It Wants

Others can help with the North Korean challenge, but America holds the key. And that’s because in Kim’s calculations only Washington can give him what he really wants: recognition as a nuclear power, acceptance of North Korea as an independent and sovereign state, security from regime change and sanctions relief. And that means not contracting the nuclear and other problems out to other powers and facing up to the need for direct diplomatic engagement with North Korea to at least test the proposition that a functional dialogue is possible. As unimaginable as it may be now, the talking cure is probably the only way to begin to defuse the current situation and set the stage to explore longer-term solutions.