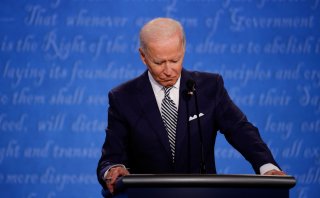 Sixty years ago, as a sixteen-year-old, I watched the first televised presidential debate. I’ve watched every one of them since. Without hesitation, I consider this one the worst of them all, and that’s saying a lot. It is hard to imagine any viewer coming away from The Tuesday Night Fights feeling anything but disgusted and depressed. If I had to give it a title, it would be “Grumpy Old Men: The Sequel.” Both candidates were rude, crude, and sloppy with their facts. It was more like a cuss fight in a nursing home than a debate for the highest office in the land.

In the aftermath, the big question in my mind—perhaps the only interesting one—is whether or not either candidate (or both) will learn any useful lessons between now and the next debate. We can only live in hope.

As to this debate’s impact on the election, I doubt if it changed many minds. But this doesn’t mean it was a wash. Donald Trump, trailing substantially in almost all polls—and a vulnerable incumbent saddled with a pandemic, a paralyzed economy, and an overwhelmingly hostile mainstream media—needed much more from this debate than Joe Biden did. It was his first face-to-face opportunity for a breakout moment: the chance to make Biden the issue instead of Trump, to raise doubts about him, and to show voters why they should be more worried about a Biden presidency than his own.

While, in his own crude, blustery way, the president raised some valid concerns about his opponent’s record, past and present veracity, and general competence, he fell short of making Biden the issue instead of himself. To win, this is something he still needs to do.

For his part, Joe Biden performed to the same low standard. Often groggy and mumbling, he threw around epithets like “fool,” “clown,” and “liar” every bit as gratuitously as his opponent. Some months ago, in my column in The American Conservative, I predicted that this presidential campaign would be less a case of Battling Titans and more a case of Dueling Dorks. It certainly was in the opening debate.

One final qualifier. The Joe Biden on display in the first debate is probably as good as he’s going to get. He stumbled, grumbled, prevaricated and repeatedly lost his thread, although he never went into his full King Lear mode. The vulnerabilities Biden displayed aren’t going to go away. By contrast, Donald Trump put in a very subpar performance. If he is capable of realizing this, and if he decides to apply himself between now and the next debate, the dynamics could change. Otherwise, the remaining two debates will just be further installments of “Grumpy Old Men: The Sequel,” probably playing to dwindling—and increasingly appalled—audiences.