Is Donald Trump Really Getting Ready to Run Again? 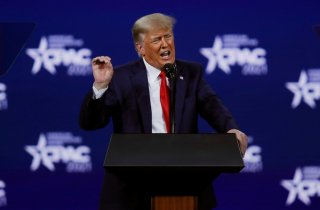 Former President Donald Trump teased another run for the White House at the Conservative Political Action Conference (CPAC) in Orlando, Fla. and declared his devotion to Republican Party reelection efforts, squashing speculations that he’ll form his own third party.

Trump addressed a cheerful crowd of party members and supporters on Sunday in his first political speech since leaving Washington, DC in January, an appearance that perhaps launched an unofficial 2024 presidential campaign.

“Actually, as you know, they just lost the White House,” he said, referring to the Democratic Party and echoing baseless claims that the 2020 election was “rigged” and “stolen” from him. “But who knows, I might even decide to beat them for a third time.”

This theme—bolstering false claims about the recent election results—was painted throughout his speech, insisting that a Republican president will be “triumphant” in four years, in which he said, “I wonder who that will be. Who, who, who will that be, I wonder.”

“We began it together four years ago, and it is far from being over,” Trump said, citing his 2016 presidential campaign. “Let there be no doubt we will be victorious, and America will be stronger and greater than ever before.”

The former president also noted that he will not separate from the GOP and will instead work to ensure Democratic defeat in the 2022 midterms and in the White House in 2024, initiatives that triggered a sea of excitement throughout the crowd, as attendees chanted “USA!” and “Four more years!”

Trump also pushed that President Joe Biden led “the most disastrous first month of any president in modern history,” as he blasted the administration’s work on immigration, energy and other executive orders that have been implemented since Biden took office.

Trump also called for removing early voting and mail-in ballots for all voters, with the exception of the sick and Americans overseas. But more than one hundred million Americans voted early or by mail for the 2020 presidential election, due to fears of a rapid spread of the coronavirus.

The former president’s address came immediately after the release of a 2024 presidential straw poll of CPAC attendees that revealed that 68 percent said they wanted Trump to run again, and 55 percent supported Trump’s election in 2024 if he decides to run. Florida Gov. Ron DeSantis came in second at 21 percent, while no other candidate achieved support in the double digits.

When Trump was out of the pool of contenders, however, DeSantis garnered a first-place spot with 43 percent of support, followed by South Dakota Gov. Kristi Noem at 11 percent. Donald Trump Jr. ranked in third with eight percent, and former vice president Mike Pence had one percent.

The poll also uncovered that 97 percent approved of Trump’s performance in office.

While Trump has clearly cemented a dominant position in the GOP, he hasn’t explicitly said whether he plans to take a crack at running for a non-consecutive term. Experts, however, say that waiting to announce a 2024 bid could be the best thing for his candidacy.

“He has a lot to gain by waiting. He keeps his potential opponents off guard,” Ken Kollman, a political science professor at the University of Michigan, said. “Cruz, for instance, would not be able to go full force to run for president until he knows what Trump will do. Same with Hawley, Graham, Noem and Cotton.”

Raymond La Raja, a political science professor at the University of Massachusetts Amherst echoed Kollman’s remarks, noting, “He gains nothing by announcing so soon. Everyone knows he is the frontrunner and he has major support in the electorate that few can match. By holding off, he makes it harder for others to calibrate their decisions and raise money.”

La Raja added that declaring a presidential run right now could “put constraints on his ability to fundraise for various committees that will eventually help him in the next election,” since confirmed candidates must follow strict federal election laws on fundraising, morphing an interference with external fundraising.

There are nearly a dozen rumored 2024 White House hopefuls, creating a crowded presidential playing field, and a remarkably competitive one if Trump decides to seek office. And considering his iron-like grip over the party, he has the powerful ability to prolong a speculated bid. The longer he waits to announce a candidacy, the harder it will be for prospects to emerge into the national spotlight to rally enough support for a successful campaign.

“Trump can play kingmaker if he decides not to run, and can be kingmaker for congressional candidates regardless,” Kollman said. “He can raise money without having to commit to running.”

The GOP has been in ruins since Trump left the White House earlier in the year, with lawmakers debating how closely linked they will be to the former president, and whether that same link can help or hurt reelection efforts moving forward.

“The ones who have stuck with him have to wait and see what Trump's plans are. For those who have criticized him, their strategies depend on whether they have reelection to deal with in 2022. If they do have reelection in 2022, then they have to tread carefully,” Kollman added.