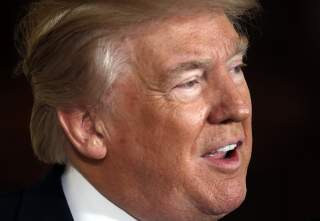 Editor's Note: In our latest Facebook Live interview (please like our Facebook page to see more of these events) Jacob Heilbrunn, editor of the National Interest, and Daniel McCarthy, editor-at-large of the American Conservative, discuss Donald Trump’s political risks in dealing with Russia, health care and also whether the Democratic Party needs a facelift.

Daniel McCarthy recently wrote an article on the political, not legal, issues that will most severely challenge Trump’s presidency. An excerpt of the article can be found below:

In all likelihood, the president is already under investigation or soon will be. Comey testified to Congress that one of his “leadership team” at the FBI did not want him even to assure the president in private that he was not a subject of the Russia investigation because the inquiry into the Trump campaign’s dealings with Russia might eventually focus on Trump himself. The FBI was prepared to cast a wide net—and now that the investigation is being headed by a special counsel, there are no limits to how wide it will be.

Special counsel investigations have a way of turning into fishing expeditions, as Bill and Hillary Clinton know too well. Kenneth Starr started out in 1994 charged with looking into the Clintons’ Whitewater real estate dealings. But by the time he issued his final report in 1998, he had not only shifted his focus to whether Bill Clinton had perjured himself in testifying about hanky-panky with a White House intern, Monica Lewinsky, he had also investigated everything from Vince Foster’s suicide to the firing of White House travel office personnel, the improper handling of FBI files, and a wide variety of the Clintons’ business activities before Bill became president. The Clintons, who were hardly ethically spotless to begin with, emerged from the ordeal politically unscathed—the GOP lost seats in the 1998 midterms, while Hillary was elected to the Senate in 2000—but habitually paranoid. That was one reason Hillary Clinton kept her email on a private server during her time as secretary of state. Democrats and progressives decried what was done to the Clintons.

Now they are cheering what is rapidly turning into a similarly open-ended inquiry into Donald Trump. The FBI began with a probe into Russian meddling in last year's election. But now, with Robert Mueller appointed as special counsel by Deputy Attorney General Rod Rosenstein, reports in the Washington Post and the president’s own comments on Twitter indicate that investigators are taking on everything from Jared Kushner’s business relationships with Russians to whether President Trump engaged in obstruction of justice by firing Comey. All this only six months into the new administration—what’s to stop Mueller from wandering as far afield as Starr did in the years to come?

Perhaps Trump can avoid it, if it’s true that the president has already considered firing Mueller. Rosenstein told the Senate Appropriations Committee last week that only he himself could cashier the special counsel, and “As long as I’m in this position, he’s not going to be fired without good cause.” But the president can always fire Rosenstein first.

That would not solve his problems, of course. Significantly, the Washington Post claims that even before Mueller’s appointment, the Justice Department had opened an investigation into Trump for possible obstruction of justice. The president evidently faces trouble not just with one or two officials he can fire, but from the Justice Department and FBI more widely.