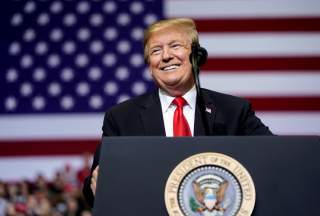 He had the fighting instincts of a badger trapped by hounds . . . Badgers don’t fight fair, bubba. That’s why God made dachshunds.

With the public release of the Mueller report, comparisons are once again being made between the Trump presidency and that of Richard Nixon. There are indeed multiple similarities. But they may not be the ones observers have in mind. Consider the following points of comparison:

As president, Richard Nixon harbored an ambition to build what he called a “new majority,” unifying traditional Republicans with culturally conservative Democrats. This center-right majority would be based upon patriotic and socially traditional values, rather than retroactive opposition to FDR’s New Deal. Denounced by his numerous enemies as devoid of conviction, Nixon in fact believed in the moral and intellectual bankruptcy of what he called the nation’s eastern establishment. But he was immensely flexible on domestic policy specifics, had no inherent objection to federal government action, and did not believe a libertarian position to be a vote-winner at the national level. In practical terms, Nixon oversaw major increases in federal government spending and regulation over a wide range of policy areas. Entitlement benefits were expanded, for example, and important new consumer safety regulations introduced. Yet the hard-hitting Republican also fought highly visible battles on behalf of culturally conservative concerns over drugs, crime, amnesty, campus unrest, antiwar demonstrations, and the forced busing of schoolchildren to desegregated schools. In sum, Nixon looked to build a personal political legacy on behalf of a “silent majority” of “forgotten Americans”—via the Republican Party—through active management of the nation’s economy combined with culturally conservative populism.

President Donald Trump, for his part, has spoken of an aspiration to turn the GOP into a “worker’s party.” At the grassroots level, his coalition combines two main constituencies into a populist-conservative alliance. Both components receive attention from the Trump administration on key policy priorities. Traditional Republicans secure economic deregulation, tax cuts, oil and gas production, conservative education policies, increased military spending, and judicial appointments at the lower and Supreme Court levels. Blue-collar populists—Trump’s earliest supporters—receive renegotiated U.S. trading arrangements, a hard line on illegal immigration, a presidential commitment to Social Security in its current form, and checks on unlimited intervention overseas, along with the certain knowledge that Donald Trump will verbally combat common enemies every day of the week. Directionally, the overall policy posture is center-right. But it is not the specific version of center-right initially favored by the GOP’s upscale urban postgraduate segment, and since this segment carries disproportionate attention in elite commentary—as does Trump’s smash-mouth style—roiling tensions persist.

The international policy complement to Nixon’s “new majority” was a focus on limited strategic retrenchment, great-power politics, and a realistic bolstering of America’s position. Together with his very capable national security advisor, Henry Kissinger, President Nixon dramatically improved U.S. relations with Mao Zedong’s China, relaxed tensions with the Soviet Union, and oversaw a fighting retreat from Vietnam. The overall aim was not to abandon anti-Soviet containment—a goal cherished by Nixon’s critics on the Left—but to pursue it in a more sustainable and self-disciplined way, using carrots as well as sticks. Nixon and Kissinger did not believe that the United States held every secret key to social progress in developing countries. They consequently backed U.S. allies, and opposed U.S. adversaries, without a primary focus on domestic ideologies.

On foreign economic policy, Nixon made the fateful decision to unilaterally suspend the dollar’s convertibility into gold, with the aim of strengthening America’s domestic economic health and freedom of action. On national-security policy, he emphasized balances of power. Through triangular diplomacy with Moscow and Beijing, Nixon and Kissinger hoped to improve U.S. diplomatic leverage, place the Indochinese conflict within a proper sense of priorities, and reorient from peripheral to vital interests. Allies were asked to do more in their own defense, in an international system described by Nixon as increasingly multipolar. As Kissinger put it, “America cannot - and will not - conceive all the plans, design all the programs, execute all the decisions and undertake all the defense of the free nations of the world.”

President Trump has little use for the U.S. foreign policy establishment, but he makes an exception for Henry Kissinger, whose achievements he has always admired. And for all their vast differences in background, personality, and expertise, Trump’s foreign policy instincts bear some resemblance to those of the Nixon-Kissinger team.

According to his own words going back decades, Donald Trump believes that the United States has born a disproportionate cost of global leadership in both military and economic terms. Evidently, he remains open to a wide variety of specific foreign policy outcomes. But his starting point appears to be that the United States must claw back greater material benefits from its existing world role, through increased allied burden-sharing, renegotiated trading arrangements, and downsized nation-building exercises overseas. Human rights and democracy promotion are emphasized in certain cases, such as Cuba, Venezuela, and Iran. But for the most part, Trump does not view regime type—or regime change—as the uppermost American concern. The overall emphasis is on a particular version of American autonomy, consolidation, and realism. As the president said even after authorizing punishing airstrikes against Syria’s Assad: “We cannot purge the world of evil, or act everywhere there is tyranny…the fate of the region lies in the hands of its own people.”

As of 1970-71, Nixon’s re-election seemed quite uncertain. Republicans had not done well in the midterms, and the president’s support lagged. Nixon then went on to engineer a remarkable political turnaround. He imposed wage and price controls that were long-term counterproductive yet short-term politically popular. He reached dramatic U.S. diplomatic agreements with Beijing, Moscow, and Hanoi, burnishing his image as a tough-minded peacemaker. He took credit for a philosophically androgynous expansion of government entitlements. And he fought running verbal skirmishes with the Left on a wide range of cultural and national-security issues. This last element, in particular, was made easier by Democratic Party activists, who chose to nominate South Dakota Sen. George McGovern for president—the most left-wing candidate of the available choices. McGovern took positions on a wide range of social, economic, and foreign policy issues that were well beyond the comfort zone of moderate-to-conservative Democrats nationwide. His hapless general election campaign was easily defeated by Nixon in a landslide. Key conservative intellectuals such as William F. Buckley remained deeply uncomfortable with Nixon’s ideological defections on numerous issues. But Nixon had a pretty good feeling for Middle America, and he retained its firm support through November 1972.

The Democratic Party is far more united and well-organized today than it was in 1972. Moreover, conservatives have long since been purged from its ranks, leaving few opportunities for GOP gains on that front. Both parties should expect a close, hard contest in 2020. And as always, President Trump’s personality is the wild card. Still, the usual pattern in times of economic growth is that incumbent presidents win re-election, so long as they are not bogged down in foreign wars. Democrats in the Trump era continue to trend leftward on a variety of issues, including health care, immigration, criminal policing, religious liberty, taxation, reparations, the environment, and national defense. And while progressive party activists persuade themselves that most Americans share their specific policy views, genuine moderates and independents may be less convinced. The president retains the firm support of most Republican voters. Under these circumstances, Donald Trump does not have to convince swing voters that he is Abraham Lincoln. All he has to do is convince them that a left-liberal policy agenda is unacceptable. And he may very well do it.

On inheriting America’s wartime commitments in Indochina, the Nixon administration employed U.S. airstrikes, improved counterinsurgency methods, and direct diplomacy to pressure Hanoi at the negotiating table. Meanwhile Nixon gradually withdrew U.S. ground troops from South Vietnam. Under the January 1973 Paris peace accords, North Vietnam recognized the continued existence of a non-Communist government in Saigon, while the United States confirmed its own ground force departure. Nixon’s critics have long argued that he had no interest in or expectation of supporting South Vietnam’s continued independence with American ground troops gone. But a mountain of archival evidence, including Nixon’s presidential papers, point in the opposite direction.

Nixon and Kissinger hoped to use continued U.S. economic and indirect military support, including the threat of American airstrikes, to boost South Vietnam and stop any attacks from the North—just as they done in 1972 and before. But collapsing U.S. congressional support for Saigon, together with spillover from the Watergate scandal, left South Vietnam vulnerable. In the opening months of 1975, North Vietnamese conventional forces advanced southward with a speed that surprised even their own commanders. President Gerald Ford showed little interest in any major U.S. military reengagement, and in this he faithfully reflected American public opinion. Kissinger and others were forced to watch, appalled, as Saigon collapsed to Communist forces. The Vietnamese, both north and south, confirmed that unenforced peace treaties are worthless.