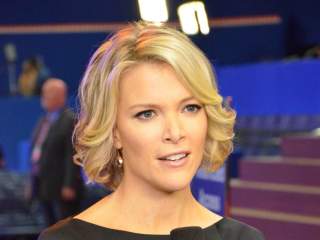 Republican presidential candidate Donald Trump has repeatedly said that Fox News anchor Megyn Kelly is overrated and treated him unfairly at the first GOP presidential debate last August. Yet with the exception of Trump’s most die-hard supporters, few on the right agree. This is a sign of Trump’s problems with women (73 percent of them currently have an unfavorable view of him), but it is also a symptom of the GOP’s wussiness to ask tough questions about a popular female anchor, as well as of its failure to challenge the insidiousness of the Left’s prevailing narrative about women.

At issue is conservatism’s decades-old battle against identity politics, in which hostility has been declared toward the grievance industry that gins up phony allegations of racial, ethnic or gender injustice.

On the Fox News Channel, Kelly has exhibited a penchant for kissing up to liberal women, fawning over their feminist agenda, berating conservative men and behaving unprofessionally toward guests. No prominent conservative has ever dared to question the perception that Kelly is an exemplary anchor, or to observe that she spends far too much time peddling a softer, kinder version of feminist dogma.

Trump is the only major national figure on the right who has challenged Kelly’s status as a demigod at Fox News. By declaring unabashedly that Kelly is not very good, Trump has—unwittingly—offered conservatives an opportunity to reflect on the grave disservice that a star on the only major conservative television network often does to conservatism.

As it turns out, Kelly’s not being nearly as good as everyone says is directly intertwined with her being not very conservative.

Long before Kelly paid any attention to Trump, she was busy badgering conservative men on Fox News. Most notable was an exchange with talk radio personality Mike Gallagher. On his show, he had referred to her maternity leave as a “racket,” griping that men do not get the same paid leave. His comments were in poor taste, but it was Kelly’s response that was far more shocking.

Well, that’s a great argument…if you believe in the virtue of state intervention in the economy. Conservatives do not, not because they do not value a mother bonding with her newborn, but because they prize private initiatives shaped by market forces, not big-government mandates on free enterprise. By a similar rationale, conservatives generally abhor raising the minimum wage, not because they are opposed to their fellow citizens earning more income, but because such government edicts are far more likely to hurt businesses and job growth.

For liberals, big government is their gospel, so they applauded Kelly’s performance. After all, a rising female star at the network founded to offer right-leaning folks fair and balanced news scolded a nationally syndicated, male, conservative radio host—using a liberal argument. Happily for them, Kelly’s exchange with Gallagher was not the only incident of its kind.

Facebook Chief Operating Officer and liberal author Sheryl Sandberg was so enamored that she cold-called Kelly to tell her, “I love you.” Kelly reciprocated by inviting Sandberg on Fox News for multiple feminist love fests. Each time, the two women engaged in lengthy grievance sessions about perceived injustices against women at home or in the workplace. Never mind that bossy women like Sandberg, who have no trouble telling other women what to do, have had nothing to say about why the Left regularly directs some of its most vitriolic and deranged attacks against pro-life, conservative women like former Alaska governor Sarah Palin.

Kelly does not limit her love for liberal women to Sandberg either. Florida congresswoman and Democratic National Committee chair Debbie Wasserman Schultz receives much adulation too. In one interview last April, Kelly went out of her way to butter up her liberal guest. “Thank you soooooo much for being here,” Kelly said, “It’s a pleasure to have you on The Kelly File.”

Compare that to the treatment Kelly accorded to Senator Rand Paul (R-KY) about a week before. During a moment of cross talk, Kelly yelled, “Let me make the comment! Excuse me, let me ask the question!”

It was an instance of great disrespect, but it is precisely the kind of behavior that wins Kelly fans on the Left. Feminists have long ago decreed that men and women are exactly the same, and in that paradigm, women haranguing men is a sign of strength and liberation. Kelly is their perfect poster child.

The question for conservatives is: how does that help your cause?

Unlike men who appear on Kelly’s show in the most solicitous fashion, Trump has refused to yield. He has said repeatedly and in different ways: “I have zero respect for Megyn Kelly. I don’t think she’s very good at what she does. I think she’s highly overrated.”

Many have been baffled by Trump’s persistent attacks on Kelly, but few conservatives have bothered to recognize the unfairness inherent in the question she posed to him at the first Republican presidential debate.

Essentially, Kelly cobbled together a number of Trump’s past comments on women and accused him of being a sexist. Most unfortunate about her line of questioning was its acceptance of the Left’s politically correct default position: every time there is any comment, insinuation, situation or controversy involving a woman and a man, the man must be suspected of sexism. It is a ludicrous line of liberal thinking but it permeates every aspect of American society. So when the most-watched female anchor on a conservative network accepts this position as guiding truth, conservatives should feel a bit nauseated.

Kelly’s question to Trump also had a specific accusation of sexism: on his hit reality television show, The Apprentice, he told a female contestant that he would like to see her drop to her knees. No one present on the show, not even the contestant, shared Kelly’s view.

Mainly, this is because Kelly’s reference was out of context and in fact unfair. In the episode, the female contestant, a former porn star, dropped to her knees before a rock star with a request. Trump, who was not present, later remarked that he would have liked to see it. Indeed, it was quite a sight, and millions of men and women who tuned into the show enjoyed seeing it. The rock star’s acquiesce to the beautiful woman’s request led to a decision that contributed to his ultimate and dramatic firing by Trump. The episode was great television—not only because it offered star power and drama, but also because it showcased through the unfolding competition a powerful concept that Trump himself has long championed: think big, take big risks and win.

None of that mattered to a debate moderator bent on seeing sexism. Trump’s comment on The Apprentice was one that neither he nor the female contestant even remembered at first brush. Ironically, Fox News, which has persistently exposed the moral bankruptcy of the grievance industry, in this case happily perpetuated its influence.

Trump, who is not exactly a movement conservative, has not chastised Kelly for her offenses against conservatism. Instinctively, however, he has sensed grave unfairness—both on the facts and in principle. He views himself as an equal-opportunity offender: as tough on men as he is on women. He also views himself as politically incorrect: not one to cower before just because a woman accuses him of sexism.

The Left, which never fails to express its love for so-called “strong women,” should have been celebrating Trump’s refusal to bend to what he calls “a double standard.” Instead, both the Left and the Right have branded Trump as a sexist.

Certainly, the aggressiveness of Trump’s attacks on Kelly has not helped his argument and has in fact masked her real flaws. His over-the-top attacks on other women have not helped either. Conservatives and ordinary Americans who believe in decorum and respect have every right to expect more from their presidential candidates. As Trump supporter Ann Coulter, quite a bomb thrower herself, has lamented, her candidate can really be “a teensy bit less low-brow.”

Of course, Trump can do more to elevate the tenor of his public pronouncements. But prominent public personalities like Kelly, whose show has plenty of redeeming value, can also learn from other journalists at Fox, such as Bret Baier, Chris Wallace and Maria Bartiromo, that asking tough questions and being professional and respectful are not mutually exclusive.

Even more important, conservatives must begin to recognize that confronting insidious left-wing feminism is a necessity everywhere, including when it surfaces in the comments of Fox’s leading female anchor. The ideology of victimhood has no place in our society or public policies, and the fight against it must be waged with vigilance and conviction.

In choosing to condemn Trump as sexist and misogynistic instead of boorish and unpresidential, many on the right—whether out of cowardice or political convenience—merely perpetuate the Left’s preference that all interactions with women be viewed through the prism of sexism.