Donald Trump Should Finish the Opening With Cuba 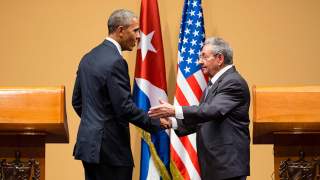 The communist king is dead. May the next one not live so long. And then may there be no other. Although the government headed by Fidel Castro’s brother, Raul, continues, Fidel’s death marks the end of an era. It is difficult to imagine a future revolutionary becoming a romantic figure while imprisoning and executing his opponents.

Today the truth about Cuba’s supposedly equal society is widely known: it is one of poverty and only for those without power. One suspects that Fidel never had to produce a ration book for food, like his countrymen.

Still, the system isn’t likely to disappear soon. Raul has been in charge for a decade, as Fidel retreated due to ill health. More than a few regime apparatchiks still believe their interest is advanced by oppressing everyone else.

What should the United States do?

Washington has been at odds with Havana since Castro’s revolutionaries took power in 1959. Cuba would have been of little geopolitical importance except for the Cold War, when the Castros turned to the Soviet Union for support. The United States initiated economic warfare against the regime, soon imposing a full embargo.

Alas, the attempt to economically strangle communist rule was no more successful than the Bay of Pigs invasion by Cuban exiles and series of bizarre CIA plots to assassinate Fidel Castro. After the Cuban missile crisis the Kennedy administration agreed not to again threaten the island with invasion, but maintained economic sanctions.

Washington’s abject failure—Castro outlasted ten presidents—caused politically sensitive lawmakers to continue doubling down, eventually even targeting foreign companies. Yet the Castros continued to rule, despite the end of economic subsidies from the defunct Soviet Union.

Indeed, U.S. behavior fit the definition of insanity: doing more of the same thing and expecting a different result. But the embargo was maintained to satisfy Cuban-Americans in the electoral vote rich state of Florida. Although younger Cuban-Americans no longer are so wedded to the embargo, no politician wanted to risk offending a still sizeable bloc of voters in an important swing state.

However, President Barack Obama began loosening restrictions during his first term and two years ago established diplomatic relations with Havana. These steps were long overdue. Official ties are a communications channel, not an international reward. After all, Washington swapped embassies with Adolf Hitler’s Germany, Joseph Stalin’s Soviet Union, and Mao Zedong’s China.

Sanctions originally were a reasonable attempt to oust a local regime allied with a global antagonist, but Moscow officially fell off the enemy list almost a quarter century ago. Vladimir Putin is no friend of the United States, but he’s demonstrated no interest in war with America. The impoverished island is a military nullity and poses no threat.

Cuba remains a repressive dictatorship, but that hardly sets it apart. Nor has the embargo freed Cuba. In fact, dissidents long had mixed feelings over U.S. policy. When I visited (legally) more than a decade ago some regime critics complained that U.S. sanctions provided Fidel Castro a ready-made excuse for its own economic failure. Elizardo Sanchez Santa Cruz, imprisoned by the regime, told me that the "sanctions policy gives the government a good alibi to justify the failure of the totalitarian model in Cuba."

Admittedly, relaxing U.S. controls offers no guarantee of transforming the system. If so, Havana would not have agreed to the diplomatic opening. Indeed, the Cuban government has actively resisted liberalization, actually launching more vicious crackdowns on political dissidents and religious believers over the last two years. But that is a testament to the fear that pervades a sclerotic authoritarian elite which recognizes that appeals to nationalism no longer can make up for pervasive poverty and repression.

In any case, since isolation has failed, Washington should try an alternative approach. Increasing contacts with the West is both seditious and destabilizing for authoritarian regimes. The long-term impact on Cuba could be especially powerful, given the large and nearby ethnic Cuban population based in Florida. The more obvious the regime’s failings are to its people, the harder it will be for Raul & Co. to keep the nation in bondage.

President Obama’s effort, though essential, is limited by the refusal of the Republican Congress to repeal statutory sanctions. Cuban-Americans are not the only ethnic group to hijack U.S. foreign policy, but they have been among the most effective, holding relations with Havana hostage.

While a candidate, Donald Trump sought votes by attacking Obama’s policy. The “president’s one-sided deal for Cuba benefits only the Castro regime,” Trump declared. He told a Florida audience that he would reverse Obama’s policy unless “the Castro regime meets our demands,” which include “religious and political freedom for the Cuban people and the freeing of political prisoners.”

Of course, these were great applause lines. What American wouldn’t like to see Cuba free? However, governments around the world typically have one overriding priority: self-preservation. The thugs ruling in Havana aren’t likely to give up power, which they have spent a half century jealously guarding, for what they view as a mess of pottage.

So to say the United States won’t engage Cuba unless it surrenders is to say that the United States won’t engage Cuba. If that is the president-elect’s position, he should be honest about it. And he should acknowledge that the likely result is to preserve for years, perhaps decades—after all, it has been a quarter century since the Soviet Union disappeared, along with subsidies for its impoverished Caribbean dependent—Cuba’s communist system. Despite manifold predictions and expectations, the system staggers on and on, despite the embargo.

Donald Trump has a unique opportunity to transform U.S. foreign policy, tossing aside the shibboleths, nostrums, and myths which have cost the American people greatly. He wasn’t supposed to win, but he did so, while challenging both Republican and Democratic orthodoxy. He should act accordingly.

Now he should drop the campaign rhetoric and do what is right, lifting the dead hand of past policy. He should preserve Obama’s executive actions while pressing Congress to lift other restrictions. Doing so would be a victory not for the communist regime but the Cuban people. The best way to speed the day when they will be free is to immerse Cuba in the world. Doing so won’t guarantee the victory of liberty. But it would offer the best strategy to achieve that end.