Donald Trump Should Go to Japan 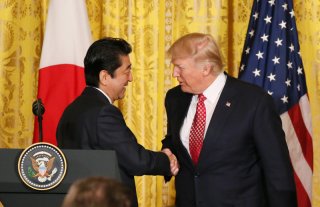 Since November 2016, Japanese prime minister Shinzo Abe has visited the United States on three separate occasions. The first visit occurred in November, shortly after President-elect Trump’s electoral victory. After meeting with Mr. Trump at his residence at Trump Tower, Abe stated: “Alliances cannot function without trust. I am now confident that president-elect Trump is a trustworthy leader.”

The second visit occurred in December 2016, when Prime Minister Abe joined President Barack Obama in a ceremony at Pearl Harbor. After offering heartfelt condolences to those killed in the attack seventy-five years earlier, Abe stated: “We are allies that will tackle together, to an even greater degree than ever before, the many challenges covering the globe.” He characterized the U.S.-Japan alliance as an “alliance of hope.”

Abe’s third visit to the United States occurred in February 2017, and included a visit to President Trump’s Mar-a-Lago residence in Florida. At a news conference held at the White House, Prime Minister Abe stated that “the cornerstone of peace and prosperity in [the] Asia-Pacific…is the strong Japan-U.S. alliance.” He further stated that he and President Trump “will work together to further strengthen our alliance.”

It is not a coincidence that such high-level visits from Japan are occurring at this time. Japan is experiencing a tense and deteriorating security environment, driven by what it perceives to be dangerous power shifts occurring in Asia and around the world.

The second challenge involves China’s increasingly aggressive actions in the East China Sea. Bolstered by its 2013 declaration of an Air Defense Identification Zone over disputed maritime areas, China has attempted to unilaterally change the status quo vis-à-vis the disputed Senkaku Islands (known in Chinese as Diaoyu). According to Japan’s Ministry of Defense, Chinese air intrusions have helped spur some of the highest levels of Japanese jet fighter scrambles since the Cold War.

The third challenge is Russia’s increasingly assertive activities in maritime areas and the airspace surrounding Japan. Recently, Russia announced plans to increase its military presence on certain Kuril Islands, which are also claimed by Japan.

Simply stated, Japan lives in a dangerous neighborhood and depends heavily on the security guarantees provided by the United States to mitigate these threats. In his foreword to the annual Defense of Japan white paper, Defense Minister Gen Nakatani stated that “the Japan-U.S. Alliance is the centerpiece of Japan’s security and plays a critical role as the cornerstone of the peace and prosperity of the Asia-Pacific region.”

This is why the February visit of Secretary of Defense James Mattis was so significant. In a dialogue with Prime Minister Abe, Mattis stated that the United States stood “100 percent shoulder-to-shoulder with [Japan].” However, Mattis also made a point of emphasizing the benefits that the U.S. gains from the alliance. From a strategic perspective, the United States arguably gains three key advantages from its alliance with Japan.

The first is geography. Japan allows U.S. forces to be deployed in a part of the world where “tyranny of distance” can constrain reaction times and effectiveness. Japan hosts about fifty thousand U.S. troops, who are given access to eighty-nine facilities across the country (about half of U.S. personnel in Japan are based in Okinawa). Japan pays roughly $2 billion annually to host these U.S. forces. The net benefit for the United States is forward presence, which gives the United States the ability to reach potential Asian-based trouble spots in a timely and efficient manner.

The second advantage is rising partner capacity. In the past, some U.S. officials have criticized Japan’s aversion, partially attributable to Article 9 of its constitution, to deploy forces far from Japan or to engage in combat missions. In recent years, due to a series of defense reforms—the latest of which occurred in 2015—Japan has developed defense capabilities that are increasingly commensurate with its global political and economic stature. As a result, Japan in increasingly transforming itself into a “real” ally for the United States.

The third advantage is strategic. The U.S.-Japan alliance forms the foundation for the “rebalance to Asia” strategy first announced during the Obama administration. Although Secretary of State Rex Tillerson, during his visit to Japan in March this year, never publicly mentioned the word rebalance, he nevertheless indicated that the U.S. commitment to both Japan and the Asia Pacific region would continue in the Trump administration.

During Prime Minister Abe’s February 2017 visit to the White House, he extended a formal invitation to President Trump and Vice President Pence to visit Japan (invitations that Trump reportedly accepted). A visit by President Trump to Japan would be extremely valuable for at least two reasons.

First, it would provide important symbolism, confirming that the U.S. intended to maintain its traditional alliance relationships and commitments in the region, particularly those countries that host substantial numbers of U.S. military personnel, such as Japan.

Second, it would signal that the Trump administration is committed to continuing and sustaining an overall Asia-Pacific security architecture that has served the interests of the United States for over six decades by preventing a major-power war and its collateral humanitarian and economic consequences.

Paul J. Smith is a professor of national security affairs at the Naval War College. The views expressed in this essay are the author’s own.