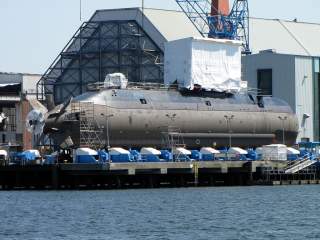 Thirty years ago, I led a joint Department of Defense/Israeli Navy (IN) team that evaluated Israel’s naval modernization program. Our agreed conclusion was that its two components, surface corvettes and submarines, both deserved American support. We recommended to both Secretary of Defense Caspar Weinberger and Minister of Defense Yitzhak Rabin that the corvettes be built in the United States, while Israel be permitted to use offshore procurement funds to acquire German-built submarines. Both ship types were to be built to Israeli specifications and equipped with Israeli systems. Secretary Weinberger agreed with our conclusions, as did Minister Rabin.

Within seven years Israel had launched its first Saar 5 corvette, and, bolstered by German financing, had begun the program that resulted in Israel’s acquisition of three submarines, named the Dolphin class. In 2006, Israel acquired three more upgraded versions of the Dolphin sub from Germany. The first of the three was commissioned in 2014, another earlier this year, and a third will be commissioned in 2018. The Israeli press has reported that these submarines carry nuclear-tipped missiles; as such, they would constitute a powerful deterrent to Iran or any other nation threatening the security, indeed the existence, of the Jewish State.

Israel’s procurement of these submarines has partially been funded by Germany. The remaining costs borne by Israel have in effect been subsidized by the U.S. taxpayer by virtue of the Offshore Procurement (OSP) program. This program, virtually unique to Israel, allows it to apply American foreign military assistance funding to projects of its own. Since money is fungible, the OSP funds offer Israel considerable flexibility in budget management, and enable its programmers and budgeteers to reallocate funds in order to free up resources for foreign purchases.

Ever since Caspar Weinberger blessed the submarine plan, its existence has never been the source of major controversy in Washington. Now, however, having so recently purchased three more submarines, Israel has reportedly contracted with Germany for yet another three. The deal has caused an outcry in Israel. Former Israeli Defense Minister Bogie Ya’alon has publicly stated that he had opposed the deal when it was proposed. It appears that the Chief of Staff of the Israeli Defense Forces was not aware of the deal either, nor, for that matter, was the Commander of the Israeli Navy. In their collective view, Israel required no new submarines for well over another decade; the money that the boats would cost could have more usefully applied to other programs.

Adding to the confusion surrounding the purchase, the Israeli press has reported that the deal was concluded by Prime Minister Benjamin Netanyahu’s private lawyer, who was also acting as an agent for the German shipbuilder. Moreover, the unanimous opposition of Israel’s defense leadership, and the fact that they were not informed it was taking place, has cast a further cloud over Prime Minister Netanyahu’s approval of the deal. The Prime Minister has asserted that Israel needed to complete the submarine purchase now, because Chancellor Angela Merkel is a good friend of the Jewish State, and some later successor might not be as willing to accommodate Israel’s needs. Yet Israel’s Dolphin fleet was acquired when Helmut Kohl, not Merkel, was chancellor, and there is no evidence that a future chancellor would necessarily block any additional German submarine sales to Israel.

It is not clear whether Washington was informed of Israel’s intentions regarding the submarine purchase. Certainly, there was no joint evaluation of the project similar to that which I led decades ago. Yet American offshore funding for Israel is as fungible as it has ever been, and the American taxpayer is effectively subsidizing this new round of submarine procurement. It may be too late for the Obama administration to do much about the Israeli submarine purchase, but the incoming Trump administration should insist that Israel not move ahead until the Pentagon, working in tandem with Israel’s Navy, has had a chance to review the new submarine program, especially since the IN itself has reservations about it.

The incoming Trump administration is committed to provide Israel unremitting support. But so too was the Reagan administration, in which I was serving when the previous Israeli submarine program was under consideration. “Support” during the Reagan presidency never meant a blank check; thirty years later, it should likewise not mean one when Donald Trump and his team take on the reins of governance early next year.

Dov S. Zakheim is vice chairman of the Center for the National Interest.