Donald Trump Should Take a Cue from 'No-Drama Obama' 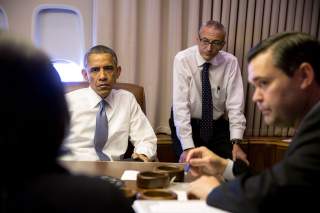 On the 2016 presidential campaign trail, President Barack Obama’s foreign policy came under severe criticism from multiple quarters. He was accused of being soft on China, giving a green light to Putin’s adventures in Ukraine and Syria, negotiating a poor nuclear deal with Iran, floundering in the Middle East in general. Philosophically, he was said not to understand American exceptionalism, to apologize excessively for the past mistakes of the United States, and to go wobbly in the use of force.

Some changes are overdue, it is true. On Syria, Libya and North Korea, in particular, the United States and its partners have been struggling mightily in their efforts to address terrorism, civil war and nuclear dangers.

But on dealing with the two most powerful and potentially threatening countries of all, Russia and China, President Obama leaves his successor with a much stronger strategic foundation than is commonly perceived. “No-drama Obama,” as he was nicknamed early in his presidency, had more wisdom about the virtues of patient, firm, yet quiet and non-escalatory ways of handling a resurgent Russia and a rising China than most other American politicians or strategists. It is important that his successor, and the new Congress, think twice before rushing to replace such approaches with much more muscular and confrontational strategies that could easily do more harm than good.

Russia and China are far from saintly; President Vladimir Putin in particular is petulant and ruthless. But the recent transgressions of these two great nations are relatively modest by the standards of revanchist powers throughout history. Russia has snatched parts of Ukraine and Georgia, and intervened in Syria. But the land grabs were modest in scale, and the Russian move into Syria occurred only after the United States and its allies had floundered there for more than four years. For its part, China has reclaimed three thousand acres of what were previously sandbars and small islands in the international waterways of the South China Sea, while positioning the occasional warship or coast guard vessel in a menacing way near various neighbors. But the reclaimed land was uninhabited, and the warships haven’t been firing shots in anger.

None of this behavior is good; none is benign. Small aggressions could foreshadow larger and bloodier ones. But it is far from clear that the best way to address these recent dynamics is to get in the face of President Xi Jinping of China or President Putin.

The United States should not, of course, let Russia and China simply have their way in these faraway lands. That would be unfair to other countries and their interests, and deleterious to the integrity of the international order. But under Obama, the United States has not simply stood by. Although his administration was sometimes too slow to act, it ultimately did what was most clearly needed in each place—without overdoing it, given that no American territory, allied commitments or core national interests were directly threatened.

Obama worked with the European Union to place targeted sanctions on Russia that, along with recent falls in global oil prices, have put that country into a two-year recession. Putin may not care in the short term, but he ignores this economic trend at his own political peril. Meanwhile, a simmering conflict continues in eastern Ukraine, but it has not escalated or expanded for roughly two years. And Obama, through this past summer’s Warsaw Summit, led a decision by NATO to shore up the alliance’s commitment to all of its eastern member states, including Estonia, Latvia, Lithuania and Poland. NATO is now deploying several thousand troops spearheaded by American contingents to this key region. Whether one favored NATO expansion in the first place or not, it is of paramount importance that the United States and other allies leave no doubt in anyone’s mind about NATO’s core promise and purpose—that an attack on one member is an attack on all. Obama has signaled that loud and clear.

In regard to China and specifically the South China Sea, Obama has firmly sustained two core principles. One is freedom of navigation in the open seas. To demonstrate its resolve, the United States has used Navy ships to conduct freedom of navigation exercises near islands and rocks that China claims, in places China would prefer we not sail. The second fundamental principle is that force must not be used to settle disputes. China has indeed been strong-arming and intimidating people. But it has not been shooting them or invading their main territories.

It is true that Obama’s “Russia reset” policy largely failed—just as President Bush’s effort to see into Vladimir Putin’s soul and find a man he could work also foundered. Under Bush, Putin invaded Georgia; under Obama, he grabbed Crimea and stirred up conflict in eastern Ukraine. I fault Putin more than either Bush or Obama for these unfortunate outcomes. It is also true, for example, that China’s military budget doubled under Obama, from about $100 billion a year to $200 billion. But it had also doubled under Bush (from about $50 billion to $100 billion). But calm, calculated, proportionate responses are a far more sober way to handle the kinds of disputes we have had of late with these two potentially dangerous countries than any alternative. We have lots to fix in American foreign policy, to be sure. But some strong foundations are in place for the forty-fifth president and 115th Congress to build upon, as well.