Donald Trump and the Art of Foreign-Policy Bluffing 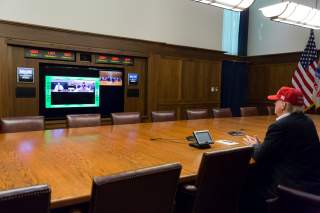 Trump firmly believes (it is difficult to complete a sentence that starts with these words) in the value of bluffing. He embarrassed himself after bluffing that he may have tapes about his meeting with then FBI Director James Comey and when he floated firing Special Counsel Robert Mueller. Neither yielded an inch. The president claimed to be “100 percent willing” to testify under oath with respect to his interactions with Comey and the allegations of obstruction of justice that followed. Nobody believed these words. Indeed, we are still waiting.

As the North Korea nuclear threat is whizzing toward a point of decision, Trump needs China to take the extra step of cutting off oil supplies to Pyongyang, which could change the dynamics of this perilous situation. To spur Beijing, Trump’s most recent gambit is to announce via tweet that the United States might cut off trade with all nations that do business with North Korea, a threat widely understood as aimed at China, North Korea’s only major trading partner. However, given the size of U.S.-China trade (some $650 billion in 2016, with China as Washington’s third largest export market) and the many millions of American jobs potentially affected, it is all too obvious that Trump is not only bluffing, but is doing so incompetently.

After all, what distinguishes a bluff from hollow bluster is a mask of plausibility. So if a head of state is trying to coerce with threats, hoping to get his way without actually having to carry them out, the threats must be credible. Trump’s are not, and each new transparent bluff all but ensures future threats by him won’t be taken seriously. No wonder North Korea is not much impressed by Trump’s “fire and fury.”

What Trump needs from China is a big ask. Indeed, altering the status quo in North Korea carries great risk for President Xi, who is worried about a flood of millions of malnourished North Korean refugees, the advance of U.S. troops from South Korea to the Chinese border, and a perceived political misstep just ahead of the Nineteenth Communist Party Congress this fall. Yet Trump has acted as if the international system operates according to country club etiquette, where you ask a fellow club member for help—it is not nice to refuse. He tried sending flattery Xi’s way: “I have great respect for him. I have great respect for China. I would not be at all surprised if we did something that would be very dramatic and good for both countries and I hope so.” With little progress yielded from these kinds of gestures, the United States has more recently moved to impose sanctions on Chinese individuals and firms that trade with North Korea. However, sanctions at best work over the longer run, and the North Korea crisis is ramping up quickly.

A big ask calls for a big give. The administration ought to try carrots before sticks. Indeed, there are major Chinese concerns that Washington could address at a surprisingly low cost. I have written recently about the destabilizing nature of the THAAD anti-missile batteries the United States has recently installed in South Korea. China is concerned that the THAAD radar would give the United States advance notice of Chinese military operations, hindering China’s ability to retaliate to an attack. The United States could offer its removal if Beijing helps to defang North Korea’s nuclear program. Further, the United States could commit to not positioning its forces on the Chinese border, even if the two Koreas unite. The United States could even agree to stop the almost daily surveillance flights that it is conducting up and down the Chinese coastlines, a practice that aggravates Beijing and produces little useful intelligence.

Other carrots can be considered. To ask China to get North Korea to agree to curb its nuclear program is asking a great deal. Why not provide commensurate incentives? If they fail, there is still time to go negative. And if the time for threats does come, Trump had better not be bluffing.

Amitai Etzioni is a University Professor and professor of international relations at The George Washington University. He is the author of Avoiding War with China, just published by University of Virginia Press. Follow his work on Facebook, Twitter and YouTube.