Donald Trump vs. Barack Obama for the White House: Who Would Have Won? 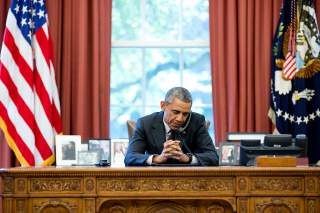 After weeks of statewide recounts and pleading with members of the Electoral College failed to change who did win the 2016 presidential election, we have shifted to debating who might have won it.

President Barack Obama left no doubt where he stood, telling longtime aide David Axelrod’s podcast that he could have secured a third term if he had wanted (and the Constitution allowed) one. He expressed continued faith in his message of “hope and change.”

"I am confident in this vision because I'm confident that if I had run again and articulated it, I think I could've mobilized a majority of the American people to rally behind it," Obama said.

Naturally, President-elect Donald Trump took to Twitter to proclaim himself equally confident that he would have beaten Obama just like Hillary Clinton.

“President Obama said that he thinks he would have won against me,” Trump tweeted. “He should say that but I say NO WAY!—jobs leaving, ISIS, OCare, etc.”

It’s not surprising Obama and Trump feel this way. Obama did, in fact, win two terms as president on some version of his message. Trump just won, albeit without the same clear popular vote endorsement, running against Obama’s failures as president.

The reasons for Obama’s bullishness are more obvious. His approval rating rebounded sharply during the campaign. He has for months been more popular than either Trump or Clinton. Trump in particular has a narrow appeal, although broader than a generic Republican’s in the states where he needed it most.

Obama almost certainly would have avoided the drop in black voter turnout that plagued Clinton. He also stood to outperform her among millennials. Bernie Sanders’ supporters in the Democratic nomination contest were many of his white primary voters, if they were of age in 2008.

But at least some of Obama’s gains in popularity stemmed from the fact he was able to remain above the fray. He stayed out of the Democratic primaries until Clinton had all but clinched on her own, even if it was apparent to the discerning that he preferred his former secretary of state to Sanders.

The president only weighed into the unwieldy Republican nomination process from time to time to ridicule the 17 candidates and their reality TV show ringleader, much like a television host himself. To Republicans, Obama was a radical and a failure. To swing voters, he was Jon Stewart or Trevor Noah.

Most importantly, Obama wasn’t a candidate in the messy general election. Majorities disliked both candidates. It is not, however, certain that he could have avoided this fate if he was a combatant in one of the ugliest campaigns on record, perhaps the worst of the television era.

In particular, Obama was vulnerable to Clinton’s collapse among white working-class voters. This demographic turned out to be more important in competitive states than millennials or college-educated white voters. And while Obama did well enough with them in 2008 and 2012, they’d preferred Clinton in the Democratic primaries eight years ago.

Mitt Romney ran as the candidate who could repel these voters, with the significant and perhaps prophetic exception of those in coal country. Obama, the New York Times’s Nate Cohn observed, “would have won Michigan, Ohio and Wisconsin each time even if Detroit, Cleveland and Milwaukee had been severed from their states and cast adrift into the Great Lakes.”

Not so Clinton and arguably not so Obama ’16. Trump had the better argument on immigration, trade and manufacturing than Romney or John McCain. He even got the better of Clinton on these crucial issues. Trump did so in part because Obama failed to deliver with these voters.

The swing of white, Midwestern voters would likely have still happened for Trump. The decline in the black vote probably wouldn’t have happened to Obama. Aside from some Jill Stein votes potentially going to Obama, much else might have happened in noncompetitive states.

Within those basic demographic realities, it’s possible that “No Drama Obama” would have been much more effective in portraying Trump as unpresidential to elect than Clinton was. Yet it is also plausible that Trump might have made Obama look like Michael Dukakis refusing to get angry in response to get a debate question about the hypothetical rape and murder of his wife.

“Say what you will about Donald Trump, he cares,” writes Washington Post columnist Richard Cohen. “He cares about things I don’t, and he has some awful ideas, and he is an amoral man in so many ways. But, in contrast to Obama, his emotions are no mystery.”

Cohen makes these points in the service of a tired liberal hawkishness I think is mostly wrong on both the substance and the politics (Trump wanted to make America great again, but he was pretty explicit that didn’t entail being a great policeman of the world).

But the basic emotional thrust of his argument is right: uncharacteristic of a Republican, Trump managed to convince enough voters he felt their pain, Bill Clinton-style, while the Democrats were indifferent to it.

Hillary Clinton seemed coolly indifferent to their plight, even if she kept insisting we were stronger together (she didn’t think we were stronger with deplorables). Obama projected an even greater coolness and while he would have stood a better chance than Clinton, it might have cost him too.