Donald Trump vs. Hillary Clinton: Who Won the Big Debate? 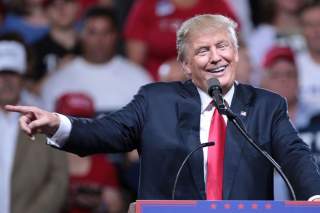 There was a moment during the 2000 town-hall debate when Al Gore apparently decided he’d had enough of George W. Bush. Gore stood up and loped over to the Texas governor until the two were standing only a couple inches apart. Bush, in the middle of an answer, gave Gore a jocular nod, the audience chuckled with laughter, and the nation was left wondering whether it had almost witnessed presidential fisticuffs.

Until last night, Gore’s Frankenstein lunge was the gold standard of controversy for the town-hall forum, where audiences of undecided voters keep even the most pugnacious presidential candidates on their best-ish behavior. So what in the world are we to make of Donald Trump’s performance? You needed a cigarette by the time it was over. The billionaire mogul was engrossingly and at times uncomfortably aggressive, unleashing every fury he had against Hillary Clinton in retaliation for a week that’s been rough even by his recent standards.

Trump knew he had a daunting hurdle to overcome in the recently released video that showed him making abhorrent and lascivious comments about women back in 2005. And he cleared it, both because Clinton is a weak prosecutor and because he squashed the issue in a bum-rush against her illegal email server. Among many firsts achieved last night was Trump’s promise to appoint a special prosecutor to investigate his adversary, and when Clinton lassoed her own ankles by warning about President Trump in “charge of the law in our country,” the billionaire yanked as strongly as he could: “Because you’d be in jail.” Cue a disclaimer from pollster Frank Luntz that his focus group was far more concerned with the emails than Trump’s scandal—public corruption > private boorishness.

That Trump managed to effectively shift attention from the video back onto a months-old Clinton controversy might in itself have won him the debate. But he was too transparently angry to stop there: almost every one of his answers turned into a blistering attack on Clinton, and none so adroitly as when he fielded a question about the Khan family by noting that Clinton supported the war in Iraq that killed their son. He seethed and interrupted and attacked the moderators for treating him unfairly (which they did.) He was cavalier in his grumpiness, something rarely seen in our image-shaped politics now that Barney Frank is out of office.

There was little consistency to Trump’s performance, and little proffered evidence that he’d be a competent Oval Office caretaker. Instead, he eschewed being presidential in favor of acting as a high-voltage cipher of middle-American anger at the ruling class. This was best illustrated when he was asked about a New York Times report that he claimed a massive loss in 1995 to avoid paying income taxes. Trump said, “Of course I do. And so do all of her donors, or most of her donors,” and segued into a tirade against Clinton’s hobnobbing with elites like Warren Buffett and George Soros, a potent image in this year of populist rage.

As the debate wore on and the novelty of Trump’s attacks wore off, Clinton improved—her answer about the Supreme Court bested Trump’s, and when asked about her notorious comment that many Trump supporters were a “basket of deplorables,” she pivoted perfectly back to her opponent’s history of controversial insults. She also sounded better informed on foreign policy, even if it was just gloss: how she intends to set up no-fly zones and safe zones in Syria while also honoring her commitment to “not use American ground forces” is beyond me. Military experts say it’s impossible.

Who won the second presidential debate? That depends on the condition of the viewer. If he’s still in a “les deplorables” mood, irate at the aristocracy and looking to tip over a few carriages, then Trump’s puncturing of Clinton’s bubble was an irresistible indulgence. But if he’s past that point now and looking for a Merkel-esque steady set of hands, then he found them with Clinton. Either way, Al Gore should feel assuaged: after last night, his creepy encroachment on Bush can be cut out of the highlight reel.