Is Donald Trump Vulnerable to a Primary Challenge? 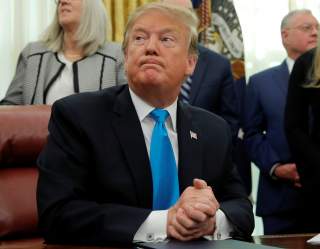 Bill Weld? John Kasich? Larry Hogan? These are just some of the names being floated as potential primary challengers to President Donald Trump, with Weld recently becoming the first candidate to formally establish an exploratory committee to examine the prospects of a presidential bid. It doesn’t take a clairvoyant to say with some confidence that none of these candidates—talented though they might be—are likely to unseat Trump as the Republican nominee in 2020. But that doesn’t mean a primary challenge would be pointless.

Two incumbent Republican presidents have faced significant primary challenges since the use of primaries became widespread: Gerald Ford in 1976 and George H.W. Bush in 1992. Both presidents managed to secure the GOP nomination despite these challenges to their authority (albeit barely, in Ford’s case) and thereby advance into the ensuing general election. And although Ford and Bush faced drastically different sets of circumstances, their combined experiences help to show what a challenger to Trump might hope to achieve by running.

Ford’s problem as president was that he lacked legitimacy. He was an unelected (“accidental”) president, having been appointed vice president to Richard Nixon in December 1973 and assuming the presidency just eight months later in the wake of Nixon’s ignominious resignation, taking office at a time when faith in the presidency was at an historic low. This meant that neither the Republican Party nor the country at large had been given a proper chance to endorse Ford.

Making matters worse, Ford inherited a torrid economic situation from Nixon and, as a result of Congressional arm-twisting, was forced to preside over a hurried and inglorious end to U.S. participation in the Vietnam War. Through it all, and despite not having played any role in it, Ford remained badly tarnished by the Watergate scandal—a problem magnified by his controversial decision to pardon Nixon.

It was against this backdrop that former California governor Ronald Reagan chose to run against Ford in the 1976 primary contest, coming tantalizingly close to unseating Ford and winning the GOP nomination for himself. Reagan seized eleven of the states in which primaries were held (Ford won seventeen) and went into the convention trailing Ford by just forty-three pledged delegates, marking the last time that either party went into its nominating convention with the outcome seriously in doubt. In the event, Ford beat Reagan by just 117 votes (5 percent of all votes cast).

In 1992, George H.W. Bush was in a much stronger domestic position than Ford had been in 1976. Bush had won the 1988 election by a landslide, having just served two terms as vice president to Reagan. And for the first three years of his presidency, Bush enjoyed sky-high approval ratings, especially in the immediate aftermath the First Gulf War. Bush’s legitimacy, respectability, electability, and leadership abilities were about as close to being “beyond reproach” as is possible in U.S. politics.

That Pat Buchanan, a former Reagan White House official and outspoken social conservative, decided to launch a primary challenge against Bush, therefore, had little to do with any realistic expectation of victory. Even when Buchanan shocked pundits by taking over 37 percent of the vote in the New Hampshire primary, few believed that the challenger would succeed in defeating the sitting president.

But still Buchanan soldiered on. He contested primary after primary and, as late as April 1992, was running a strong enough campaign to secure nearly a quarter of the vote in Pennsylvania. By the time all was said and done, Buchanan had garnered the support of around 23 percent of Republican primary voters, establishing beyond a doubt that the social conservative wing of the GOP was an electoral force to be reckoned with—or, more to the point, to be catered to.

Like Reagan in 1972, Buchanan failed in his bid to replace the sitting president. In fact, he did not come anywhere near as close. But by running such a confident and uncompromising campaign—one to which nearly a quarter of Republican primary-goers were willing to lend their vote—Buchanan won himself the right to help set the party’s agenda. He delivered an explosive opening night speech at the 1992 convention, for example, in which he drew attention to an ongoing “cultural war” between liberals and conservatives (“as critical to the kind of nation we will one day be as was the Cold War itself”).

Buchanan’s ideas, style, and rhetoric continue to influence the Republican Party today—much more so, perhaps, than do the ideas, style, and rhetoric of politicians in the mold of George H.W. Bush. Indeed, one need look no further than President Trump himself to find a Republican who routinely echoes the ideas put forward by Buchanan in 1992: from protectionist trade policies to a restrictive line on immigration to the slogan of “America First.” Judged in this light, Buchanan’s ostensibly unsuccessful bid for the GOP nomination was, properly understood, a defining moment in the evolution of the contemporary Republican Party.

What can Weld, Kasich, Hogan, et al. learn from the experience of Reagan and Buchanan? The main lesson, perhaps, is that they will not succeed in the short-term. Ford in 1976 was in a far weaker position than Trump is today, but even he managed to fend off a formidable opponent like Ronald Reagan. Too few party officials and not enough voters will throw their weight behind an insurgent challenger when there is a sitting president asking for their support. But the lesson of Pat Buchanan’s 1992 campaign is that a primary challenge could still achieve important things.

Indeed, whereas nobody should expect a primary challenge to Trump on the scale faced by Ford, a contest of the scale faced by Bush is at least possible—especially if the economy experiences a downturn in the next two years (as it did during Bush’s tenure). Such a contest would be headline-grabbing, informative, and eminently capable of shaping the Republican Party over the long-term—even if it never came close to achieving the goal of depriving Trump the 2020 nomination.

If Weld, Kasich, Hogan, or some other candidate could launch a campaign in the mold of Pat Buchanan then they could gain for themselves (and their supporters) a lasting say over what conservatism is, what the GOP stands for, and how America should be governed—albeit from the center of the party this time, not its radical right. If they announce during the first half of this year, then they could have a whole year to make their case.

For while the President’s supporters often point to his rock-solid approval among Republican voters as a reason why he is invulnerable to internal challenges, it is worth remembering that George H.W. Bush looked unassailable for large chunks of his presidency. But Bush’s impressive poll numbers did not stop Buchanan’s 1992 campaign from thundering well into the summer (and peeling off nearly a quarter of GOP voters in the process).

One key difference that separates today’s politics from those of 1976 and 1992 is the concept of a loyal opposition. After losing to Ford, Reagan backed the president and campaigned for his reelection. He never sought to sully Ford’s personal reputation. Even Buchanan ultimately endorsed President Bush and urged the “Buchanan brigades” to get behind the party’s nominee.

Today, it is inconceivable that Trump would tolerate any dissent. Challenges to his grip on the Republican Party will be met with derision, insults, and ugliness. If a primary challenge turns into a long and drawn-out affair, it could well become destructive to both sides. Even the spectacle of an internecine absurdity would be a useful outcome of a primary challenge, however, because it would lay bare for Republicans the extent to which their party is now a creature of Donald J. Trump and invite them to have a say on that state of affairs.

Is the Republican Party still anything resembling a big tent? Is it a party that can debate ideas in a serious fashion? Or is it a vehicle solely for the advancement of Trump’s political agenda? It would be good for voters to find out.