Donald Trump Was No Champion of Foreign Policy Restraint 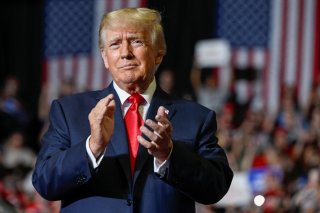 Last week, columnist Josh Rogin wrote in The Washington Post that the Heritage Foundation, one of Washington, DC’s most prominent conservative think tanks, has drifted away from its neoconservative roots, instead favoring the foreign policy of “the new right.”

In the headline of his column, Rogin suggests that this change in policy is a shift from the GOP leadership of yesterday and “toward [Donald] Trump.” Given the evidence presented in the piece—it is almost wholly centered on Heritage Action’s (the think tank’s political arm) opposition to the May bill that provided $40 billion in aid to Ukraine—that could indeed be true. But Rogin’s lament that Heritage’s new approach might mean that the GOP has “become the party of foreign policy ‘restraint’” directly conflates Trumpism with restraint. By doing so, he muddles what is in fact a more complicated discussion.

Perhaps Rogin called Heritage’s new direction on foreign policy one of “restraint” to mirror the formulation of Heritage president Kevin Roberts. But as restraint has made some inroads in DC over the last few years, its opponents have tended to criticize the movement with lazy labels such as “isolationism,” or have attempted to conflate it with Trumpism, since any policy associated with the former president tends to be treated as unserious, if not discredited, in the nation’s capital.

But calling Trump’s foreign policy one of “restraint” hardly stands up to scrutiny. During his four years in office, Trump’s cabinet and advisers included Nikki Haley, Mike Pompeo, H.R. McMaster, and John Bolton, none of whom will ever be confused for restrainers. His administration accelerated the U.S.-China rivalry, blustered about American military strength, and reportedly considered launching wars in Iran and Venezuela. Trump’s policies often eschewed diplomacy and humility in favor of militarism and provocation.

Yet Trump also explicitly opposed some of the groupthink from necons and liberal internationalists and, through his antagonism for this establishment, occasionally landed on some restraint-friendly rhetoric, especially surrounding the withdrawal from Afghanistan and the importance of burden sharing.

The question of aid to Ukraine, which Heritage, and other national conservatives, opposed, has been subject to a degree of disagreement among self-described restrainers, and is not necessarily the best litmus test to determine where someone stands on larger foreign policy questions.

For example, by and large, Trump and the intellectual movement with which he is associated have argued against expending U.S. resources in places like the greater Middle East and Europe because they are best spent on the coming civilizational clash with China. It appears as if Heritage, too, has adopted this frame. But on the question of competition with China, nationalists may have more in common with neoconservatives than they do with restrainers. As Daniel Larison, who often labeled Trump “the anti-restraint president” wrote last week, “Exercising restraint elsewhere but then abandoning it when it comes to China policy makes no sense. It is in managing relations with other major powers, especially nuclear-armed major powers, that restraint is most necessary and valuable.”

If nothing else, recent developments indicate that neoconservatism may no longer have as large a base among Republican voters, even as prominent voices in government, think tanks, and mainstream media continue to advocate for that ideology. In looking to appeal to a changing base, it is possible that the Heritage Foundation has decided to advocate for a more Trumpian philosophy. But that doesn’t mean that it is embracing restraint.