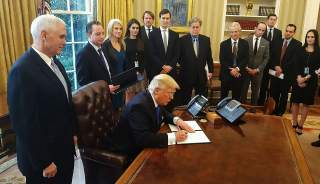 Before he gets more deeply involved in Syria’s civil war, Donald Trump will have to win one at home. The Republican Party was already divided after failing to repeal Obamacare. Now the conflict has spread to the White House, where Steve Bannon and Jared Kushner are at daggers drawn. Even Trump’s most loyal grassroots and media supporters are in an uproar over the president’s evolving foreign policy, which has taken a turn toward the establishment as his domestic agenda sinks into the swamp he promised to drain.

How much damage has the Syrian attack done to Trump? He’s lost Ann Coulter, who took to Twitter to vent her outrage and retweet lesser-known supporters who felt equally betrayed. He’s lost Justin Raimondo of Antiwar.com and the sizable blocs of Ron Paul and Pat Buchanan activists who had flocked to Trump’s “America First” banner. He’s even lost InfoWars, whose readers are overwhelmingly against the attacks, to judge from the site’s self-polling and user comments. Commenters at Breitbart.com are not less outraged over Trump’s move.

The president has lost his base, or is in grave danger of doing so. But he has also picked up new support: from John McCain, Lindsey Graham, and Bill Kristol, all of whom praised the airstrike on Syria. Neoconservatism is suddenly back in fashion at the White House, or so it seems.

Trump’s supporters had been growing restive over a litany of setbacks and reversals even before this. The president’s executive order to restrict immigration from countries with active Islamist revolutionaries has bogged down in the courts. Obamacare repeal turned into a fiasco, with the White House getting behind an unpopular plan that neither conservatives nor right-wing populists could get behind. Bannon, the tribune of the right-wing populists, appears to be losing ground by the day in the White House’s internal battles. Word that Reince Priebus may soon be replaced as chief of staff by a more moderate Washington insider led Laura Ingraham to quip on Twitter, “Trump is going into the Swamp he promised to drain for his new Chief-of-Staff.” (A former chief of staff to Sen. Arlen Specter is among those being considered)

It’s Bannon whose dismissal would be a real call to arms for the right, however. Only anonymous sources have been willing to speak to the press about Bannon’s reputed power struggle with Trump’s son in law, Jared Kushner. But outside the White House, establishment Republicans have started to go on the record calling for Bannon’s removal. Politico notes that Rep. Ileana Ros-Lehtinen has told a Miami radio station that Bannon’s downfall “would be welcome news for the nation.” She predicts “his days are numbered in that administration. And I think profound changes will be coming.”

This is the springtime of Republicans’ discontent. The failure of Trump’s opening gambits in his first 100 days in office has created an opening for the establishment he vanquished during last year’s election to come to his rescue now: at least, that’s how they would tell it.

Neoconservatives, in particular, have always been prepared to work with the personnel at hand: Kristol preferred John McCain as the Republican nominee in 2000, but he was glad to accept George W. Bush, especially once Bush placed Dick Cheney on the ticket. There are a lot of lesser-known Dick Cheneys ready to join the Trump administration just as soon as the “Nationalists” or “Bannonites”—as the supposed Kushner faction is said to call them—are gone.

There are precedents for this: in 1980, right-wing conservatives from the West and South expected to staff the Reagan administration. They swiftly lost out to people they called the “Eastern Establishment” and to rising neoconservatives such as William Bennett, who was picked to head the National Endowment for the Humanities over the favored right-wing candidate, a University of Dallas professor of literature named M.E. Bradford. The “conservative wars” that have flared up from the 1990s to today have their roots in what the right experienced a betrayal of the Reagan Revolution. Reagan was personally popular enough with his own base, and with the whole country, that such conflicts didn’t cost him re-election. But they did create splits that ultimate crippled George H.W. Bush in the 1992 primaries, when the right produced a challenger in the form of Pat Buchanan.

Trump does not have the same margin of safety—or any margin. He is the least popular of any president in modern times at this point in his administration. But he endured plenty of bad polls in the primaries and general election last year as long as his core activists and supporters stood by him, and those same voters have been steadfast during these troubled first 11 weeks. Trump would be well-served if he could expand his base of support. But demolishing his existing base and replacing it with one that appeals to Bill Kristol or John McCain does not seem like a smart political move. Even the less overtly neoconservative Republican brand represented by Paul Ryan proved to be politically leaden when Romney and Ryan shared a ticket in 2012. The neocons and the new center-right establishment were the winners of the old Republican civil war—but they never did stamp out the opposition, and they had the hardest of times winning national elections.

Trump promised a new direction for the party and the right. He has loyally given orthodox conservative Republicans what they want, including, in Neil Gorsuch, a Supreme Court justice who is, if anything, rather critical of the Trump style of politics. Tax cuts are high on Trump’s agenda, and he has already begun scaling back regulations. Even in foreign policy, he has offered a much bigger military budget and has taken few active steps to change America’s alliance structure. The trade-off for these concessions to the orthodox Republican center-right, however, was expected to be that Trump’s populist right would get immigration restriction, a measure of economic nationalism, and no more humanitarian or nation-building wars. It’s that part of his agenda, the part that appeals to his base, that Trump is having a hard time delivering. And in the case of foreign policy, if the Syria attack is a portent of things to come, he may no longer have any intention of delivering what the base demands.

Trump is not wrong, on pragmatic or ideological grounds, to seek experienced personnel for his administration or to reshuffle roles if the current line-up is too fractious or unable to get policies enacted. And even as he launches a more symbolic than substantive strike against Syria, his secretary of state indicates that ISIS, and not Assad, remains the Trump administration’s primary target in the Middle East. The friction of the moment does not mean that the Trump revolution is about to turn into the McCain-Ryan-Kristol counterrevolution. But for the right, it is a moment of great danger and anxiety.

The president has a clearly difficult task ahead. He has to unite and lead some all-but-irreconcilable elements in the Republican Party. The task calls for great creativity and confidence. It also calls for prudent loyalty, however. He can keep his base while adding to it, if he is deft. On the campaign trail last year, he displayed remarkable instincts for building up his support even as he fought and won battles the establishment insisted were unwinnable—such as condemning Jeb Bush for his brother’s war in Iraq. Trump needs the same sort of sangfroid now. He can be a moderate, as well as a populist and a conservative, without becoming a president that Bill Kristol can applaud. To do it, he and his staff just have to keep their focus on the interests of the nation.