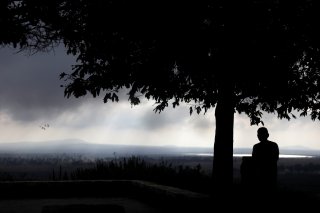 In the most recent policy announcement from the White House (read: afternoon tweet), President Donald Trump said the United States would recognize Israeli sovereignty over previously occupied Syrian territory. Trump stated in a tweet: “After 52 years it is time for the United States to fully recognize Israel’s Sovereignty over the Golan Heights, which is of critical strategic and security importance to the State of Israel and Regional Stability!”

The Golan Heights is a plateau in the Levant, rising high above the surrounding area. From the top you can almost see the Mediterranean, and it’s only a taxi ride away from the Syrian capital of Damascus. Combined with its abundant natural resources like water, the Golan is one of the most important strategic locations in the area.

A sizable portion of the local population, mostly Syrian Druze, were expelled after the 1967 war and in the decades since have been replaced by Jewish settlements. The Golan Heights was officially annexed by Israel in 1981, an action that was repudiated by the international community. “[T]he Israeli decision to impose its laws, jurisdiction and administration in the occupied Syrian Golan Heights is null and void and without international legal effect,” said United Nations Security Council Resolution 497, which sought to reaffirm “that the acquisition of territory by force is inadmissible, in accordance with the Charter of the United Nations, the principles of international law and relevant Security Council resolutions.”

“This is a long overdue statement by a U.S. president,” said Jonathan Schanzer, senior vice president for research at the Foundation for Defense of Democracies. Schanzer has been favoring U.S. recognition of the Isreali annexation for several years. “It is impossible to imagine the Israelis handing over this territory to Syria, especially now, with Syria in utter disarray, and after years of Assad regime atrocities.”

“Palestinians have no faith in Trump’s policies, and his latest statement regarding the Golan Heights will shock no one, neither in Ramallah, nor in Gaza,” said Palestinian-American journalist Ramzy Baroud. “If there was ever any doubt that Trump has abandoned, not just international law, but even Washington’s core political strategy, which for decades was anchored around the ‘peace process’ and the ‘two-state solution,’ these doubts evaporated over the course of the last year.”

“This move will not have an impact on Palestinian-Israeli negotiations. The Golan is not contested by the Palestinians. It is a Syria-Israel issue. Although the Palestinians are bound to protest any concession granted to the Israelis from the United States,” Schanzer to the National Interest.

Baroud disagrees, believing this is one part of a much-wider strategy to implement the Jared Kushner championed “deal of the century.” “It is important to note that the ‘deal of the century’ is not entirely an American invention, but rather an Israeli-American stratagem aimed at fundamentally altering U.S. foreign policy by removing any obstacles before the Netanyahu government’s colonial project in the West Bank, Jerusalem and the Golan Heights,” he told the National Interest.

The action is being justified by members of the U.S. government as a response to Iranian forces based in Syria, invited there by the government in Damascus to aid them in the Syrian Civil War. “To allow Golan Heights to be controlled by the likes of the Syrian or Iranian regimes would turn a blind eye to the atrocities of Assad and the destabilizing presence of Iran in the region. Strengthening Israel’s security enhances our ability to fight common threats together,” tweeted National Security Advisor John Bolton.

“We should support Israel[i] sovereignty over Golan. Assad allows Iran & Hezbollah to operate with impunity in southern Syria. If Assad got ahold of Golan they would operate against Israel from there too. Israel needs that buffer to be permanent,” agreed Florida Sen. Marco Rubio.

Schanzer told the National Interest that it’ll be important to gauge Iran’s reaction. “One thing to watch right now is whether Iran responds to this move by provoking Israel from its military installations in Syria. This theater has seen repeated provocations by Iran and responses by Israel. It’s hard to imagine that Iran will let this slide.”

Israeli prime minister Benjamin Netanyahu was happy to hear Trump’s decision and used similar language in a tweet. This move to recognize the Golan as Israeli territory is a historical departure for the Likud Party, whose intellectual founder Ze’ev Jabotinsky and first Prime Minister Menachem Begin were more focused on controlling the West Bank. “Jabotinsky’s ideology was geographical: ‘Eretz Israel on both sides of the Jordan.’ The map did not include the Sinai Peninsula, so Begin had no qualms about giving it back to Egypt [in 1979]. It also did not include the Golan Heights, which Begin would have returned to Syria without hesitation,” theorized the late Israeli journalist Uri Avnery.

Despite the break with previous party orthodoxy, the recognition will most likely help Netanyahu has he approaches the Israel legislative elections taking place in a few weeks. “It will undoubtedly be viewed by some—if not many—as a shot in the arm for Benjamin Netanyahu and his Likud party as they engage in a hard-fought battle against Benny Gantz and his Blue and White Party. Interestingly, one of Blue and White’s key candidates, Yair Lapid, has been looking for support on this issue in Washington for many months. He is undoubtedly pleased. Still, it might have been prudent for the president to wait until after the April 9 elections, before tweeting,” said Schanzer.

Baroud believes that the timing of the tweet makes sense, since it will aid Netanyahu’s reelection and increase the odds that Kushner’s deal with be successful. “For the ‘deal’ to be achieved, it is essential, then that Netanyahu remains in power. However, the news from Israel indicates that Netanyahu, for once, is facing real competition. If Netanyahu’s right-wing coalition suffers a defeat next April, a central government or a central-left alternative would complicate the scene for Kushner, resulting in unwanted delays or, worse, scrapping the ‘deal’ altogether. Thus, Trump’s announcement regarding the Golan is intended mostly for Israeli audiences, and it will likely be registered as another ‘achievement’ for the embattled Israeli Prime Minister.”

Baroud concluded that the succession of events over the past year is meant to send two messages, “the first to Palestinians, that you have been dropped off the U.S. radar entirely, and to Israelis, elect Netanyahu and you will have complete and unconditional U.S. support.”