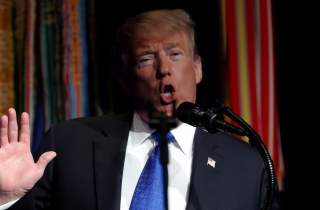 Missile defense is the longest running scam in the history of the Department of Defense. The new Missile Defense Review continues that proud tradition.

It scares us with warnings of “more than 20 nations with missile technology” when there are really only three nations we have to worry about: Russia, China and North Korea. It promises a near-perfect “shield,” but offers very little in specific, workable programs. Worse, the review and the inflated rhetoric around its release worsen the very problem it claims to solve: an uncontrolled new arms race.

I have boxes of Congressional testimony in my office from Pentagon officials who solemnly swore in the 1980s that they had “promising,” “cost-effective,” “new” technologies that would soon give the United States the ability—as President Donald Trump claimed on Thursday—“to terminate any missile launches from hostile powers . . . regardless of the missile type or geographic origins of the attack.”

True believers have long held out that goal for missile defense. It has proven impossible to achieve. Instead they have left behind a legacy of inflated threats, lofty promises, and grandiose plans followed by the deployment of quite limited and flawed defensive systems.

President Ronald Reagan began this tradition with his launch of the famous “Star Wars” program on March 23, 1983. Ten years later, after spending tens of billions of dollars on X-ray lasers, directed energy weapons, particle-beam weapons, space-based kinetic interceptors and “brilliant pebbles,” the Pentagon was forced to conclude that none of these fanciful concepts would work. We ended up with a concept of limited, ground-based interceptors that might be able to intercept one or two primitive long-range warheads.

Since then, we have concentrated largely on defenses against short- and medium-range missiles traveling under three thousand kilometers or so. These can work. The THAAD and Aegis programs have had fairly good test results. The review would take the Aegis, in particular, and try to morph it into a system that could hit ICBMs. That is unlikely to be successful, but it is not crazy to explore the possibility.

The review would add new radars and another twenty ground-based interceptors to the only long-range intercept system now deployed, the Ground-based Missile Defense System. That could be good, because at least thirty-four of the forty-four interceptors now deployed are thought to have faulty circuit boards that likely will cause the interceptors to miss their targets, according to a Los Angeles Times investigation. But the system itself has a very poor test record. Even under ideal conditions, it has succeeded in a “hit to kill” in only 40 percent of the last ten tests. And none of these tests have included the kind of realistic counter-measures and decoys the interceptors would have to overcome in real combat.

These modest steps could be seen as a sign of failure on the part of the review’s authors, who clearly wanted something more ambitious. What they lack in real programs, though, they make up for in new objectives. This is the great danger of this review. It opens the door to impossible new goals, changing the program from one designed to hit a few missiles from a small nation to one designed to defeat all missiles from all nations.

Trump proclaimed: “Our goal is simple: to detect and destroy any missile launched against the United States anywhere, any time.” Simple to say, perhaps, but impossible to do.

Today, after spending over $300 billion on missile defense programs since 1983, we have the ability to try to defend against short- and medium-range ballistic missiles and a limited capability to engage and perhaps hit a few primitive long-range missiles (if the enemy cooperates by not deploying countermeasures). Expanding that to a global, perfect defense system is undoable and unaffordable.

It would cost trillions of dollars to develop and deploy the space-, air-, sea- and land-based systems envisioned by Trump and this review. For example, there are roughly two thousand active satellites from all nations in orbit today. A 2012 National Academies study estimated that even an “austere and limited-capability” space-based missile defense system to defend against a handful of North Korean missiles would require 650 new satellites at a cost of $300 billion. Scaling that up to a global system would mean, according to a 2003 American Physical Society study, a constellation of at least 1,600 weaponized satellites in order to have one interceptor above a launch site an any given time. “And yet,” conclude my Ploughshares Fund colleagues, Tom Collina and Zack Brown, “the systems could easily be overwhelmed by an adversary launching multiple, inexpensive missiles at once.”

This essential truth—that it is far easier for an adversary to deploy more missiles and counter-measures than it is to deploy expensive defenses—has been known since the dawn of the atomic age. In 1953, President Dwight D. Eisenhower famously warned those who wanted to spend lavishly on defenses:

The awful arithmetic of the atomic bomb doesn't permit of any such easy solution. Even against the most powerful defense, an aggressor in possession of the effective minimum number of atomic bombs for a surprise attack could probably place a sufficient number of his bombs on the chosen targets to cause hideous damage.

President Trump seems to know little of this history. Nor did his advisors restrain him in his rambling, boastful remarks. “We will protect the American people from all types of missile attacks,” he said, “defending against hypersonic and cruise missiles.” Most strikingly, he blew right past the caveats that more sober defense officials had inserted in the written review. “We will ensure that enemy missiles find no sanctuary on Earth or in the skies above.”

These boastful claims actually worsens the very problem the review says it is trying to solve. China and Russia will have to act on our intentions, not just our likely capabilities. They cannot count on the systems not working. They will have to start accelerating their existing offensive programs and increase their nuclear deployment goals. This reality is exactly the opposite of what the review claims when it states, “An adversary’s uncertainty regarding the effectiveness of its attack plans, combined with the prospect of an effective U.S. response to aggression, provide strong incentives for adversary restraint if ever contemplating missile attacks.” No, it does not. It incentivizes more offense.

How do we know? Because that is what we did. The Joint Chiefs were never worried when the Soviet Union first deployed a system of nuclear-armed missile interceptors around Moscow. The Soviets deployed sixty interceptors; we targeted a one hundred warheads on the city. It did not matter if their system worked perfectly; we just overwhelmed it. That is precisely what China and Russia will now do.

They have already begun. When Russian president Vladimir Putin announced five new nuclear weapons programs last year, including hypervelocity glide re-entry vehicles and long-range cruise missiles, he said that he undertook these programs precisely to counter the missile defense efforts of the George W. Bush administration. Russia warned U.S. officials in 2004, Putin said, that Bush’s abrogation of the Anti-Ballistic Missile Treaty in 2002 had removed all restraints from U.S. missile defense and that he would be forced to respond. They didn’t listen then, Putin said, “Well, listen to us now.” China is following suite, with its own new programs to overcome any conceivable U.S. defenses.

Trump has just poured gasoline on an already raging nuclear arms race. Simultaneously, he is removing the few restraints we have on Russia’s weapons. He seems intent on killing the Intermediate Nuclear Forces Treaty and allowing the New START treaty to expire. That means that by 2021, the U.S. and Russia will be without any limitations on offensive nuclear forces for the first time since 1972.

So what should we do? What would a reasonable missile defense program look like? What could Democrats in Congress advocate?

Rep. Adam Smith, the new chairman of the House Armed Services Committee, detailed some core principles just after Trump spoke. “First, it is essential that we ensure we are spending money on programs that are reliable and rigorously tested before they are deployed.” Bing. This common sense procurement approach is not what we do now.

“Second, we must avoid missile defense policies that will fuel a nuclear arms race.” Bing. Again, not what we are doing now. Finally, while Smith supports investing in “proven missile defense systems,” he does not believe that space is the place. These proposed systems, he concludes, have been “studied repeatedly and found to be technologically challenging and prohibitively expensive.” Bing.

We can be even more precise on what a responsible approach to missile defense should look like.

We should dissolve the Missile Defense Agency. The agency, under a variety of names and directors, has proven a deeply flawed development and procurement vehicle. The best chance of restoring balance to the programs is to devolve the various elements back to the services from whence they came. The services are in the best position to weigh the costs and benefits of the systems against other military needs.