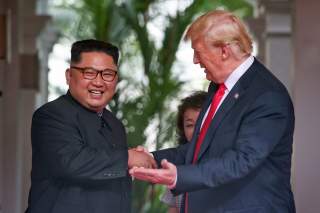 “Anyone can make war, but only the courageous can make peace,” a triumphant President Donald Trump told a news conference Tuesday afternoon in Singapore.

A politician who prides himself on his deal-making ability has secured the biggest moment of his young presidency—the opening touches on a landmark deal with North Korea, and the beginning of detente with Kim Jong-un.

Only a half-year ago, the president was still calling Kim “rocketman”; this week, he toasted their “special bond.”

Polling shows this is popular.

A majority of Americans want U.S. troops to come home from the Korean Peninsula if certain objectives are achieved—namely, denuclearization.

But denuclearization need not be the be-all and end-all—so say the voters. Assiduous politicians, Trump and Secretary of State Mike Pompeo, have likely taken notice.

While before the summit, Democratic leaders—Sens. Chuck Schumer and Nancy Pelosi—openly worried that Trump would give too much away, some Obama and Kerry alumni are quietly lauding the administration’s efforts.

“Let’s take a step back: does the #TrumpKimSummit make war on Korean Peninsula less likely?” asked Perry Cammack, now at the Carnegie Endowment. “I suspect the answer is yes.”

The summit, replete with a snapshot, legitimacy-granting handshake between the two leaders, came under heavy criticism from many establishment Republican intellectuals.

Trump said the young strongman, who ruthlessly consolidated power in his country after the sudden death of his father and predecessor, was “very talented”; his laudatory tone disgusted hawks, as well as liberal internationalists horrified by the president’s seeming willingness to embrace despots.

“One more thing about KJU. While I know @potus is trying to butter him up to get a good deal, #KJU is NOT a talented guy... He is a total weirdo who would not be elected assistant dog catcher in any democracy,” tweeted Sen. Marco Rubio, who derisively referred to the actions thus far as a “deal,” in quotations.

“Any ‘deal’ that doesn’t ultimately bring to an end these atrocities under [Kim] is not a good deal,” he said.

Trump said human rights were discussed at his meeting with Kim, but that they were of second-order concern.

But despite establishment invective, the Trump presidency and his recent moves continue to attract surprise defenders, and broad popular support.

Dennis Rodman, the former NBA player who has befriended Kim, took to CNN, weeping and wearing a “Make America Great Again” hat. He said: “Obama didn't give me the time of day.”

“There are a lot of esoteric takes about the Trump-Kim summit that sidestep the rather important question of whether the talks reduce the likelihood of nuclear war,” said Nate Silver, the founder of FiveThirtyEight.

Restrainers, after months of setbacks including the appointments of John Bolton and Gina Haspel, as well as the secession from the Iran deal, are ebullient.

Pompeo, with eyes on a future presidential run, has been remarkably noninterventionist in preference and language. Pompeo now shares in Trump’s victory.

“I commend President Trump for seizing this opportunity for increased diplomatic engagement and remind him that the U.S. wins as long as we avoid an unnecessary war on the Korean Peninsula,” said Edward King, president of Defense Priorities.

He noted: “There is no doubt about America’s enduring security, which is guaranteed by our overwhelming conventional and nuclear capabilities. Our unmatched deterrent will keep us safe indefinitely from North Korea.”

And at a time Trump is bleeding some allies—namely Justin Trudeau of Canada, and to a lesser extent, Emmanuel Macron of France—the summit won him back some praise.

“We welcome that President Trump and Kim Jong Un have held a constructive summit. This is an important step towards the stability of a region vital to global economic growth and home to thousands of British Nationals and important UK interests,” said British foreign secretary Boris Johnson.

More to come: Trump said “absolutely I will” invite Kim to the White House.