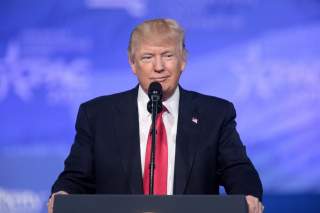 In all likelihood, the president is already under investigation or soon will be. Comey testified to Congress that one of his “leadership team” at the FBI did not want him even to assure the president in private that he was not a subject of the Russia investigation because the inquiry into the Trump campaign’s dealings with Russia might eventually focus on Trump himself. The FBI was prepared to cast a wide net—and now that the investigation is being headed by a special counsel, there are no limits to how wide it will be.

Special counsel investigations have a way of turning into fishing expeditions, as Bill and Hillary Clinton know too well. Kenneth Starr started out in 1994 charged with looking into the Clintons’ Whitewater real estate dealings. But by the time he issued his final report in 1998, he had not only shifted his focus to whether Bill Clinton had perjured himself in testifying about hanky-panky with a White House intern, Monica Lewinsky, he had also investigated everything from Vince Foster’s suicide to the firing of White House travel office personnel, the improper handling of FBI files, and a wide variety of the Clintons’ business activities before Bill became president. The Clintons, who were hardly ethically spotless to begin with, emerged from the ordeal politically unscathed—the GOP lost seats in the 1998 midterms, while Hillary was elected to the Senate in 2000—but habitually paranoid. That was one reason Hillary Clinton kept her email on a private server during her time as secretary of state. Democrats and progressives decried what was done to the Clintons.

Now they are cheering what is rapidly turning into a similarly open-ended inquiry into Donald Trump. The FBI began with a probe into Russian meddling in last year's election. But now, with Robert Mueller appointed as special counsel by Deputy Attorney General Rod Rosenstein, reports in the Washington Post and the president’s own comments on Twitter indicate that investigators are taking on everything from Jared Kushner’s business relationships with Russians to whether President Trump engaged in obstruction of justice by firing Comey. All this only six months into the new administration—what’s to stop Mueller from wandering as far afield as Starr did in the years to come?

Perhaps Trump can avoid it, if it’s true that the president has already considered firing Mueller. Rosenstein told the Senate Appropriations Committee last week that only he himself could cashier the special counsel, and “As long as I’m in this position, he’s not going to be fired without good cause.” But the president can always fire Rosenstein first.

That would not solve his problems, of course. Significantly, the Washington Post claims that even before Mueller’s appointment, the Justice Department had opened an investigation into Trump for possible obstruction of justice. The president evidently faces trouble not just with one or two officials he can fire, but from the Justice Department and FBI more widely.

Yet Donald Trump is used to firing subordinates who don’t get the results he wants. That habit is hurting him in Washington, where even if the president has the legal power to command and dismiss FBI directors and deputy attorney generals, he cannot do so without political repercussions. Firing Comey was a grave mistake. Every development in the story so far, however, lends plausibility to the claim that Trump didn’t fire Comey to terminate the Russia investigation, he did so out of frustration with Comey’s unwillingness to defend him in public. Even Attorney General Jeff Sessions, who as a U.S. senator was Trump’s strongest supporter—and for a time, virtually his only one—among top-ranking elected officials, is reportedly on thin ice with the president, who is angry that Sessions recused himself from overseeing the investigation and didn’t defend the president strongly enough (or press his enemies hard enough) when he testified to Congress to last week. If Trump would seriously consider firing Sessions, it stands to reason that he would dispose of Comey.

With no limits to the investigation, and with the president’s pique leading to ready rationales for expanding the probe, Mueller and his team will inevitably find something. The president’s partisan foes may be disappointed that no evidence of collusion between the 2016 Trump campaign and Moscow emerges. But America’s laws today are a web in which even the most innocuous citizen can get tangled—a citizen who has business dealings with figures as corrupt as many Russian businessmen and officials tend to be is almost certainly open to prosecution on one technicality or another, as is anyone who talks to federal investigators and tells even the smallest of lies. Before becoming a top FBI official, James Comey made his name as U.S. attorney for the Southern District of New York by successfully prosecuting Martha Stewart for conspiracy and obstruction of justice, alongside securities fraud—charges that arose in part because of the way she talked to investigators about her business transactions. If a Comey could throw someone like Martha Stewart behind bars, a Mueller will find grounds for putting someone in Trump’s orbit in jail.

Trump himself probably did not commit obstruction of justice in any legal sense of the term by firing Comey—he had every legal right to do so. Comey himself has not suggested that the president ever tried to pressure him into shutting down the Russia investigation; the most Trump did was to discuss Mike Flynn in such a way as to make clear that he would prefer that Flynn not continue to be a subject of investigation after he had resigned as national security adviser. Such nudging on the president's part was improper—and unwise—but not, as far as anyone has been able to show, illegal.

Yet why would Trump even hint at having Comey let Flynn off the hook? Why would he take such umbrage at Comey’s failure to defend him in public? The president’s opponents suspect that something more serious must lie behind all this, but they have not ventured any plausible account of what crime Trump might want to cover up. And there is another explanation for the president’s heavy-handed behavior: if he cannot even protect a lieutenant as loyal as Flynn from being indicted on technicalities, then what security can anyone else in the administration hope to find in Trump’s favor? What would it tell Trump’s own associates about his power if he failed someone like Flynn? The president’s frustration at Comey, meanwhile, for telling him in private that he (Trump) was not under investigation while refusing to say so in public, is not hard to explain.

President Clinton was not impeached for some nefarious plot, as some right-wingers had imagined, involving the murder of Vince Foster or drugs going through a small airport in Mena, Arkansas. He wasn’t impeached over the complicated and ugly business dealings of the Whitewater affairs. He was impeached for lying about oral sex in a civil lawsuit—an infraction, to be sure, and a disgrace to the integrity of the rule of law. Clinton, of course, survived impeachment, and his opponents paid the price for striking a king, so to speak, without killing him.

President Trump’s future may depend as much on what happens in Georgia’s 6th Congressional District on Tuesday as what Mueller is able to uncover. If the Democrat, Jon Ossoff, wins the special election in Georgia, congressional Republicans will expect a bloodbath in next year’s midterms. Their fear may lead them to turn on Trump—though the close-run defeat of a Trump-like contender for Virginia’s GOP gubernatorial nomination last week makes that less likely. Trump voters are a real power within the Republican Party now, and Republicans who defy Trump cannot count on smooth sailing in primaries. But the GOP may be damned if it sticks with Trump and damned if it tries to run from him, too—it’s not hard to imagine House Republicans getting attacked in primaries by Trump-like candidates who consider incumbents insufficiently ideologically strong, only for incumbents who survive to get slaughtered from the other direction by Democrats who tie them tightly to Trump. One way or another, if the House flips to the Democrats, even if terrified Republicans keep the Senate, impeachment might become a real political possibility.

Trump’s actions so far, including pressuring Comey over Flynn, firing Comey, and tweeting out threats and insults directed at Justice Department officials, have done far more to jeopardize him than the Russia investigation itself has done. The president will be in for a rough time from Mueller, and he will probably not be able to protect all of his close associates—a humiliating predicament for a man like Trump, accustomed to getting his way. But at this point, further pain is inevitable, and trying to avoid it will only lead to more. As the president’s popularity among Republicans declines, while his unpopularity with everyone else remains sky-high, he faces political dangers far in excess of any obvious legal ones, and its his political weakness that exacerbates his legal trouble. Bill Clinton turned the tables on the enemies who impeached him by succeeding politically. Trump will have to do likewise if he is going to survive.