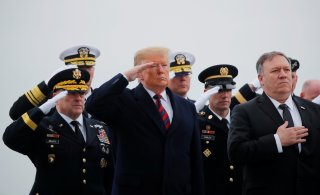 Now that he has been in office for two years, Donald Trump is moving to assert control over foreign affairs. The most prominent members of his original foreign policy team—Rex Tillerson, H.R. McMaster, James N. Mattis and Nikki Haley—are gone. Their departure has provoked consternation among those members of the foreign policy elite who viewed them as the “adults in the room,” as the popular phrase had it, who would restrain Trump himself.

During his first two years, Trump took several steps that appealed to his base—abandoning the Iran nuclear deal, withdrawing from the Paris climate accord, imposing trade tariffs and demanding that NATO allies contribute more financially—but he did not fundamentally reorient American foreign policy. In recent months, with his declarations that he wishes to withdraw American troops from Syria as well as Afghanistan, Trump has signaled that he is returning to the precepts that he enunciated in 2016. But as Trump—besieged by the Russia investigation and stymied on the domestic front—lashes out against his real and perceived enemies, there are ample grounds to wonder whether he can really fulfill his decades-long exhortation for American retrenchment.

There can be no doubting that Trump himself remains undaunted by the serial controversies that have engulfed his administration. Trump, who has never been shy about touting his accomplishments, offered his own assessment of his record this past November in an interview published in the new book by Corey R. Lewandowski and David N. Bossie, Trump’s Enemies. In it, Trump suggested that even Reagan, the most hallowed figure in the modern Republican pantheon, was already eclipsed by him, the sun around which all members of the GOP must now orbit. According to Trump, “the amazing thing is that you have certain people who are conservative Republicans that if my name weren’t Trump, if it were John Smith, they would say I’m the greatest president in history and I blow Ronald Reagan away.” A more qualified verdict was rendered by Henry Kissinger during an interview with Edward Luce of the Financial Times:

I think Trump may be one of those figures in history who appears from time to time to mark the end of an era and to force it to give up its old pretenses. It doesn’t necessarily mean that he knows this, or that he is considering any great alternative. It could just be an accident.

Does Trump indeed mark the end of an era? Or will he prove a transitory figure who created a mere interregnum in America’s quest for primacy after the Cold War? In speaking about America’s purpose, Trump himself has repeatedly made it clear that he seeks to overturn what he regards as the benighted policies of the past. In contrast to his predecessors, Trump has repeatedly disparaged the notion that America is uniquely virtuous. In his inaugural address, he thus signaled that the era of American exceptionalism—the notion that America is an indispensable nation, to borrow former Secretary of State Madeleine Albright’s wording, that can set wrong aright—was coming to an abrupt terminus. “We do not seek to impose our way of life on anyone,” said Trump, “but rather to let it shine as an example. We will shine for everyone to follow.”

In his hostility to the European Union—he referred to it in July as a “foe”—Trump has made it plain that he wants to deal with states on an individual basis when it comes to trade matters, which is why he has urged Britain, among other things, to fulfill Brexit and conclude a separate deal with America. Similarly, he appears to regard America’s European allies as, more often than not, mendacious mendicants who are failing to fulfill their fiscal obligations to NATO, on the one hand, and exploiting America economically, on the other. Like Lord Palmerston, who declared “we have no eternal allies, and no perpetual enemies. Our interests are eternal and perpetual, and those interests it is our duty to follow,” Trump’s inclinations are for independence, not interdependence. As Lord Macaulay put it in an 1845 parliamentary speech on the propriety of sugar duties:

But Trump’s velleities on foreign affairs are one thing. The ability to translate them into actual policies is another. In an essay in Foreign Affairs, Thomas Wright, a senior fellow at the Brookings Institution, discerned an embryonic Trump doctrine:

For the first time, observers can identify a unified, if still incomplete, Trump foreign policy in which the administration accommodates the president’s impulses and seeks to act on them. This unified foreign policy is one in which the Trump administration has no permanent friends and no permanent enemies. It takes a transactional approach with all nations, places little value in historical ties, and seeks immediate benefits ranging from trade and procurement to diplomatic support.

But this unified field theory of Trump foreign policy may inadvertently ascribe more coherence to it than actually exists. On a variety of issues, ranging from Syria to Russia, dissension, not unanimity, appears to characterize the administration’s stands. Director of National Intelligence Daniel Coats testified to the Senate in January that North Korea is unlikely to relinquish its nuclear arsenal. What’s more, CIA director Gina Haspel stated that Iran is complying with the Joint Comprehensive Plan of Action. Trump responded with a belligerent series of tweets chastising the intelligence agencies. In short, the president can propose, but his officials dispose.

Trump’s new crop of cabinet officials has often sought to split the difference with him rather than engage in open confrontation. When Secretary of State Mike Pompeo delivered a speech in Brussels in December, for example, he sought to anneal Trumpian nationalism to a traditional Reaganite crusading foreign policy. He decried the shortcomings of various international organizations, from the European Union to the United Nations, and stated that multilateralism could become an “end in itself.” In a January 24 interview with Martha MacCallum of Fox News, he equivocated when asked whether the United States would come to the aid of new NATO member Montenegro: “I’m not going to get into hypotheticals about what might happen or how a certain scenario might unfold, but make no mistake about it: America has always been there when there were important American and global interests at stake.”

Throughout, Pompeo has made it apparent that he views America as Mr. Big. In Brussels, Pompeo declared,

This is what President Trump is doing. He is returning the United States to its traditional, central leadership role in the world. He sees the world as it is, not as we wish it to be. He knows that nothing can replace the nation-state as the guarantor of democratic freedoms and national interests. He knows, as George H.W. Bush knew, that a safer world has consistently demanded American courage on the world stage.

Pompeo is championing a hawkish posture toward Iran in the conviction that it can lead to internal regime change. Writing in Foreign Affairs, Pompeo extolled the power of “moral clarity”—a term straight out of neocon 101—in dealing with Iran and North Korea: “President Trump’s actions in confronting outlaw regimes stem from the belief that moral confrontation leads to diplomatic conciliation.” One area where Pompeo may be able to claim success is in speeding the departure of American troops from Afghanistan. Special Representative Zalmay Khalilzad is negotiating with the Taliban to secure a peace deal—one that would include an enforcement clause that ensures they oppose any attempts by Al Qaeda or the Islamic State to establish bases in Afghanistan. But as Seth G. Jones carefully explains in this issue, the path to exiting is strewn with serious obstacles.

Then there is National Security Adviser John Bolton. The rumbustious Bolton has targeted international organizations and nuked the Intermediate-Range Nuclear Forces treaty between Washington and Moscow, all with Trump’s approbation. Trump has also rebuffed his efforts to torpedo peace talks with North Korea. But most recently, Bolton has sought to impede Trump’s expressed wish to depart Syria. While meeting in Jerusalem with Israeli prime minister Benjamin Netanyahu in December, Bolton openly contradicted Trump. He indicated that the Trump administration would not exit Syria precipitously. According to Bolton, “There are objectives that we want to accomplish that condition the withdrawal. The timetable flows from the policy decisions that we need to implement.” In addition, the Wall Street Journal has reported that Bolton repeatedly solicited plans for a military attack on Iran, starting in the fall of 2018—a move that alarmed defense department officials. The Trump administration is hardly the first to feature rival factions within its ranks. The Reagan administration, for instance, featured fierce battles between Defense Secretary Caspar Weinberger and Secretary of State George Shultz over the presence of American troops in Lebanon in 1983. But the Trump administration appears to be the first in which the president and his foreign policy team continue, at times, to work at cross purposes.