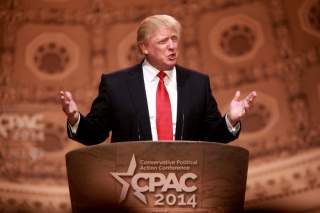 When Donald Trump said the other day, “The Silent Majority is back,” attention turned immediately to the famous Richard Nixon speech of November 1969 in which the president summoned support for his Vietnam war strategy from Americans who weren’t agitating, demonstrating in the street, shouting down opponents, or trying to dominate political discourse through civic aggression. Said Nixon in a nationally television address:

“So tonight, to you, the great silent majority of my fellow Americans, I ask for your support. I pledged in my campaign for the Presidency to end the war in a way that we could win the peace. I have initiated a plan of action which will enable me to keep that pledge. The more support I can have from the American people, the sooner that pledge can be redeemed. For the more divided we are at home, the less likely the enemy is to negotiate in Paris.”

For good measure, the president pointedly sought to draw a stark distinction between this Silent Majority and those seeking to thwart his effort to ‘win the peace” in Vietnam. “North Vietnam cannot defeat or humiliate the United States,” he said slyly. “Only Americans can do that.” He also declared that he would be untrue to his presidential oath if he succumbed to a “minority…who try to impose [their point of view] by mounting demonstrations in the street.”

The speech demonstrated Nixon’s political brilliance. It was an instant success, boosting the president’s approval rating to 81 percent from 50 percent. In the South his approval level reached 86 percent. A few months later Time magazine named “Middle America” as a stand-in for its annual “Man of the Year” feature. The magazine wrote, “In a time of dissent and ‘confrontation,’ the most striking new factor was the emergence of the so-called ‘Silent Majority’ as a powerfully assertive force in U.S. society.”

What Nixon did in calling this Silent Majority to the forefront of the country’s political consciousness was generate a wave of support at his back that allowed him to pursue a delicate and highly risky Vietnam strategy, which was essentially a retreat from that troubled land conducted under harrowing military dangers in country and equally harrowing political dangers at home. He pulled it off and was rewarded with a landslide 1972 reelection victory, compliments of the Silent Majority, in which he captured forty-nine states. Essentially, the Silent Majority took back the reins of governmental power from a loud and boisterous minority.

It is fitting that Trump’s heraldry of today’s Silent Majority should conjure up memories of Nixon, but the matter actually deserves a more wide-angled historical view. The underlying suggestion in Nixon’s call was that the political establishment in Washington had forgotten or neglected majority sentiment in the land. It might be described as a cry of, “Give us back our democracy.”

This may be the most powerful recurrent theme in American political history, the battle cry raised whenever voters have felt—as they are prone to do—that entrenched power in Washington has thwarted the will of the people. The first wave began on February 14, 1825, when word spread through Washington that the new president-elect, John Quincy Adams, had offered the job of secretary of State to Kentucky’s Henry Clay, that wily deal-cutter from the West. As House speaker, Clay had engineered Adams’s ascension to the presidency after the election had been thrown into the House. Now, it appeared, he was getting his reward in the form of a job that was an ideal stepping stone to the White House.

It had all the markings of a final payoff in an unseemly backroom barter. Andrew Jackson, who had led the presidential field in both popular and electoral votes, exploded into a display of public indignation that didn’t end until he had turned Adams out of office nearly four years later. Throughout that time he railed against the Adams-Clay “corrupt bargain,” which he said had thwarted the will of the people.

And consider the political turmoil of the early 1990s, a time when voters were sickened by growing signs of petty corruption and an unresponsive government in Washington—the 1989 pay flap in which members of Congress sought to give themselves a 51 percent pay hike through a parliamentary maneuver that precluded the need for a vote; abuse of a House bank that dispensed interest-free loans to members by allowing them to overdraw their accounts at will; a sense that incumbency had become entrenched in the House.

The result was a series of dramatic political developments—the term-limits movement; the emergence of independent presidential candidate Ross Perot (who garnered 19 percent of the vote in 1992); the reelection defeat of President George H. W. Bush; the large congressional turnover spawned by defeats and pre-emptive retirements; and the congressional takeover by Republicans in 1994. These voter actions constituted a significant wave in that ongoing voter vigilance against power entrenchment in Washington.

These episodes of history all represented the power of the Silent Majority in that the underlying anger that spawned them was largely silent until it erupted with unanticipated force on Election Day. Times of turmoil breed election-year surprises.

It is clear, but little remarked upon, that today we are living through a time of turmoil. The government’s inability to stem the flow of illegal immigration has driven a wedge through the electorate. Congress can’t function as it is supposed to. Acids of indignation eat away at the foundations of our political system. Big labor (largely public-employee unions), big business, big banks, big financial institutions on Wall Street—all have conspired with big government to game the system and get favorable deals in Washington. Dynastic families have emerged with the kind of money-raising prowess, technical skills, talent pools, and command of media time to give them a leg up against any upstarts who might challenge their preeminence.

Consider, for a moment, the Clinton Foundation, an institution that, under the guise of an international do-good enterprise, serves the Clintons in several purposes beyond good works—to get rich through enormous speaking fees from people who want favors from the government; to maintain a government-in-waiting alongside a campaign-in-waiting; to provide carrots and sticks for keeping potential allies in line; to support an international jet-set lifestyle for the Clintons and their closest associates.

If America is heading toward a governmental oligarchy, the Clinton Foundation is Exhibit A.

Meanwhile, the country faces a looming debt crisis and entitlement tsunami that nobody in Washington wants to talk about, and nobody seems to know how to generate anything approaching an adequate amount of economic growth.

So now we have a real estate developer and professional celebrity talking about returning governmental power to the Silent Majority. It sounds like he’s saying what Andrew Jackson said: “Give us back our democracy.”

It isn’t surprising that nobody in Washington or on Wall Street or in the public-employee unions saw it coming. That’s quite typical for such elites basking in their political privilege. But the Silent Majority is beginning to rumble, and Donald Trump is just the kind of man to try to capture that sentiment in his snarling, dismissive, attack-dog manner.

He may or may not succeed. But, whatever happens to Trump in the coming campaign year, the Silent Majority will be around through Election Day.