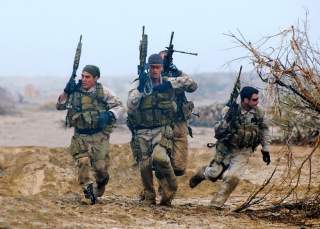 Developments over this last weekend have left many Americans (and many of our allies) wondering about the progress (or lack thereof) of our fight against ISIS. First came news that U.S. Special Operations Forces had conducted a daring raid into Syria, killing a major ISIS leader. Then came word that ISIS had captured the city of Ramadi in Iraq. What does each development mean, and which is more important?

Ramadi is the capital and largest city in the mainly Sunni province of Al Anbar. It was purported to be the place where the Iraqis would turn the tide on ISIS and drive it further to the west, away from Baghdad and eventually out of the country. Instead, ISIS drove what were some of Iraq’s best troops out of the city.

Video footage of Iraqi military units abandoning the city to the bloody hands of ISIS is distressing on both military and humanitarian levels. Only 80 miles from Baghdad, this key population center was going to show that the “good” units of the Iraqi security forces (including Sunni and mixed-confession units) could stand up to the terrorists without the help of Shia militia forces that have Iranian advisors embedded within them.

The Iraqi military was sent packing, despite the assistance of nineteen airstrikes from the U.S.-led coalition. (And, yes, I agree. That’s not exactly an overwhelming number of airstrikes.)

This is a major setback. It is made to appear even worse, because the Pentagon announced in nearly the same breath that ISIS is being driven back. It’s sadly reminiscent of the scene twelve years ago when “Baghdad Bob,” Saddam Hussein’s PR man, proudly announced how badly Iraqi troops were beating the invaders as American tanks rolled into Baghdad in the background. America cannot afford to be seen that way. With the credibility of America’s political leaders already being called into question, the military must be seen as truthful—not as propagandists, trying to sugar coat bad news.

Fighting ISIS will require a much more robust response than has been utilized thus far. Nineteen airstrikes in support of the defense of Ramadi is weak and clearly insufficient. America must up the ante by several orders of magnitude. There is a step between the tepid actions now ongoing and redeploying large conventional American formations. The airpower card must be ramped up tremendously, and greater numbers of Special Operations Forces need to be added into the mix. Yes, they should be used for direct-action missions when the intelligence is there (see below), but they also need to be embedded with the Iraqi and Kurdish forces, the “local boots on the ground.” This will add better training, better combat situational advice, better airpower targeting (and bomb damage assessment) and a powerful “spine stiffener” for our Iraqi allies.

This takes us to the other news of the weekend, the raid by U.S. Special Operations Command Delta operators into Syria to take out a very senior ISIS leader. This was a very “sporty” affair: our aircraft took quite a few rounds, and the operation didn’t end until the raiding troops settled matters in hand-to-hand combat. The hard-won success was complete, including killing the target (it is a bad idea to keep fighting once Delta arrives on the scene), capturing his wife and liberating a young Yazidi woman being held as a slave. The troops also apparently picked up computers, papers and other items that will provide intelligence value.

This action is exactly the kind of high-risk, high-value mission that the Army’s Delta and the Navy’s SEAL Team 6 were meant to do. It takes professionalism, bravery, detailed planning and meticulous execution. Even with all that, they are closely run operations. Unfortunately, Special Mission units seldom win wars. They are needed, and we are justifiably proud of their magnificent deeds. But a discrete mission like this does not “cancel out” the loss of Ramadi.

The raid to take out the Chief Financial Officer of ISIS may result in a great action movie one day, but if we don’t get our own act together (as well as that of our Iraqi allies), last weekend will be remembered as the big step in the fall of Iraq.

The tide must be turned on ISIS. If the Iraqis can’t get the muscle to do it from the United States, they will get it from Iran. Vacillation by the Obama administration is leading Iraq to a choice between radical Sunni-Islamist ISIS, and radical Shia-Islamist Iran. Either outcome is disastrous for Iraq and for the interests of America.